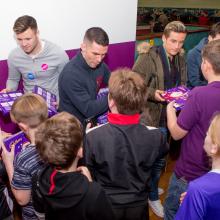 A great party with Mr Barking as well as Sammy the Tammy. Sammy`s Gang and their parents and relations enjoyed first class fun in the Kingdom Suite on Sunday 13th December 2009.

Sammy`s Gang gathered at East End Park on Sunday 14th December for a party with Mr Barking and Scotland`s No.1 Club Mascot, Sammy the Tammy

25 members of Sammys Gang enjoyed their Christmas Party in the presence of their idol Sammy the Tammy. Party Games, Party Foods, Sammy antics and Sammys Story made it a first class party for kids and adults!

Sammy`s Gang had a great afternoon at Sammy`s Christmas Party on Sunday 11th December. Mr Barking got the Party under way with some Christmas antics. He dressed one member up as a snowman and then had lots of little Rudolphs. Sammy arrived in style, larked about with Sammy and then Helen read Sammy`s Christmas Story.