Dunfermline made five changes from the side that started on Saturday. Simon Donnelly retained his place, Gary Mason, Mark Burchill and Noel Hunt were all back and Craig Wilson was preferred to Greg Ross. Andy Tod and Lee Makel were out injured. Iain Campbell was out suspended and Bartosz Tarachulski found himself back on the bench where club captain Scott Thomson was also fit enough to take a seat.

Livingston fielded an unchanged side from the one that started against Rangers the previous Saturday as they tried to prevent Dunfermline make their third League Cup Final.

So it was that the SPL`s bottom two sides came to meet in a prestigious Cup Semi Final. This was the match that few seemed to be interested in but would the sides serve up something to worth missing your Burns Supper for? Livingston kicked off up attacking the goal in front of the Pars fans in the Famous Five Stand. If the tie was going to be decided by the decibels from the audience then going by the pre match it would be a Fife win.

The first shot of the game after 90 seconds came from Steve Hislop after Paul Dalglish had been gifted possession from Yannick Zambernardi but the effort was easily blocked. Another 90 seconds later Darren Young received a neat pass from Donnelly and warmed McKenzie`s hands from 25 yards out. 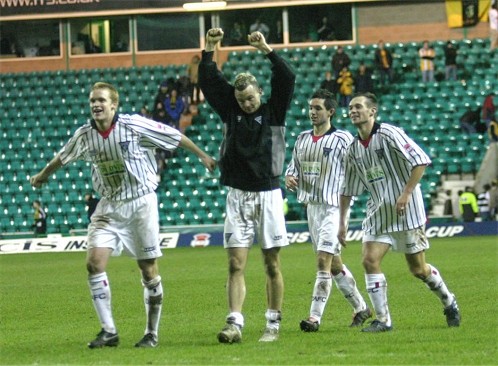 Darren Young putting away the penalty

There was a promising move with Hunt sending Burchill through into the right side of the Livi box in seventh minute but the inviting ball through the penalty box went unaccepted. Dunfermline were down to ten men as Greg Shields received treatment for a nose bleed that required a strip change as Livingston won the first of three corners. Fortunately Shields was back on to block Livi`s best attempt - a David Mackay on target shot from 15 yards.

Another corner for the Lions in 16th minute was held by Allan McGregor after Young had lofted the ball. Dunfermline had a reply with Hunt heading down for Burchill to burst into the top of the Livi box but David McNamee put in a telling tackle to concede a throw in. Livingston were soon in possession again though and a strong run by Dalglish was terminated with a stinging shot that McGregor did well to first parry and then gather.

The 20th minute almost saw Dunfermline take the lead and but for a deflection Burchill might have found the top left of the net. The ex Celtic striker turned Harald Pinxten on the 18 yard line and produced a fine shot that unluckily resulted in only a corner. Craig Wilson`s corner caused mayhem as it slipped through the six yard box but the Livi keeper was able to drop on it.

A fine lay off from McNamee to Dalglish maintained the end to end play and McGregor was relieved to see the Livi no.9 send his low drive beyond the left goalpost. Just before the first half hour expired a Zambernardi pass sent Burchill up the left wing and his return into the box was destined for Hunt in fine position to convert but Richard Brittain got back to send the ball over his own bar for a corner.