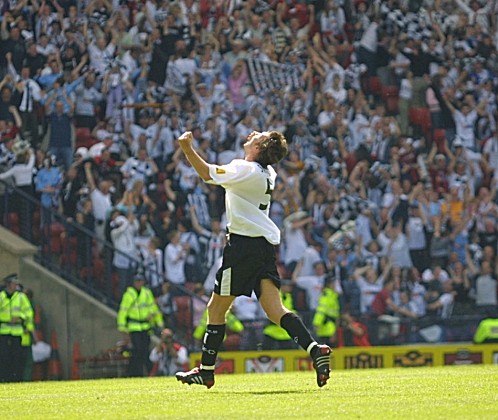 Today we welcome another of the teams we do exchange visits with. We have already travelled to Dens Park with the Young Pars and now it’s the turn of the Junior Dees to visit us. We hope you enjoy your visit – but not as much as the Super Js enjoyed theirs last week! We definitely do not like being beaten at home!

Last week we put the spotlight on Rachel Walker
and this week it is the turn of her brother, Cameron.�
This is Cameron’s first year as a ballboy and he certainly keeps us all
on our toes with his chatter!� Cameron,
like Rachel, has supported the Pars for as long as he can remember and thinks he
went along to his first game when he was about four or five years old.�

His favourite memory so far was when Andrius
Skerla scored during the 2004 Scottish Cup Final against Celtic, even though he
didn’t actually see it as he was at the pie stand with his dad!�
Cameron enjoys being a ballboy and seeing the players shouting and giving
instructions to each other on the park.�

He least enjoys it when it is cold so he’ll
need to put on lots of warm clothes in the coming months!�
Cameron’s favourite player in the present squad is Simon Wiles and his
favourite all time player is Dorus de Vries.�
When asked what he enjoyed most about being in the Young Pars, Cameron
said meeting and talking to the players at Club nights.�

Here’s another chance to enter this
competition which originally appeared in the programme for our CIS Cup game
against St Mirren.� A signed DAFC
football is the prize and all you have to do to win is answer the following
question.


Which
former Pars player is the manager of St Mirren?


Send your answers to Helen Beard,
.� First correct answer drawn from
all the entries will win the signed ball!� Entries
must be received by the end of this month.

To raise funds for the Young Pars, a PartyLite
Candle party is being held on Thursday 20th November in the Kingdom
Suite at 7.30pm.� If you are looking
for ideas for Christmas presents this will be the perfect opportunity to find a
very nice gift for someone – or why not treat yourself!�
This will probably appeal more to female Pars supporters and we would
welcome your support.� Just come
along on the night!