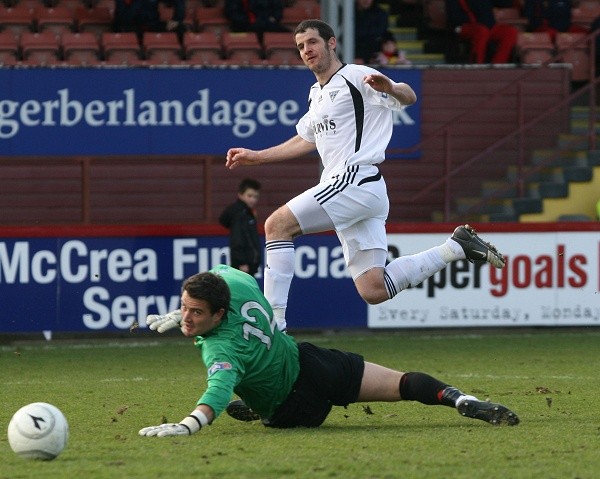 Kevin Harper was missing from the team that faced St Johnstone, Alex Burke and Nick Phinn came in meaning Stephen Simmons found himself on the bench. Mark Burchill missed the game at Perth but he was named as a sub at Firhill.

Thistle made two changes from the side that defeated Dundee in midweek; Stephen McKeown and Mark Roberts starting in place of Kevin McKinlay and Simon Donnelly.

As Partick kicked off the all white Pars were hoping that the Maryhill men might have an eye on the Scottish Cup replay against Rangers the following Sunday. The Jags are the only team to have reached the Quarter Final of the Scottish Cup in each of the last three seasons and with sun kissing the sandfilled Firhill surface, the relatively small ParsĀ support were hoping a cup atmosphere would emerge for this tussle between the teams challenging for fourth place in the league.

The game took some time to produce goalmouth action as the teams got accustomed to the difficult underfoot conditions. Thistle keeper had a couple of clearances but it was the ninth minute before Paul Gallacher got involved and that was just to launch the ball upfield after Roberts was caught offside.

The first danger to the scoresheet was after ten minutes when Scott Thomson hit a free kick from 27 yards that was headed away by the man on the outside of the five man defensive wall. The game still did not ignite with Thistle misplacing passes and failing to make their crosses find a man.Ā Dunfermline looked in better control but still failed to produce openings.

A Rowson pass into space on the left allowed Scott Chaplain to break into the penalty box but Greg Shields` excellent block removed the need for Gallacher to be brought into serious deployment. In 18 minutes Stephen Glass launched a shot from 30 yards that Jonny Tuffey held diving to his left.

Stevie Crawford blasted the ball into the net on 25 minutes after Muirhead had picked out McIntyre in the box but he was clearly offside. Next minute the Pars striker belted a fierce shot in from the right but when the keeper saved Phinn put the ball behind. Possibly the best chance of the match this far.

Damon Gray launched a 25 yard chance over the crossbar after a slip up in the Pars midfield and McIntyre glanced a Glass free kick wide of Tuffey`s left hand post. Stephen McKeown received a lay off from Roberts to shoot on target but a defender took the sting out of it before Gallacher gathered.

The first corner of the game in 37th minute produced a great opportunity for Thomson to score his first goal since October 2004.Ā Glass` delivery was headed into the six yard box by Wilson and Crawford, back to goal, passed it for Nipper to blast but his sights were too high and ball sailed over the bar.

Just before the interval Stephen Simmons had to come on for Greg Shields who suffered a calf strainĀ and then, just at the right time, Stevie CRAWFORD fired the Pars ahead.Ā A simple ball from the gaffer out to the right side put Craw through one on one with the keeper and he finished with a low drive into the bottom left.Ā The Pars deservedly led at half time.

Thistle boss Ian McCall made two substitutions before the resumption - Stevie Murray and Kevin McKinlay coming on for Chaplain and Twaddle but it was Muirhead who created the first danger of note in the second half. ScottĀ sent over a cross from the left flank that Crawford challenged Tuffey for but he was penalised for it and Phinn was not allowed to capitalise from 15 yards.

Gallacher fisted away Thistle`s first corner in 61st minute but Dunfermline seemed to be getting pushed further and further back. Referee O`Reilly was not endearing himself to the Firhill fans and this helped to raise the atmosphere. Gary Harkins swung the ball out left to Murray but Gallacher easily held the wee man`s effort.

A Donnelly free kick and then a Donnelly corner were headed clear before a loud appeal from the home fans when another ball from the former Par appeared to play Young`s hand in the box. Thistle were beginning to dictate play and had the territorial advantage as the game entered into the final quarter.

SimmonsĀ forced the Pars first corner of the second 45 in 76th minute from a Thomson free kick but that was headed away and then Crawford crossed but Phinn`s header was stopped by Tuffey. Jim McIntyre then withdrew himself in favour of Mark Burchill.

The visitors seemed to have stifled the push from their opponentsĀ as they began to enjoy much more of the play. Ā Glass fed Burchill in 82 and the Pars sub made Tuffey pull off a fine save to turn the ball over the crossbar. Thistle`s only response was an overstruck cross from Murray that Gallacher held under pressure from the opposing strikers.

Burke broke from half way in 86th minute but Tuffey did well holding the shot on the angle from 15 yards. Iam McCall`s side was feeling the effects of their third game in eight days but mounted one final push but the Pars held out for an important victory.