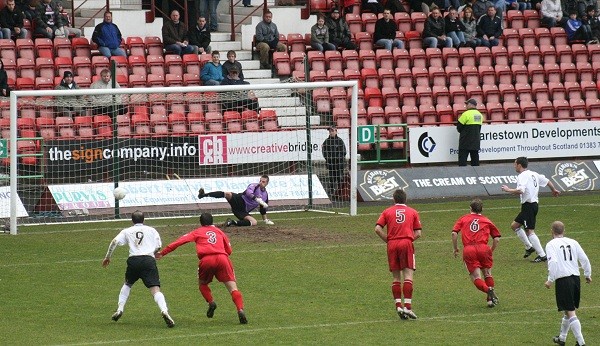 Dunfermline were� denied the services of � Kevin Harper who was serving a one match suspension as they took on Clyde with a� win� required to take them into fourth place above Queen of the South.� Having disposed of Jimmy Calderwood`s Aberdeen they have now much more important matters in mind but Clyde were fighting to keep out of the play offs.� John Brown� made one change - Gary Arbuckle coming in for Gary McSwegan.

The Pars kicked off but for most of the opening five minutes spent that defending the goal in front of their own fans in the McCathie Stand. Clyde had the first corner of the game and then� Jorg Albertz lined up for his first crack at goal from a sixth minute free kick but failed to get the ball passed the defence.

Clyde forced another corner and with Scott Wilson off the park following treatment his colleagues survived. Fifteen minutes had come and gone before the home side threatened to bring keeper David Hutton into the match. When Jim McIntyre was fouled midway into the opposition half, Stephen Glass was able to float the ball from the free kick towards Scott Thomson he headed down for the strikers in the six yard box but the offside flag was up.

Marvin Wilson was yellow carded for his challenge on Scott Muirhead and the former Don required to leave the field for treatment. A 27th minute corner, the Pars first of the game was the first excitement for the by then very quiet Pars support but Glass`s delivery eventually generated another but that was cleared easily.

Minutes later Alex Burke had the first serious effort at the Clyde goal but he was off target from eight yards out. The pressure was maintained with a 30th minute corner that Glass sent over again from the right only for the visiting defence to come out on top. Albertz flighted in another free kick from 35 yards out and former Pars youth player Pat Clarke directed that over the crossbar.

A fine diagonal ball through the six yard box from the right foot of Simmons invited McIntyre and Crawford to touch it in but neither managed to grab the chance. Five minutes from the break Jorg Albertz fired one of his classics; from a twelve step run up he rocketed a free kick from 30 yards that must have grazed the right post on the trajectory behind.

In 43rd minute Jim McIntyre attempted to direct an Alex Burke cross past Hutton but he was high over the bar. It had not been a thrilling first half with the Bully Wee probably shading it on last third action. The exodus for the Steak Bridies begun long before Clyde struck in the first minute of time added.�

Marvin Wilson lofted a high ball in from the right and CLARKE met the ball in the centre of the Pars penalty box to drive in beyond Gallacher.

Iain Williamson replaced Stephen Simmons at the restart and Clyde had won a corner before they got punished on the break.� Stevie Crawford took advantage of a miskick by Marvin Wilson to speed in on goal.� He had Higgins and Gibson at either side of him but Gibson`s tackle saw Crawford spilled and Alan Muir pointed to the penalty spot.

After two consultations with the north side assistant the award stood and Stephen GLASS converted with a left footed shot to the keeper`s left.� The goal lifted the Pars and next Darren Young fed� Burke and his cross picked out McIntyre but he could only win a corner. This was a different Dunfermline team in the second half with their passes being completed and much more positive play.

Wilson headed over a Glass corner from the left and next Burke as he picked his spot, was closed out by Gibson.� � Glass fired the resultant corner in and Williamson headed that over the crossbar. The Pars duly got their second goal however after Williamson sent Crawford deep down the right.� Stevie rounded the full back and cut back from the bye line to Jim McINTYRE virtually unmarked eight yards out, and he made no mistake finding the net to the keeper`s right.

In 75th minute a cross from the right again from Crawford was headed down by McIntyre but Williamson sent the good chance wide of the left post. Clyde introduced David McGowan for David McKay with ten minutes to go and almost deflected Pat Clarke`s drive from 20 yards into the net but Gallacher did really well to save.

Clyde maybe aware that Morton were drawing 2-2� at McDiarmid Park continued to push for their equaliser. Burke sliced a clearance that his keeper held and then� a backheader from Wilson nearly let Clarke in before Gallacher but the keeper was quicker.

Clyde were not to alter the scoreline� although Gallacher was kept involved� to the end. Dunfermline took all three points to take them into fourth position.