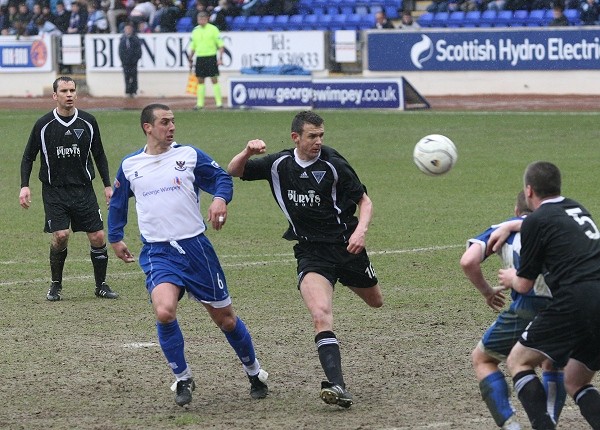 Jim McIntyre had Stephen Glass back after his one match suspension but a muscle strain to Mark Burchill and a bruised foot to Nick Phinn meant that the player/managerĀ came in to startĀ only his fourth game of the season.Ā Greg Shields also returned at right back to face a St Johnstone side that made four changes from the one that lost at home in midweek to Clyde.Ā


Derek McInnes`s sideĀ was without Greg Cameron because of an knee injury, while David Weatherston, Barry Wilson and Kevin MoonĀ dropped to the bench. Into the Saints starting eleven came Goran Stanic, Peter MacDonald, Andy Jackson and Jody Morris after the birth of his son.


Just a little over two thousand fans braved the elements to see what wouldĀ have been, at the start of the season, viewed as a battle between two favourites for the title. The season has not panned out as planned for either team however and consequently few were prepared to make the trip for what turned to be another predictably drab encounter.


With the sky opening shortly before kick-off, leaving huge parts of theĀ wings inhospitable, it was inevitable that play was squeezed into the centre of the park and all the poorer for it. Jackson and Milne createdĀ half-chances for the home side and a corner kick opened the door for midweek hero Harper for the Pars, but all three efforts failed to cause any real concern for the goalkeepers.


It was not until twenty minutes into the game that the first clear-cut opportunity was created and even then it stemmed more from luck than design. Paul Sheerin attempted a shot from the edge of the box but scuffed it so badly that upon leaving his foot it transformed from a shot into an inch-perfect pass. Milne collected, somehow finding himself unmarked justĀ eight yards from the Pars goal but to the disbelief of all parties he
managed to send his shot wide.


Pars did their best to make the Saints rue the missed opportunity with firstĀ Shields firing a long range drive safely into Main`s arms. The Pars` best effort followed, with a similar effort from Harper forcing Main into aĀ fingertip save.


The Pars were restricted to such hopeful efforts while St Johnstone looked more dangerous and it was only a matter of time before the home team took the lead. From a free kick on the right wing Paul Sheerin played a terrific ball to the back post where Allan McMANUS was on hand to direct it into the net from close range.

The Pars were not at the races in the first half and had Peter MacDonald not sent a header just wide of Gallacher`s post with five minutes remaining, the game might have been killed off.

Opening up the play by using the wings more in the second half, the Pars were a much better prospect but only after narrowly avoiding disaster in the opening minutes of the half.

A mistake from Simmons allowed Milne through on goal only for Gallacher to come to the rescue with a fantastic save to sent his effort wide of the post. Gallacher was quick off his line minutes later to deny MacDonald at the edge of the box but had to rely on Scott Thomson to clear when Sheerin latched onto the rebound with the keeper still in no man`s land.

While the Pars improved, Saints continued to see more goalmouth activity inĀ their favour and Rutkiewicz and McManus both saw headers wide of the target.

With the first clear goalscoring opportunity the Pars created, they equalised. A terrific tackle by Darren Young at the edge of his own box saw the ball break to Shields, who swept the ball clear up the pitch to be flicked on by McIntyre.

Stevie CRAWFORD ran the ball into the box with McManus at his heels and held off the defender`s attention long enough to coolly slot the ball past Main from a tight angle.

The Pars survived a last minute scare courtesy of St Johnstone`s substitutes when Wilson blocked a shot from Moon and had to watch as Robson received the rebound. His shot went narrowly wide however and the Pars escaped with a share of the spoils courtesy of their ninth one-each scoreline in the league this season.