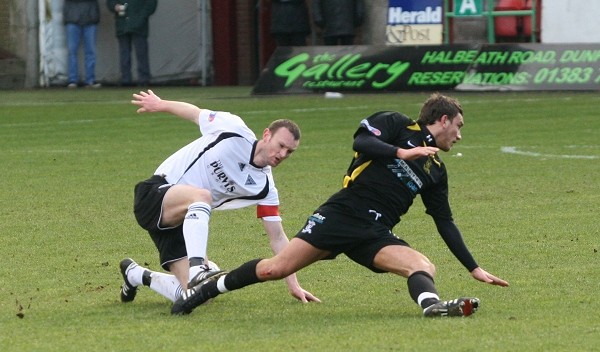 Kevin Harper returned for the Pars having served his one match suspension and that meant Nick Phinn was put back on the bench. Livingston made no changes from the team that lost 3-1 the previous week at Hamilton.

Dunfermline kicked off attacking the goal at the Cowdenbeath end with the wind and rain on their backs. Conditions were wretched but a glimmer of sunshine appeared as Stevie Crawford put in the first shot of the afternoon on six minutes. He ran on to a Stephen Simmons header but the ball went wide right.

There were weak appeals for a penalty just two minutes later when Cammy MacDonald eased Simmons off the ball but then Livi forced two corners that failed to place the defence under too much pressure in clear.

The Pars got the breakthrough in 13th minute when Crawford picked out BURKE. The on loan player evaded the challenge of two defenders before drilling the ball into the bottom left from the edge of the area. A well taken goal for his first in a Dunfermline strip.

Harper`s cross into the box five minutes later was turned away for the first home corner of the game but Stephen Glass` delivery did not turn out to endanger the Livi goal. Lee Makel and Liam Fox tried an exchange on the edge of the Dunfermline box but when Chris Malone got the break off Simmons he hammered his shot into the McCathie Stand.

In 24th minute Graham Dorrans made a marauding run in from the right setting up Robert Snodgrass with a shot at goal from 18 yards. The ball broke off the defence and DORRANS, 15 yards out, was left with a clear view of the net and drove home at the left goalpost.

A Fox-Snodgrass-Griffiths move won Livi a corner in 28 minutes and from James` delivery MacDonald headed powerfully down to the right post where Scott Morrison was stationed and he blocked the effort. Next Dorrans launched a shot from just outside the box that Griffiths just failed make a connection with and then Griffiths released a low shot at goal that Gallacher touched around his right hand post.

From the shock of going behind the West Lothian side were taking a real grip of the game with Lee Makel a significant contributor. Burke found himself conceding another corner as David Mackay pushed up and then when Dunfermline next got forward they froze. Burke received a short pass from Morrison that he sent through the six yard box. Eventually it was Harper that tried to net but James got in the way.

With 38 minutes on the clock Calum Woods nearly made it 2-1 as his high cross from the right touchline got caught in the wind, bounced in the six yard box and over the crossbar. Simmons put Crawford through in 44th minute but James McPake`s last man tackle 20 yards out did the business for the visitors.

The teams were out sharpish to resume but sadly those filtering back out from the lounges, as much as five minutes late, missed very little. The first real noteworthy action came in 54th minute when Crawford switched a clever ball right to Woods and on to Harper on the wing midway inside the opposition half. Unfortunately James dispossessed the winger and played a superb ball through for Snodgrass to head on goal with. Much to the undoubted relief of Kevin Harper, his shot from the left side cleared the right post.

Nick Phinn then replaced Harper and immediately Dunfermline created a chance through the middle with Glass and Burchill combining to set up Crawford with a blast from 20 yards that sadly soared over the crossbar.

Dorrans produced a cross that kept Gallacher alert but only a Woods cross promised anything for the Fifers as the painfully cold spectators grew quieter and quieter. In 65th minute there maybe should have been more to cheer after Morrison`s pass to Burke was swept into the Livingston penalty box but Simmons diving header went wide left.

A Pars free kick from Glass and a Burchill cross from the byeline brought no better but then then a long ball through the middle saw Crawford and McPake chasing towards Stewart. Willie Collum adjudged the Livi no.4 to have taken the ball as Craw tumbled 16 yards out.

More pressure was then created by Burke and Mark Burchill got two bites at shooting but neither were to penetrate the visitors defence. Morrison tried a long range effort in 77th minute but was well wide and high while at the other end Liam Fox was well offside as he swept the ball beyond Gallacher.

The match drew to a conclusion with offside decisions frustrating the Pars and Livingston attempts being dealt with by theĀ home defence.Ā A Glass free kick after sub Willis had been challenged by James did not bring a winning chance and in 93rd minute Stephen Simmons need treatment after an accidental clash.

Livingston`s drum did not make the trip over the Forth, the match lacked atmosphere, the weather was most unpleasant and on the park the game lacked the fight of real competition. Even Referee Willie Collum with an average of 4 cards from his 24 matches this season could not get excited enough to give even one an airing.