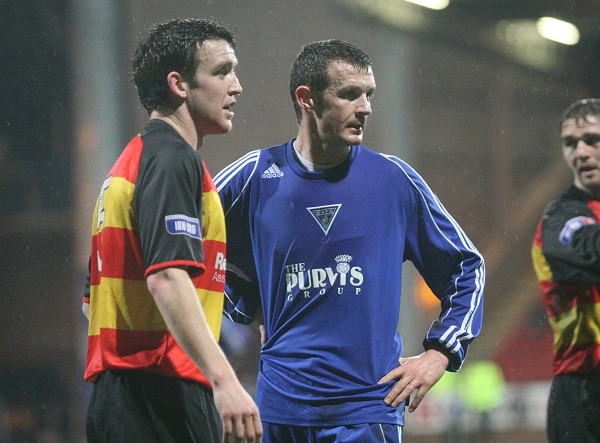 Dunfermline were without Darren Young, Greg Ross, Jamie Harris and Danny Murphy from the side that lost on Saturday. Jim McIntyre started himself along with Kevin Harper and Calum Woods and Stephen Glass. Thistle were unchanged from the team that thrashed table toppers Hamilton in their last outing.

Had global warming reached Firhill the pitch might have been sown with rice but Jim Hamilton kicked off this Scottish Cup tie on an extremely sticky pudding of a surface that was supposed to be a football pitch. The conditions did not deter Dunfermline putting in a promising start with Harper centering for Burchill but the ball arrived behind him and the Thistle defence were let off.

In sixth minute McIntyre laid the ball off to Scott Morrison and he turned his marker before sending in another useful cross that Tuffey had to move to collect. Next Burchill broke into the box trailed by John Robertson and Tuffey came out to block the shot. Two minutes later in the 16th Burchy had a headed effort that the keeper held.

Thistle`s first shot at goal took just over 19 minutes to come; Scott Chaplain launching the ball well over the crossbar in true Glasgow Warriors style from 30 yards. Play was soon back at the City Centre end with Burchill supplying Hamilton with an opportunity to shoot but he was wide.

McIntyre and Morrison combined well on the left as they tried to drive through the Thistle defence but Morrison`s final ball to Stephen Simmons failed to find the tall midfielder. In 33 minutes a fine pass from McIntyre to Burchill was turned into the path of Glass and it would have been a spectacular goal had his rocket of a shot from 25 yards been on target.

The home support were growing increasingly frustrated and the Fifers offside trap did not help their patience either. It proved very effective and the visitors approach to the game appeared to be very much more practical. Thistle won their first corner of the night with just three minutes to the break but Paul Gallacher was happy to rise and clutch the delivery from the left.

Hammy thumped another McIntyre lay off over the crossbar before Woods and Rowson crashed in a challenge 27 yards out. Referee Scott McDonald had no hesitation in awarding the home side the free kick. After treatment to the full back and a yellow card to make him feel all the better Gary Harkins stepped forward and converted the setpiece over the five man wall and the crossbar.

Dunfermline were by far the better team in the first half but at the break the score remained equal.

Thistle had the first attempt of the second 45 but Liam Buchanan was woefully wide from 25 yards out. When Jim McIntyre was dumped on the left 40 yards out Stephen Glass was handed another chance to pump the ball into the opposition box. He gave the ball a real whack but it dropped perfectly for Scott WILSON to head the ball into the left side of the Jags net. Only disappointment with the 49th minute goal was Mark Burchill picking up a caution for his celebration.

Four minutes later Thomson handled the ball on the edge of the box and Thistle were unlucky when Chaplain touched the ball to Harkins for a real go but the five man wall managed to deflect the ball away and Simmons put it behind for a corner as it narrowly evaded a follow up challenge from a Thistle head.

Back to the other end and a Glass corner picked out Simmons but his header was off target and cleared by the defence. The cup tie atmosphere spurred the Jags to reply and Ian McCall made a double substitution bringing on Stevie Murray and Paul Keegan. Chaplain was unlucky when Mark Roberts chested down the ball to him just eight yards out but the defence reacted quicker and the chance was lost.

Jim Hamilton`s headed attempt to clear a Murray free kick from the right caused problems as it sailed towards his own goal. Gallacher couldn`t get to it but McIntyre cleared it off the line and then there was an almighty scramble in the six yard box that eventually the Pars won.

Two minutes later however in the 68th the Jags stung. Roberts swept the ball wide to Liam BUCHANAN on the right side of the penalty box and the striker drilled the ball low past Gallacher into the far corner of the net.

Things looked a lot worse in 77th minute when Chaplain drove the ball low into the bottom right but the `goal` was chalked off for offside much to the surprise of the celebrating home support. Partick had the ball in the net minutes later at a free kick on the edge of the box but Chaplain`s drive came after the ref had already blown up for the premature advancing of the Pars wall. The second attempt from Chaplain hit the wall.

Thistle piled on the pressure and the blue shirted defence seemed to be continually heading the ball away. McIntyre was able to swing over an inviting ball for Tam McManus but his header dropped wide.

Disaster then struck as the Glasgow team scrambled a scrappy goal three minutes from time. Wilson was yellow carded in giving Thistle a free kick out on the left and then Woods failed to clear properly, Rowson had a shot that was blocked but the ball was deflected right off Morrison and BUCHANAN stuffed the ball towards the net. The spinning ball trickled over the line and Dunfermline were left to lament their missed chances as they were knocked out by Thistle for the first time in nine Scottish Cup meetings.