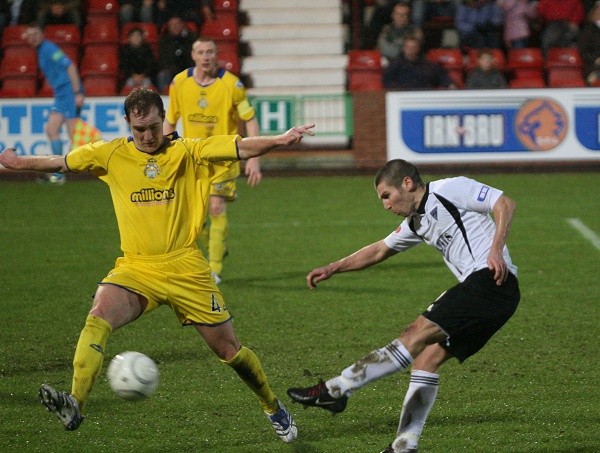 Danny Murphy served his one Cup match ban in midweek and serves another SFL match ban after 2nd February so he returned to make his final appearance for the Pars against Morton. Scott Morrison dropped out to make way for him. Morton made two changes from the team that lost 3-0 at home to Queen of the South. Stewart Greacen and Kevin Finlayson came in for Peter Weatherson and Jamie Stevenson.

All in yellow, Morton kicked off and in the opening minutes pressed forward meaning that Paul Gallacher was the first keeper to touch the ball. He was required to punch away a Scott McLaughlin free kick in from the left before a Stephen Simmons interception allowed the home team to build up an attack. Mark Burchill exchanged passes to eventually tee up Kevin Harper for a cross into the penalty box that the Morton defence were able to deal with.

In 10th minute Jamie McAllistair conceded a throw in down near the right corner flag but Calum Woods throw to Jim Hamilton was taken away by one of the two Greenock men that were policing him. Four minutes later a Harper cross turned into a shot and McGurn turned the ball over his crossbar for the first corner of the match but unfortunately that was all too easily defended.

Another was won two minutes later. This time Stephen Glass` delivery found Scott Thomson eight yards out but he headed wide of target. There was 21 minutes on the clock when Danny Murphy centred for Burchill to head down on target but David McGurn had no problem in gathering the ball.

Dunfermline were finding it hard to break down the solid Morton defence but in 25 minutes a McIntyre cross from the left byeline caused McGurn some concern as it dipped into him but he touched that clear to his left only for Harper to follow up with a cross that Hamilton headed down but McGurn pulled off a great save to tip the ball away to his left.

On the half hour Burchill laid a nice ball into the path of Harper on the edge of the D but McIntyre just couldn`t quite connect with the final pass and the chance was gone. Morton could not get near to the Pars box and Chris Millar was forced to shoot from 25 yards out on the right but was well off target.

Murphy was dumped by Millar midway into his opponents half but Jim McIntyre headed Glass` free kick over the crossbar. Burchill had a pop at goal but was high and the route to the net was proving difficult to find.

A 41st minute corner kick was fisted away by McGurn and after surviving a long ball to Iain Russell that left Wilson and Gallacher wondering who was taking it the score remained goalless at the break.Â Former Scotsport commentator Arthur Montford was here in his capacity as Morton director but sadly there was nothing to describe in hisÂ vocabulary as a `stramash`.

It took the second half four minutes to heat up. Ryan Harding was twice instrumental in thwarting Burchill`s efforts and then a Simmons drive on a Murphy cross came back off McLaughlin with the Morton no.3 knowing little about it. The home support broke into song and they were soon to have plenty more to cheer about.

David McGurn was responsible for keeping the Pars out in the first 45 but he could do nothing to stop a SIMMONS volley in 51st minute. Again Murphy provided the opportunity swinging in a diagonal ball from the left and the ex Hearts man finished in style from ten yards out.

The rain poured down as Peter Weatherson came on up front for the visitors but the Pars should have increased their lead in 61 minutes when a Glass corner from the left landed nicely for Simmons. Running in at the far post he tried to place the shot instead of blasting it and the ball was cleared off the line.

Morton tried hard to get back at Dunfermline sending their big men up for a 70th minute corner that almost caused problems when Glass` clearance came back off McAllister. McLaughlin was left an opportunity from 20 yards but shot wide left. Nick Phinn then replaced Jim McIntyre and Jamie Harris soon after came on for Scott Thomson.

Murphy fed the ball to Burchill 25 yards out, he turned and shot inches over the Morton crossbar. While Dunfermline looked comfortably ahead the small margin of advantage gave the home support some anxiety as the Clydesiders kept up the offensive. All that dissolved when Stephen GLASS notched goal number two in the 84th minute.

It was a nice move from the Pars. Sub Stevie Crawford squared the ball to Phinn who played the ball off Burchill to feed the goalscorer. The shot went in off the right post and although Morton cleared the ball away the Assistant Referee on the North Stand side was in no doubt signalling the goal as he raced back to the centre.

Burchill wide of target by the narrowest of margins. On 90 minutes Gallacher required treatment but otherwise the match drew to a satisfactory conclusion.