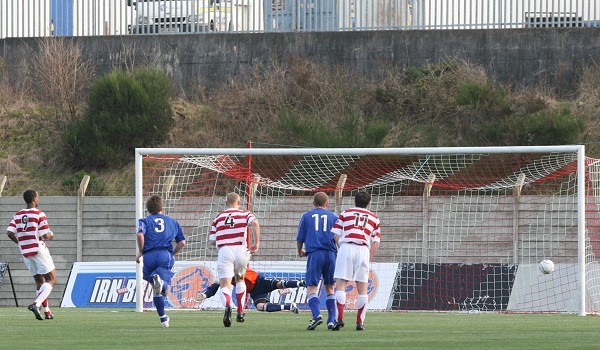 Sol Bamba, Stevie Crawford, Scott Morrison and Alex Burke came in for Dunfermline who were without Scott Thomson, Danny Murphy, Jim Hamilton and Jim McIntyre from the team that started against Morton. Hamilton made three changes, leaving out Tony Stevenson, James McCarthy and Mark McLaughlin to bring in Chris Swailes, David Elbert and Alex Neil.

After a step ladder was needed to fix the net in front of the stand that housed the few hundred who had travelled through from Fife, the match got underway with the Pars attacking the goal in front of their fans. Early play was towards Bryn Halliwell with Kevin Harper playing a one two off Mark Burchill before getting squeezed out as he was about to shoot.

Bamba conceded a fourth minute corner that was the first of four in two minutes. The defence held out and from a fifth David Graham`s shot was deflected wide for another.

Dunfermline countered in the eighth minute when good style from Crawford despatched Alex Burke up the left. The on loan player`s shot beat the keeper but Brian Easton cleared off the line. Easton started an attack that took him up the left but fortunately for the visitors his final ball was overstruck.

In 12th minute Bamba`s challenge on David Graham on the left side of the box won Accies a soft penalty. Richard OFFIONG sent the ball into the right side of the net and the home side were one up. The lead could have quickly doubled when Offiong was through next minute but this time Bamba blocked his shot.

Mark Burchill was put through on Halliwell in 17th minute but the former Pars keeper managed to blot out the striker`s well connected effort.

It was ten minutes more before either keeper had much to do but Paul Gallacher was glad to see Mark Gilhaney`s 20 yard shot bounce back out of his arms to one of his defenders. Tom Parratt was deep inside the Pars box to cut back a good ball for James McArthur but somehow the young Under 21 internationalist managed to divert the ball wide of the near post.

A direct run at goal in 30 minutes from Sol Bamba won Dunfermline a free kick on the edge of the box but Stephen Glass` attempt cleared the six man wall and the crossbar. Five minutes later Hamilton caught the Pars on the break. Again it was Easton who made all the ground down his left. The tall left back travelled deep before cutting the ball back for an easy conversion for OFFIONG.

When Woods dragged down Easton six minutes from the break, Parratt delivered another dangerous ball into the Pars box that Offiong backheaded narrowly wide of the right goalpost. In 42nd minute Stevie Crawford came close to closing the gap but his 25 yard shot rebounded back off the left upright. Instead Hamilton were to pile on the Fifers misery.

A James McArthur driving run beat off the challenges of Simmons and MorrisonÂ as he entered the Pars half providing Graham with a pass that let him race in on Gallacher. His shot was stopped but the rebound fell nicely for OFFIONG to prod the ball home despite the desperate attempts of Bamba, Wilson and Morrison to stop him. Two minutes before half time and 3-0 to the league leaders. There had been no need to fix the net at the Pars end.

Nick Phinn was a half time substitution for Stephen Simmons who had limped off at the end of the first half but Hamilton took up from where they had left off. Glass was dispossessed in the centre circle and Offiong was through with the Dunfermline central defenders trailing him. Fortunately his shot from just outside the box was deflected off the Pars captain for a corner.

Hamilton kept up the pressure on their opponents with a corner and a free kick, both from the left, causing some concern for the defence. Burchill earned his defence some breathing time when he won a corner on the right but Halliwell fisted away Glass` cross.

Three yellow cards in three minutes demonstrated that neither team were going to concede that the match was all over. It was for Crawford however as Tam McManus came on for him with a quarter of the game remaining.

In 68th minute Gilhaney linked well with Easton and his ball into the Pars box only just evaded Offiong, the striker touching the ball around the far post. When McManus picked up a yellow for a crude tackle on the left touchline Parratt was allowed another chance to pump a high ball into the six yard box . Hamilton failed to cash in but at the other end Dunfermline were still searching for their first serious attempt of the second 45 on the Accies goal.

It was 85th minute before a Burchill shot was deflected on to the roof of the net and then Bamba and Wilson tried to make the corner count before Phinn had the ball pinched off him as he was about to release a shot.

Phinn did direct a cleared ball over Halliwell but it was over the crossbar. In the end Dunfermline, like all of Hamilton`s opponents since 22nd September, left New Douglas Park without scoring a goal. Accies certainly know how to make the most of home advantage but they might need to start planning to rip up that plastic if the SPL is to be their next step.