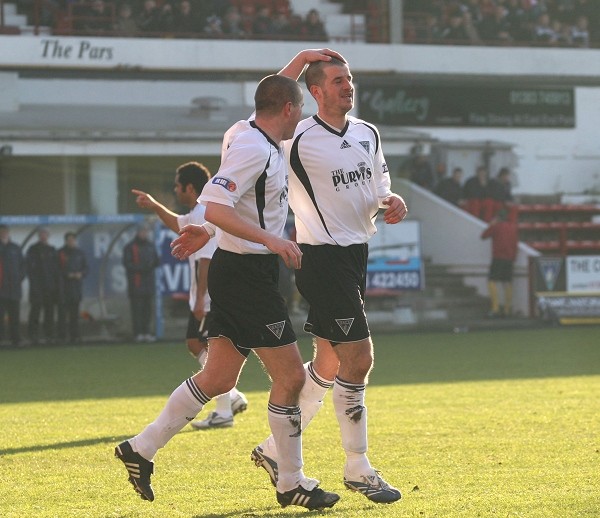 Scott Thomson returned after a virus kept him out of the Hamilton game. Sol Bamba dropped on to the bench where young Paul Willis was included for the first time. For the visitors only six survived in their starting line up from the eleven that played Livingston in midweek. Kevin McKinlay, Willie Kinniburgh, Ryan McStay, Steven McKeown and Czech striker Viteszlav Mooc coming in for the Jags.

Sunshine bathed the north east quarter of the park as Mark Burchill and Stevie Crawford got the game underway. It was Thistle who were first into attack however with Kevin McKinlay swinging in a useful delivery from the left byeline.

Dunfermline quickly managed to take play to the other end with Kevin Harper and Burchill slightly unlucky in their attempts to penetrate the Thistle defence. In 11 minutes keeper Jonny Tuffey came out to try and beat Burchill to a long ball up the left. Burchill`s touch took it past the keeper 25 yards out and he managed to prevent the ball going out before centering. The defence headed behind for a corner on the right.

When Stephen Glass sent the ball into the six yard box there were groans of disappointment as no one took advantage but when the ball came out to Stevie CRAWFORD he hit the net from 10 yards out. Craw`s first goal since scoring from the penalty spot against Kilmarnock 365 days before.

Three minutes later on the quarter hour David Rowson earned the first card of the afternoon when he crunched Stephen Simmons 25 yards out on the right side. Glass took the free kick forcing Tuffey to hold. Next Crawford fired another good effort wide to the right of goal.

Dunfermline kept up the pressure with a 20th minute free kick McStay this time flattened Simmons. Simmons, Glass and Morrison took a while to decide the strategy but eventually Morrison drove the ball into the visitors box where Burchill was unlucky not to take the chance as it ricocheted off the defence.

Another Burchill attempt from an acute angle in 25 minutes went narrowly wide and then silky stuff from Crawford beating Mark Twaddle sent over the ball that just needed a touch for goal number two. Unfortunately it was Alex Burke and not the ball that ended up in the net.

The visitors were forced to bring on Stevie Murray in 30 minutes after Kevin McKinlay was stretchered off and still the Pars pushed forward. Burchill and Simmons fought for the chance on the right side of the visitors box but it was Crawford who got the shot in at the near post with Tuffey taking it at his second attempt.

A Burke cross from the left almost sat up nicely for another Burchill crack at goal but then Thistle had one of their rare moments when Simon Donnelly challenged Paul Gallacher as Thomson`s header back proved to be a pound light.

Territorially Dunfermline were well on top. More chances and better chances had come the Fifers way and it felt like they were well ahead yet at the interval they were just the one goal ahead.

53 seconds was all it took to witness the Pars create the first opportunity of the second 45. Thomson`s free kick was met first time by Harper on the right touchline to pick out Crawford and his clever back heeler sent Harper in on goal but somehow his shot slipped across the face of goal and out.

In 51st minute Kevin Harper went through Mark Twaddle in a tackle right in front of the Partick support in the North East Stand and Referee Brian Winter did his bit to create an edge on the match by showing the Pars no.7 a red card. While the Thistle support no doubt had a role in that, by contrast the Pars support were furious.

The heat certainly got turned up and when Crawford`s ball into the box came off Kinninburgh`s arm the intensity heightened. The home fans were raging and roared as Burchill broke into the right side of the box to tee up Crawford but the defence closed him down.

Archibald`s foul on Simmons allowed Glass to float in another free kick and to further enrage the home support, Simmons was being restrained as the ball cleared him to reach Tuffey. Murray put through Rowson on the hour but Gallacher was out well to force the shot wide left.

In 63 minutes the lead should really have been increased to two as a move fromÂ Burchill to Glass to Crawford set up Glass with an inviting header ten yards out but he directed that over the crossbar. Thistle began to get further up the park winning a corner in the 70th minute but that went straight to Paul Gallacher.

Next minute he was relieved to see Paul Keegan fire over the bar from close in after he had only half cleared another Jags cross. In 74 minutes Thistle grabbed the equaliser that you would not have thought possible. Keegan won the ball on the right side of the Pars box and cut it back for Steven McKEOWN to stick the ball away at the near post.

The Pars reacted with Burchill`s shot from an angle being deflected around the right post and claims for a penalty as Simmons was checked on the edge of the box, being waved away. Thistle continued to try and get the result against the ten men. Donnelly hit a great chance over the crossbar and there were a couple of Jags efforts that escaped narrowly wide of target.

Nick Phinn replaced Alex Burke with twelve minutes remaining and it was the sub who prodded the ball through in 83 minutes to give Stephen Simmons a fantastic chance to win the match. He was being closed down as Tuffey came out and the effort was palmed away.

There was some valiant play from Phinn and Morrison as the push for a winner continued. Tam McManus came on for Mark Burchill but the ten men were to be held to a draw despite the fact that Glass did almost find McManus with a long ball that the keeper came out to hold.

Two points dropped and yet again the Pars pay the penalty for missed chances.