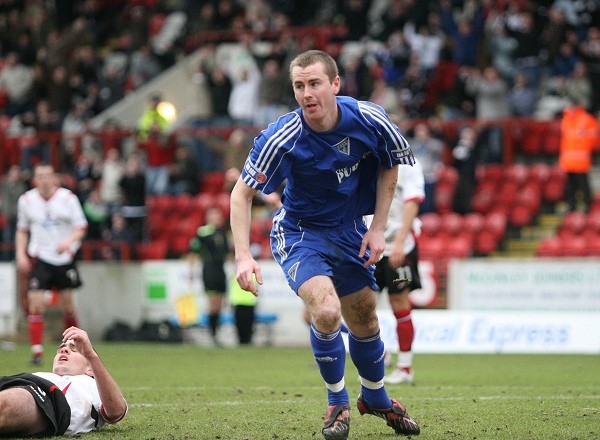 Dunfermline travelled to Cumbernauld for the First Division meeting with Clyde. Kevin Harper was missing following his red card against Partick Thistle and Nick Phinn came in for his first start since the end of October.

Clyde were missing Ruari MacLennan out with a virus and Gary Arbuckle with a broken jaw. New signing Dave McKay came in for the Bully Wee in place of Michael McGowan who dropped to the bench.

The home side kicked off towards the empty Optical Express Stand and into a fairly stiff wind. It was a third minute break from David McGowan that created the first danger. He intercepted an exchange between Phinn and Glass on the edge of his D and despite Glass`s efforts to retrieve the situation was able to float over a nice ball that sat up nicely in the wind for former Par Pat Clarke on the right side. Fortunately Scott Morrison cleared well.

In tenth minute Alex Burke provided the pass that gave Stevie Crawford a shot from the left was tipped over his crossbar by Hutton. Glass sent the ball over from the right and his weak delivery was directed straight back at him. This time he played in Phinn and it was he who fed Burchill another chance from the right side 18 yards out but again at Hutton.

Two minutes later Stephen SIMMONS nipped in front of Campbell to head an Alex Burke cross into the Clyde net from 12 yards. The keeper did not have much of a chance as the ball sailed passed him with no doubt the wind to blame.

Clyde responded with Clarke getting in on the right side of the box and again it was Morrison who came to the rescue booting the clearance behind for a corner that Gallacher was to punch clear.

Neither side really had a grip of the game as they struggled with both the heavy pitch and swirling wind but the home side were next to threaten. Dave McKay dispossessed Morrison to give Clyde a good opportunity but Billy Gibson failed to hit the target with his effort from 25 yards out.

In 27th minute with Phinn on the ball on the right, Referee Charlie Richmond halted play and showed his yellow card to both Stevie Crawford and another former Par, Craig McKeown. To the disquiet of the home support Dunfermline were awarded a free kick 30 yards out but Simmons low drive was well held by Hutton.

Clyde drove forward and a McKay cross that Clarke touched on, brought a fantastic save out of Gallacher diving to his left although the offside flag was up anyway. Next McKay burst away from Wilson but Scott Thomson came in with a good last man tackle and then Clarke headed another Campbell cross past the left post.

Dunfermline were then to strike just as their hosts had looked like coming back into things. Scott Morrison won possession after some poor Clyde slackness and popped a wicked low shot at Hutton from all of 30 yards. The keeper failed to capture the ball and Mark BURCHILL hasn`t had any easier tap-ins this season than the 36th minute spill he converted from five yards.

Nothing changed for the rest of the half. Dunfermline made good use of the wind and one had to hope that two goals of a lead at the turnaround was enough.

Clyde gaffer John Brown introduced Jimmy Gibson and Michael McGowan in the hope of trying to alter his side`s fortunes. Gibson hit an early low drive from distance that Gallacher did well to hold as he dropped to his left.

In 49th minute Bradley released Clarke up the left. His cut back as he made ground into the Pars box was blocked by Wilson but he then followed up to test Gallacher with a fine strike and then knocked the rebound off the keeper over the crossbar.

Michael McGowan tried a low shot that Gallacher could not take first time but he mopped up ahead of the Clyde strikers. There was a lengthy period where neither side could retain possession before one of the Clyde long balls caused some confusion in the Pars box. Billy Gibson pounced on a loose ball off Thomson but Gallacher was able to save.

As the match entered the final quarter Referee Charlie Richmond awarded Clyde a penalty afterÂ Wilson took down Michael McGowan on the left side of the penalty area. Pat CLARKE stepped up and drilled his spot kick low into the right side of the Pars net to make it 2-1.

Encouraged by the goal and their home fans, Clyde pressed for another. A McKay cross was turned on goal by Clarke at the far post but Gallacher blocked it out. Clarke had another shot deflected left for a corner and that was followed by another from the right. Phinn collected a yellow card for his tackle on Billy Gibson before Tam McManus came on for Crawford.

Clyde played their final card with Masterton replacing Campbell and it was the sub`s cross from a corner on the right that created further anxiety in the Fifers defence. Fortunately that failed to find a taker but as the game entered its final ten minutes, the Bully Wee continued to enjoy territorial advantage.

McManus took the heat off winning a rare Pars corner and after a stoppage when Billy Gibson suffered from cramp it was the Pars sub who nearly put the result without doubt. Tam powered in from the right and Hutton took the sting out of his shot only to see Burke follow up with a drive into the sidenetting.

Young Paul Willis came on for his first team debut but he had little time to impress. Burke sent Morrison through to release a 91st minute cross to Phinn but he headed over from six yards. When Charlie Richmond brought the match to an end it was a very welcome three points for Jim McIntyre and his team. The first away league win over Clyde in 14 years but then its only the second meeting since then!