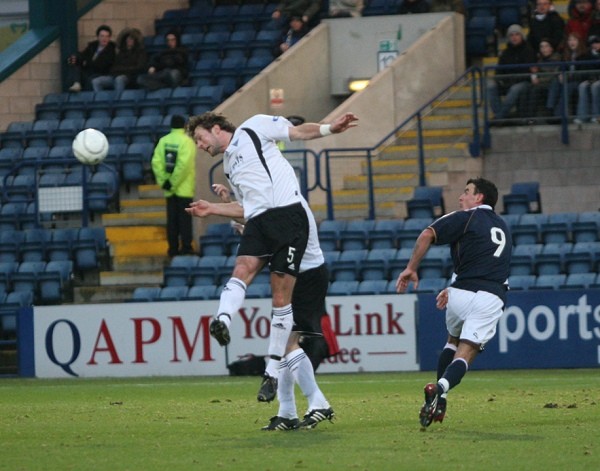 No Stephen Glass yet so it was an unchanged Pars team but Dundee made three changes with former Pars favourite Freddie Daquin playing against his old club for the first time. The other changes in the Dark Blues side from the one held to a draw at McDiarmid Park on Wednesday were Paul Dixon and Robert Davidson with Gary McKenzie, Jani Sturm and Paul McHale dropping out.

Mark Burchill and Jim Hamilton kicked the game off attacking the goal at the home end and Michael McGlinchey`s cross from the right was the first to create danger. The ball was cleared only as far as Stephen Simmons 25 yards outĀ and he was unlucky with just too much weight on his chip into the box.

Gavin Swankie`s cut back to Derek Lyle led to the Dee`s first shot at goal but he was well wide left. Then as play flowed back and forth Burchill rounded Milan Palenik but his well hit shot was straight at Craig Samson. Scott Morrison`s free kick also landed in the keeper`s safe hands before Dundee had a good chance of their own.

Scott Thomson seemed to have cleared the problem stealing the ball away from Lyle as he chested it down in front of goal but the return dropped to Scott Robertson who forced a good save from Paul Gallacher, turning the ball around his left hand post.

Mark Burchill ran on to a long through ball but Samson just got a touch on the ball as Burchill tried to go round him on the right. Burchy collected and crossed for Morrison but miraculously Samson got up to clutch the ball that looked destined for the net.

In 21st minute Danny Murphy cleared off the line after a Dundee corner from the right was headed back by Davidson for PalenikĀ who headed on target. Four minutes later Gallacher was called upon to save another good attempt from 20 yards this time from Dundee`s leading goalscorer, Kevin McDonald.

Morrison blasted over a 26th minute chance and next minute after Burchill had charged down a keeper`s clearance he crossed for Hamilton but his shot went straight into Samson`s arms. Quite a let off!

Burchill despatched another shot wide of the target in 34 minutes but it was at the other end that the scoring just about got underway. McDonald`s penetrating pass into the box looked good for Davidson but Jamie Harris produced a crucial tackle to yield just a corner. When Eddie Malone swung that over from the right the ball was headed on to the crossbar by Lyle and out to the left. Many of the home support were on their feet to welcome what they thought was going to be Dens Park`s first goal of 2008.

Poor Freddie Daquin was booed by the away fans but his deliveries from corner kicks were first class and causing plenty of problems for the Pars defence. On the half time whistle Lyle headed down a cross from the left but fortunately Gallacher gathered. It had been a half where both sides had very good opportunities to score and despite it being goalless there had been lots of shots and chances for both sets of fans to forget the bitter cold.

In 47th minute Jim Hamilton was gift wrapped a chance when a header back to the keeper on the left landed at his feet. He possibly had too much time to choose his spot and ended up shooting narrowly outside the left post from 14 yards out.

Gallacher made another first class save holding a good McDonald strike from 20 yards after Daquin had cut back a great ball from deep on the right. Dundee kept up the pressure with Davison being desperately unlucky to miss a diagonal ball from Lyle that would have put him through on the Pars keeper.

Lyle then forced another great save out of Gallacher that he held at the second attempt. It was end to end and Morrison made Samson save and Crawford failed to cut back the chance

Dunfermline`s first corner of the day came in 59 minutes but Scott Morrison`s delivery into the six yard box was penalised for some climbing in the area. Next Woods made headway down the right to cross for Simmons. He opted not to shoot but rather lay it off to Burchill who was closed out by the defence 20 yards out.

A Crawford cross was perfect for Woods to meet at the far post but his effort went straight at the keeper. At the midway stage of the half Danny Murphy did really well to clear a Paul Dixon cross. Scott Wilson then replaced Scott Thomson and the defence hardly had time to breath before a Lyle screamer was tipped over the bar by Gallacher.

Jim McIntyre made a double substitution with quarter of an hour to go, pulling off Jim Hamilton and Michael McGlinchey to make way for himself and Iain Williamson. Dunfermline got bogged down for a bit in their own half but Williamson didn`t get the decision after being brought down as he latched on to a Burchill through ball.

A quickly taken free kick deep down the left teed up Malone. He released a piledriver of a shot but Woods was out fast to block. In 85 minutes McIntyre chipped the ball into the Dundee box Burchill rose between two defenders to pass the ball through to Williamson but he headed across the six yard box and the defence cleared.

Great entertainment but only one point for Jim McIntyre`s team. The draw suits the Tayside team better since it keeps Dunfermline 14 points behind them.