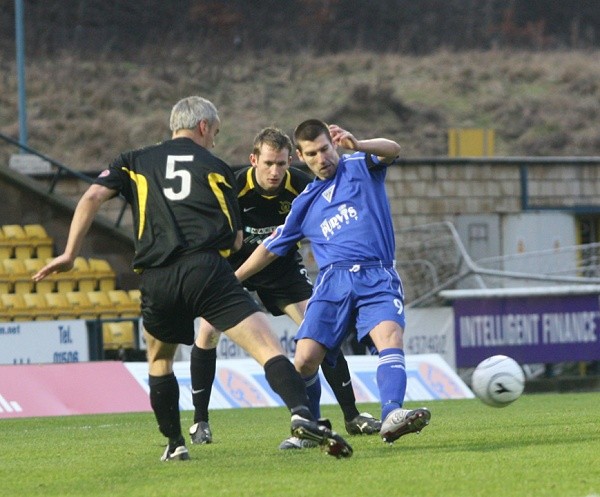 For the first match of 2008 there was one change from the Pars team that faced Stirling; Stevie Crawford coming in for the injured Stephen Glass. Welcome faces returning to the visitors` bench were Greg Ross and Club Captain Scott Wilson. Greg Ross` last involvement was in the Scottish Cup Semi Final Replay and it has been a long road back following surgery for the 20 year old. Scott Wilson has been out since limping off at Firhill on 15th December with a hamstring injury. Mark Tinkler and Robert Snodgrass replaced Jason Kennedy and Craig James in the Livvy line up.

It was Scott Thomson`s 250th start for Dunfermline but even in the absence of Wilson and his stand in Glass, it was Stevie Crawford who led the team on to the park.

The match kicked off after the crowd observed a one minute applause (and drumming) in memory of the late Phil O`Donnell, the Motherwell captain who died tragically on the pitch in Saturday`s SPL match against Dundee United. Dunfermline attacked the goal at the McArthur Glen end.

Livingston lofted the first potential danger into the Pars penalty box in four minutes from a free kick given for Steven Craig`s reverse into Thomson. Gallacher held that with ease and play was swiftly back at the other end where Scott Morrison`s pass to Jim Hamilton was headed down for Burchill to return to Hammy for a good shot at goal that Colin Stewart did well to turn around his right hand post for a corner.

In 10th minute the home defence were left looking at the linesman to raise his flag for offside. Mark Burchill was not offside however and he received Michael McGlinchey`s pass and ran through into the penalty box to cut the ball to his left and give Jim HAMILTON a simple tap in.

80 seconds later the roles were reversed with Hammy setting up BURCHILL on the left side of the Livvy penalty box where the Pars striker shot home his 12th goal of the season under the keeper from 12 yards. Disappointingly Burchill picked up a yellow card for his ear gesture to the home support.

Livingston`s nearest was a 17th minute free kick that Lee Makel was narrowly off target with from at least 40 yards. Then a quick break involving McGlinchey and Woods combining on the left was squared to Crawford and his ball in for Burchill on the edge of the box was well squeezed out by the home defence.

Corners continued to come the way of Dunfermline, Livvy held out but a nice move from Woods through Crawford to Morrison that took the ball right across the park let the former Aberdeen man cross another good ball into the box that just eluded Burchill.

The Livvy drum had been unusually quiet but was worthy of a few beats when Craig forced a save out of Gallacher and then Liam Fox`s shot that was blocked out. Graham Dorrans had another shot that went straight to the Pars keeper before yet another Morrison cross created danger in the Livvy six yard box but somehow Raliukonis scrambled the ball away ahead of Burchill.

In 32nd minute the West Lothian crowd were appealing for a penalty when Thomson`s legs got tangled with McMenamin`s and then when a drive broke off Stephen Simmons to Craig the headed effort might have been easier directed at goal but he succeeded in putting the ball wide left.

Having put a good 45 minutes Dunfermline deserved their two goal lead at the break. They took their chances well and really Livingston never tested Paul Gallacher enough to merit a reply.

Livvy got the second half underway and Fox drove an early shot on target from 25 yards out making Gallacher save. For the next 10 minutes Dunfermline got bogged down in their own half but lack of any inventive play meant the home side could take no advantage out of it.

A Hamilton shot from distance when Colin Stewart came rushing out only to tee him up a shot from 40 yards was the only positive move from the Pars who were punting to many meaningless balls up the flanks.

Robert Snodgrass` 61st minute corner from the right was fisted clear by Gallacher but the Livvy no.11 returned the ball deep into the Pars box. Thomson stopped Craig`s effort but a chance then broke for Dave Mackay whose strike from 14 yards was deflected wide left off Jamie Harris.

Scott Wilson was introduced for Michael McGlinchey and the Pars strung five across the back. Despite this two Pars corner kicks in quick succession after Hamilton`s connection on a Woods cross was turned behind, caused the travelling support to get behind their team.

In 72nd minute Burchill won a corner off McCaffrey on the right and Hamilton was desperately close with his header back across goal with the effort escaping around the right goalpost. Livvy kept trying and Gallacher had to be at his very best to pull off a great diving save to deny Dorrans from 25 yards.

Snodgrass pumped another free kick into the Pars penalty box and although Allan Walker connected first time his attempt was well blocked by the visiting defence. Livingston could not be faulted for their effort and came forward in waves but the men in blue were not proving easy to beat with the central defenders heading most of the prodding passes away.

The tackles got cruder by the minute with both the Livvy subs yellow carded for tackles; Jacobs on Murphy and then Pesir on Thomson. Manager Mark Proctor was also `spoken to` following his comments to the Assistant Referee. It was goals that mattered though and the only two were Dunfermline`s. Three points captured and returned to Fife. For Jimmy Mac, a sixth game in charge - two draws and then four wins.