SFL v Queen of the South 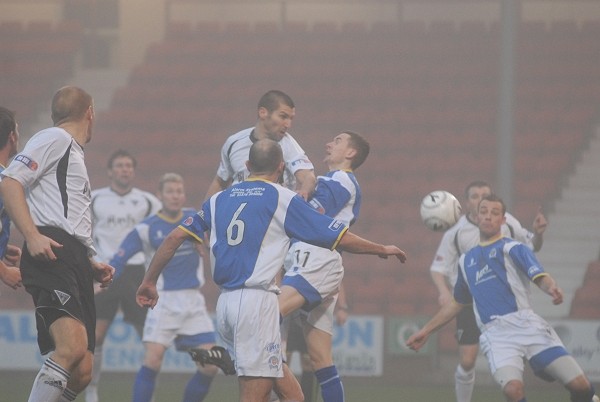 Kevin Harper was out with recurrence to his calf injury, Scott Wilson was suspended and illness kept out both Tam McManus and Stevie Crawford. Fortunately Calum Woods, Bobby Ryan and Jamie Harris were fit to take their places. Gordon Chisholm`s Queen of the South arrived on the back of an away win at Stirling and fielded one change - Jamie McQuilken taking the place of Robert Harris.

Fog poured into East End Park ahead of the kick off and it was clearly the Pars who were on the offensive first as they attacked the goal in front of the empty East Stand. Keeper Jamie McDonald fisted away captain Stephen Glass`s delivery in the second minute and then Andy Aitken hooked the next two minutes later. In between, a good exchange between Brian Gilmour and Stephen Dobbie had given Gilmour a shot on target but Paul Gallacher took it easily at his near post.

On seven minutes Jamie McDonald clattered his own central defender as he attempted to thwart Mark Burchill`s progress and a third Pars corner was sent in from the right. Unfortunately Michael McGlinchey belted the chance over the bar from 14 yards out.

Five minutes later Burchill ran on to a through ball but the close attentions of Jim Thomson and the advancing McDonald meant that his promising shot was forced inches wide of the right post. Stephen Simmons tried a similar ploy in 19th minute but the keeper was out quick to snaffle the ball up before Burchy could connect.

The home side continued to look the more likely to hit the net with Burchill switching play nicely out to McGlinchey who returned the ball from the left aimed for the head of Jim Hamilton but the defence crowded him out. Then a Calum Woods ball through the six yard box escaped McGlinchey`s efforts to head home.

Again in 27th minute Woods turned Brian Gilmour and delivered another inviting ball across the QOS box but Eric Paton headed that away. Pressure was forcing the visitors into mistakes and the defending was becoming ever so rustic yet there was no route to the net.

Dunfermline`s seventh corner of the game brought the long awaited goal. Stephen Glass`s cross was met by Simmons powerful header and McDonald appeared to play the ball on to his bar but BURCHILL was on hand to head home a predator`s goal from close in.

The half time lead was barely endangered but there was not much activity in front of the purple shirted QOS keeper either. One Woods cross that the defence cleared ahead of Burchill and a fine tackle on Sean O`Conner by Murphy kept the opposition away from Gallacher. Right on 45 minutes Paul Burns ran on to a Dobbie pass and cut the ball across the six yard line but there was no one there to convert. A timely reminder that the Pars needed to take all their chances.

Half Time: Dunfermline 1 Queen of the South 0

Illness meant Nick Phinn took the place of Simmons for the second 45 as the Pars kicked off attacking the McCathie Stand end. Within 15 seconds Burchill got to the right byelineÂ and cut the ball back for Hamilton but the defence intercepted and those late back to their seats missed nothing.

Five minutes later Glass got caught in possession on the left corner of his own box and Dobbie slipped in to shoot at the far post. Thankfully Gallacher`s outstretched save diverted the ball away and O`Connor couldn`t get close enough to take the chance.

It was 57th minute before a little magic from Phinn out at the right corner flag produced another Pars chance. The sub worked himself into a position to send over a cross that McGlinchey headed wide.

The Dumfries team made a double substitution just before the hour with former Pars hitman David Bingham and John O`Neill being introduced. The visitors` game was only temporarily raised and the Pars soon resumed their dominance. Unfortunately this was not translating into goals.

Hamilton hooked a shot that the on-loan Scotland Under 21 keeper held and then at the other end Gallacher showed his international class denying John O`Neill albeit with the help of the bar as he got a header on a McQuilken cross six yards out. McDonald failed to deal with a pass back in 68 minutes presenting Hamilton and Burchill with an opportunity but as they avoided the challenges from the Queens defence it was McGlinchey that struck but his aim was high and the chance had gone.

While Dunfermline were ahead on possession there wasÂ still discomfort amongst the support with the fragility of the lead. However in 78 minutes a great run by Burchill turned all that around. His pass from the left side back to Glass on the edge of the box was intelligently laid off to his right where PHINN made no mistake and the Pars were 2-0 ahead. The 19 year old`s first ever goal in his 13th appearance at senior level.

Mark Burchill was withdrawn in the next minute and went off to a standing ovation as Iain Williamson took his place. Jim McIntyre decided to give himself a run out for the final seven minutes but by this time the contest was over. At last a win for Dunfermline to celebrate and a Merry Christmas for all!