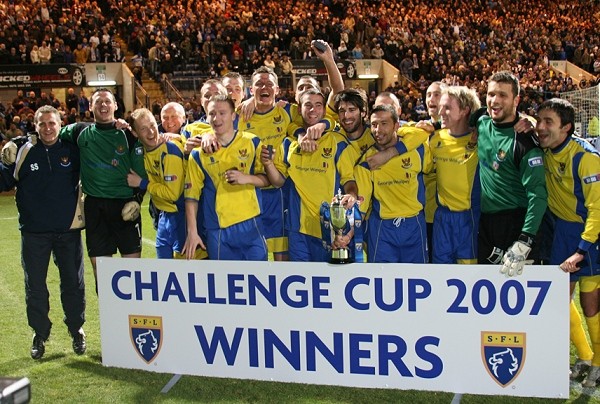 The Dens Park PA system belted out the music associated with both clubs making a good job of hyping up the Challenge Cup Final but the Perth fans outnumbered those from Dunfermline. Of course it was always going to be what happened on the park that mattered and after a shocking spell in which the Fifers leaked three goals in 18 first half minutes the travelling Pars supporters witnessed a real fighting spirit that has been all to rarely seen this season.

Sean Murdoch was benched as Paul Gallacher returned, Stevie Crawford and Michael McGlinchey were handed starts in place of the injured Tam McManus and Scott Muirhead. With Owen Coyle departed for a new job at Burnley, caretaker Sandy Stewart made only one change from the side that were held to a goalless draw when these two sides last met only two weeks ago.

The match started with Dunfermline taking optimismĀ from an early corner that Scott Wilson attacked. The Fifers looked to be up for this final but had the stuffing knocked out of them when failure to clear the ball away from their own box led to Stephen Simmons challenge on Steven Anderson giving Referee Eddie Smith the easiest of options in pointing to the penalty spot.

Paul SHEERIN stepped up and with his left foot sent the Saints into a 12th minute lead. The men in yellow piled on the pressure and might have notched a second when Kenny Deuchar rose in front of Sol Bamba to head narrowly outside the right goalpost. The lead was soon to be extended however.

In 18th Peter McDONALD accepted a pass in from the left to finish neatly with a chip into the top right corner of the Pars net. Two minutes later Gallacher beat away another good shot from McDonald. The offside flag and the swift sweeping role from Gallacher kept St Johnstone from getting more chances.

Dunfermline were up the other end with Crawford trying hard to alter things but it was the Saints fans at the other end who were on their feet to welcome the third goal of the afternoon. Kenny DEUCHAR received the ball eight yards out, turned Bamba and drilled home. Jubilation at the east end was in stark contrast to the sheer devastation felt by the Fife fans at the other.

From a Dunfermline corner Rocco Quinn was sent speeding up the right but Danny Murphy did enough to force him wide. Darren Young was brought on for Calum Woods in 35th minute and within a minute the Pars had a goal back. Stephen Glass`s free kick from the left was sent across the six yard box and Scott WILSON powered in a header to give the team new hope.

With a belter of a shot on the turn from 25 yards, Crawford forced a great save out of Alan Main. The keeper fisted away Glass`s corner in from the right but next Ryan burst into box right but the low shot from Simmons was held by Main. The Saints keeper again saved a fine strike from Ryan as Dunfermline really turned up the heat.

In the final minute of the half, Ryan provided another chance that allowed Young to drive a shot that the right goalpost denied Pars what might have been a very important boost before the break.

It was the Perth side that took the kick off for the second half and they drove forward creating early problems. There was a real fright for the Pars when Quinn hit the left upright after just 90 seconds, the ball rolled along the line and bounced out.

Darren Young found an opening for another shot at Main in 58 minutes after Mark Burchill had fed the ball back to him through Glass. Jim Hamilton came on for McGlinchey and Ryan had another crack at goal only to have his well struck low effort beaten away.

Deuchar pulled a shot wide of the Pars left post but it was the Pars who came close with Crawford prodding the ball toward the six yard box where Burchill looked to be in until Main`s reaction forced the ball wide for a corner. Then an Anderson foul on Jim Hamilton on the edge of the box was awarded by the referee but when he looked over to his assistant, Morag Pirie, officiating in her first major cup final, she indicated the misdemeanour was inside the box and the final had its second penalty.

Stephen GLASS took the responsibility and sent the ball into the right side of the goal with Main given no chance. It was game on then with a quarter of the match still to go and Dunfermline certainly made their Perth opponents fight to the very end to earn the silverware.

Stanic turned the ball on to his own crossbar as the Pars forced corner after corner. Glass got around theĀ defence on the left side but Burchill could not beat Main from close in.

It was all Dunfermline and the ball was constantly fed into the Saints box but there was no way through. Every effort in the last push was blotted out. Hamilton`s flick on to Burchill, Glass`s corner was punched off the head of Bamba by Main, Young headed into Main`s hands and Burchill was blown up for a debatable offside decision.

Three added minutes came and went before the referee ended what was a cracking cup final. The Pars performance when they went 3-5-2Ā following Ā the introduction in 35 minutes of Darren Young, was possibly their best of the season but you cannot give a team like St Johnstone three of a start and expect to win.

Scott Wilson did not enjoy leading the team up to receive their losers medals but it had been a cracking cup final and if Dunfermline can be the side they were in the final 55 minutes of this match, Ā then the season holds some hopes of a revival.