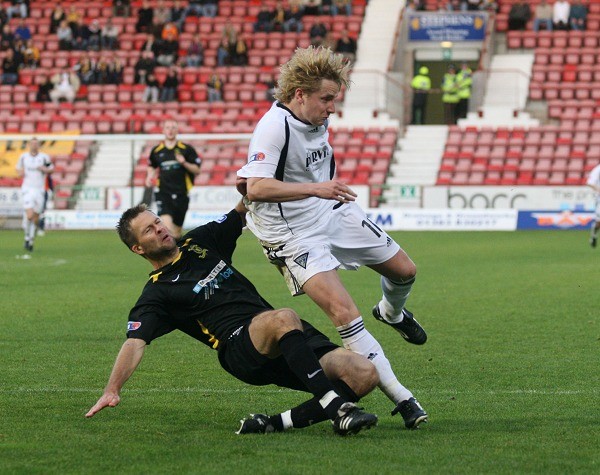 The heaviest ever league defeat at the hands of Livingston FC brought greater depression at East End Park and a new focus on the battle to avoid things getting even worse. Just when we thought things were very bad, the team dropped two more league places.

Mark Proctor brought in David Mackay, Robert Snodgrass and Julius Raliukonis who joined the West Lothian side on Friday on loan from Vetra Vilnius, with Liam Fox, Scott Mitchell and Craig James all placed on the bench.


Scott Wilson led the team out and raised much needed encouragement from the home stands. A huddle followed before DA got the match under way. Tam McManus and Mark Burchill took the kick off turning the ball back to Calum Woods who pumped a pass down the right for Bobby Ryan to win a corner with just 17 seconds gone. Liberda came out to grab Stephen Glass`s cross from the right but Livi continued to be under pressure in the opening minutes.

The visitors first serious attack came from Dave Mackay whose driving run from halfway in 7th minute was not halted and he set up a one two on the edge of the box. When the ball broke to Tomas Pesir his shot was blocked out leaving Sean Murdoch the sole task of stopping the ball going behind for a corner.


Livi continued to bother the Pars and passed off a great chance to take the lead four minutes later. Robert Snodgrass rounded Woods deep down the left and his lay off for Steven Craig really should have hit the target from twelve yards but he sent it wide left. Next Murdoch held a Snodgrass free kick but uncomfortably the opposition were taking the game to the Fifers.

Burchill beat off Mark Tinkler`s challenge on the right side of the box but Liberda was out quick to sweep away the loose ball. Scotland U20 internationalist Graham Dorrans then fired a long range effort at the Pars goal but he was well wide to the right.

In 18 minutes a burst from Scott Muirhead created a shooting opportunity for McManus that landed in the stand and then a McManus cross from the right was met by Burchill with a glancing header but the ball skimmed wide left.


At the other end Dorrans picked out Craig on the edge of the area and he despatched a good chance well wide right. Dunfermline were forced to make an early substitution mid way through the first half, Calum Woods going off to be replaced by Stephen Simmons. The former Hearts player had been out for a month after sustaining injury in the Challenge Cup Semi Final against Ayr United.

Burchill sent a McManus through ball past Liberda in 25 minutes but the offside flag was up and the game remained goalless. next minute Burchill picked out his striking partner on the edge of the box and Tam turned Raliukonis before driving the ball low but left of goal.


On the half hour Bamba lost out to Steven Craig on the left side of his own box but then redeemed the situation with a telling tackle that removed the danger. Craig then contrived to miss two golden opportunities. The first from 15 yards he hit weakly at Murdoch, the second from slightly further on he lofted into the McCathie Stand.

Five minutes from the break the home side enjoyed a fair amount of possession around the Livingston box culminating in a chance for Muirhead but his attempt failed to bother the all red keeper as it flew into the stand. Lee Makel retrieved a defended corner to pop a shot but he was off target as was Scott Muirhead as play switched quickly to the other end.

Dunfermline had been living dangerously and Livi had been failing to take their chances but just before the interval a goal came. In 44th minute Des McCaffery`s tenacity on the left eventually allowed Pesir to lob the ball towards the far post and this time Steven CRAIG headed downwards and into the Pars net.


Livingston were out waiting on the Pars and from the restart they were on the attack, driving the ball through the Pars box in the opening minute. Dunfermline looked as though they might fight their way back into the match but those hopes took a powerful dent when a comedy routine at the back gifted Steven CRAIG a second goal with just five minutes of the second half gone.

Bamba and Simmons went for the same ball on the edge of the Pars box as Sol stumbled over his team mate and they both went sprawling to let the Livi no.9 in to send the ball beyond the advancing Murdoch and into the far corner of the net.

A timely interception by Murphy denied Craig another in 64 minutes but still the team in black were seeing far too much of the play. A Snodgrass free kick was headed behind by Bamba and when Snodgrass sent that over the ball was returned to him and his next attempt dropped for Mark TINKLER to drive low into the Pars goal from 18 yards.

A quarter of the game remained but at 3-0 down the task was too great. Scott McBride came on for Scott Muirhead and Burchill did send a result of the head tennis from Wilson and Bamba on to the crossbar. The couple of hundred travelling supporters were the only ones in the steadily emptying stadium who were enjoying this.

In 74 minutes McManus`s shot from the right was deflected behind for a corner and two minutes later McBride won another but Livingston defended well. Try as they might Stephen Kenny`s team could find no way around the Livingston defences. Individually the Pars players efforts could barely be faulted but unfortunately their collective efforts just were not nearly good enough.

In the first minute of added time on loan Jason KENNEDY rubbed salt in the Fifers wounds hammering in a lay off from a Snodgrass`s free kick, off the crossbar from 20 yards out to make it 4-0.


Another defeat, twelve goals conceded in the last three league games with no reply. Livingston`s first away win of the season took them above the Pars. Queen of the South`s victory over top of the table Hamilton moves them up to seventh but with Stirling only drawing and Clyde losing Dunfermline only drop two places to 8th.