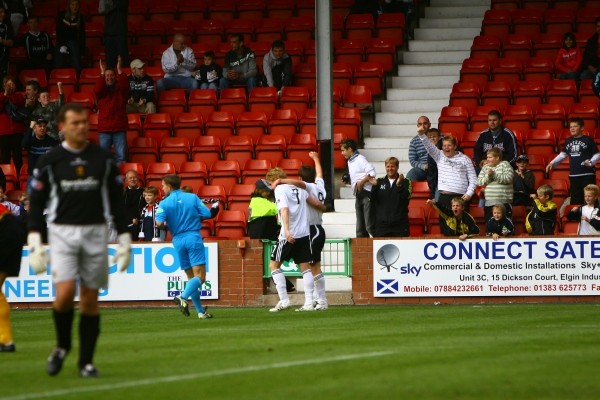 Sammy the Tammy`s pre match routine was to the Average White Band number "Pick up the Pieces" since that was just what Stephen Kenny`s side were hoping to do after the "unacceptable" performance the previous Saturday that saw them outplayed and well beaten by Colin Hendry`s Clyde.

The Manager made three changes from the team that lost at Broadwood; out went Aaron Labonte, Owen Morrison and Bobby Ryan to make way for Scott Wilson, Tam McManus and Nick Phinn. A welcome sight on the Pars bench was Jim McIntyre, first outing of the season for him. Partick showed two differences from the side that defeated Queen of the South last Saturday; Marc Twaddle and Kevin McKinlay replacing Gary Harkins and Stevie Murray.

No Pars huddle but Stevie Crawford won the toss and Thistle kicked off attacking the McCathie Stand end and it was there that the first chance whistled wide of the far post after just 70 seconds. David Rowson played the ball wide right from a central position and Scott Chaplain was clean in to shoot from the edge of the box at an angle.

The match was fairly even in the opening six or seven minutes with both sides misplacing passes or losing possession. Indeed it was an interception of Chaplain`s pass on midway that led to the Pars opening goal in 9th minute. Mark BURCHILL sprinted away with the ball and despite the efforts of the trailling John Robertson Burchy tucked the ball home from 15 yards with a left footed shot that gave the advancing Hinchcliffe little chance.

Three minutes later Stephen Glass powered a 35 yards free kick narrowly wide right from a free kick that earned Archibald a yellow card for upending the Pars captain. There was nothing else to bother either keeper until Hinchcliffe had to hold a deflected Tam McManus shot after Burchill had made a good break but was forced to play wide to his team mate by the persistence of Marc Twaddle.

Partick fired a snapped shot high into the stand and forced a corner that was easy meat for Sol Bamba. The sun broke through the grey sky but the Fifers continued to find it hard to penetrate Thistle. The visitors had a headed Roberts effort that Gallacher had to hold in 27 minutes and then a minute later Chaplain fed Liam Buchanan a chance that he drilled at an angle into the right sidenetting.

Jim Hamilton created a shooting opportunity for himself but the better chance came from the blocked re-bound that Glass fired on target from 20 yards forcing Hinchcliffe to turn the ball around his right hand post for a corner.

An even better chance came to Hammy in 34th minute and he really should have done better with the McManus cut back from deep inside the Jags box. A corner was all that was gained and when Burchill sent that over from the right Hinchcliffe fisted clear just as the ball was about to reach Bamba.

Thistle were not beaten yet and Twaddle`s cross from the left served notice with Chaplain coming perilously close to turning the ball into the net instead of past the post from eight yards.When in possession the Pars were demonstrating greater control and you could sense that maybe it was just a matter of time.

Crawford switched a great ball left for the sprinting Glass but his cross into the box was cut out and then Simmons had a well hit shot deflected for a corner. Burchill was caught offside after Crawford and Phinn had combined to carve out a chance from the left.

For the restart Scott Thomson replaced Darren Young and Iain Williamson came on upfront in place of Mark Burchill who was sufferingÂ with flu like symptoms.Â Thistle too made a substitution Stevie Murray for Kevin McKinlay.

First shot on target came from McManus after Phinn had made a driving run from half way and then in 52 minutes Crawford broke from the edge of the centre circle to prod a shot outside the right post from 20 yards. Emphasis was on attack and Simmons won a corner on the right but this time McManus was the taker but he couldn`t pick out the target men.

The introduction of Paul Keegan for Thistle injected some much needed urgency into their game and a 58th minute Buchanan shot was deflected from 15 yards out, over this own crossbar by Hamilton. A 66th minute free kick from Murray was headed behind by Bamba but Thistle could do nothing with the corner.

East End Park raised the volume as Phinn picked out Glass in space on the left and his cross was headed back by Hamilton in the direction of Williamson but Thistle intercepted to counter attack. Murray swung the ball in from the left clearing Wilson`s leap to give Keegan a shot at goal that Bamba kicked away.

As the game entered its final fifteen minutes Dunfermline stroked the ball about the Thistle half in search of an opening. Hamilton eventually headed down the ball on 18 yards but Thomson, well away from his right back role, just failed to take the ball with him and the chance had gone.

There was an anxious moment in the Pars goalmouth as Gallacher went for a ball but missed leaving Roberts the chance to flick it back into the six yard box but the defenders won. Murray delivered another Jags corner from the right and again Keegan was able to direct the ball at goal but was wide left. Sub Gary Harkins belted a shot over the crossbar before the introduction of Jim McIntyre lifted the home support again.

Macca had barely been on a minute when Crawford`s pass to Phinn was played into him on the right side of the Partick box. Unfortunately though the turn was class the finish was not enough to test the keeper. Simmons got away with a defensive block that played the ball into Buchanan`s path and then as play switched back to the other end Crawford just missed out on a Williamson cross after Phinn`s pass had sprung the opposition`s defences.

This was a game that Dunfermline deservedly won but it was not without its nervy ending with Bamba, Thomson and Hamilton heading clear in added time.