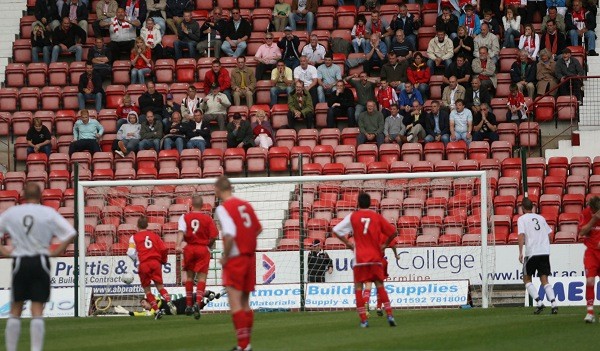 Dunfermline were without the suspended Souleymane Bamba but Stephen Glass returned after his one match suspension. Paul Gallacher made his Dunfermline debut and Scott Thomson and Jim Hamliton returned in a side that showed four changes from the one that started at Almondvale last Sunday.

The Pars kicked off playing into the wind and attacking the goal at the Cowdenbeath end. Owen Morrison was caught offside as Hamilton played a quickly taken free kick out to the left wing and Stirling`s first ball into the Pars box came after five minutes but Gallacher was able to cling on to the crossbar as Paul Nugent`s cross sailed across and behind.

Chris Aitken tried a shot from distance as the visitors kept the Pars at bay. In 9th minute Hamilton got two chances to fire a shot in from the edge of the Albion box and there were cries for a penalty as Paul Murphy was hit by Hammy`s shot. Morrison also had his well struck shot from 16 yards blocked when he connected well on the end of a Harper pass.

A couple of Pars corners still fail to create much danger to Hogarth between the Stirling sticks, the greatest danger coming from a Paul Gallacher kick, headed down by Hamilton to Harper that Nugent had to despatch behind his own goal on the quarter hour. Dunfermline were beginning to enjoy much possession, a good penetrating run by Harper played Stevie Crawford in on the right side but Hogarth slid in to save before the Pars no.8 could connect.

The best chance of the match thus far came in 28 minutes and it was the visitors who failed to take it. Stirling captain Chris Aitken held off the challenge of Glass as he gained ground down the left wing before centring for David McKenna but with only the keeper to beat, his shot from 15 yards was lifted high into the stand.

A loose ball from Glass to Thomson let in Steven Bell but his angled shot was easily held by the black shirted Gallacher. At the other end Crawford did well to create an opening for a cross from the left but Hamilton was offside as he attempted to direct the ball home from six yards.

There was another let off for the Pars with ten minutes to the break. Scott Wilson was dispossessed by McKenna on the left edge of his six yard box and Derek Lilley managed to put the ball wide at the near post when it might have been easier to score.

Young and Crawford forced their way into the Stirling penalty box but a shot could not be taken and when Owen Morrison got the break of the ball he too was closed down. Glass presented Crawford with a good chance in 42 minutes but Hogarth blocked and then from the resultant corner Hamilton almost beat the keeper but Stirling survived.

Dunfermline had looked the better team for most of the half although Stirling Albion had probably had the better chances. Goalless at the interval.

Silky play from Glass and his midfield colleagues encouraged the home support in the opening minute of the second half. A series of short, slick interchanges sent Crawford down the left and he cut back for Owen Morrison to fire a dangerous ball across the face of goal. Shields sent over a cross from the right that Hamilton headed over the bar and then Hammy was on the end of a Harper cross that he directed wide and Crawford following up was offside.

Pressure was sustained on the Albion goal and two corners kept the decibels raised. Darren Young headed wide but the visitors certainly had their backs to the wall. Young was brought down by Graham and the Pars were awarded a free kick in a central position 30 yards out. The setpiece was quickly taken choosing Crawford as the option on the left. Stevie took the ball well up before checking back on to his right foot for a cross that Jim HAMILTON headed home at the far post to break the deadlock with just over ten minutes of the second 45 gone.

In 64 minutes a fine run from Owen Morrison produced a good right footed strike from 25 yards that Hogarth held and in the next minute a piece of genius from Crawford should have handed Young the second goal. Running into the left side of the Stirling box Stevie flicked a Morrison back beautifully to Darren but he unfortunately pulled his shot wide right.


Still the Pars took the match to the Binos but like before getting in that final killer shot remained difficult. Owen Morrison chose to curl a free kick on the edge of the box at the left goalpost but Hogarth just got across in time. It was looking like only a matter of time before the Pars would add to their tally but in 73rd minute Scott Morrison tugged atÂ Steven BellÂ as he rose for the ball on six yards and he was shown red by referee Stephen Finnie.

From the penalty spot Chris AITKEN sent the ball to Gallacher`s right and it was back to 1-1 and the Pars for the fourth successive league match were down to ten men. When Nugent took out Owen Morrison on the left side of the box Harper swung over a useful ball from the free kick that Crawford crashed against the far post at an acute angle from six yards.

Time was running down as Stirling collected five cautions in the space of nine minutes. Shields was next to send give Hammy a headed chance but he was wide. Gallacher was kept alert diverting a Tomana shot wide of his left post. A Harper free kick flashed through the box but then in 88th minute East End Park erupted.

Darren Young sped into the left side of the opposition penalty box. His shot was beaten down but he managed to flight a cross neatly across the six yard box for Kevin HARPER to net in style with a diving header. Only two minutes remained and with Phil McGuire sent on in place of Owen Morrison the ten men held out for a well deserved victory.