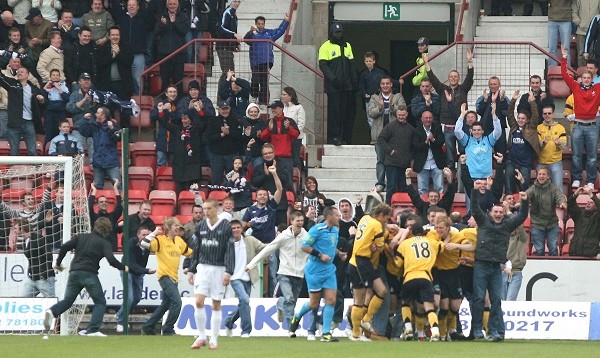 Dunfermline started with eight players with squad numbers between 1 and 11 and it was Burchill and Crawford who got the final (hopefully just for 14 months), SPL match, at East End Park underway attacking the goal in front of a fairly well populated East Stand.

Falkirk had the first chance of the match when in the fourth minute Alan Gow`s cross from the left found Russell Latapy on the right side of the Pars penalty box. The Trinidad and Tobago internationalist controlled but shot a weak shot at Roddy McKenzie. Crawford fed through a great ball in 12th minute that his striking partner raced on to but Darren Barr made a really good tackle on the 18 yard line to rob Burchill of the chance. Three minutes later McCunnie played in a dangerous ball for Burchill but he chose to lay off to Daquin and it was Simmons who took the responsibility for a shot but Falkirk blocked that 16 yards out.

A 17th minute free kick 30 yards out given for Steven Thomson`s foul on Darren Young would have been perfect in rugby as Scott Muirhead lifted the ball over the posts and into the Falkirk crowd. Then Falkirk missed a great chance when Gow pushed the ball through for Carl Finnigan to get in to shoot on target. McKenzie was out quickly to smother the attempt and then Finnigan failed with the rebound.

Falkirk kept up the pressure with 1-2 with Latapy letting in Gow on the left side of the box and this time Souleymane Bamba made the telling tackle. The green shirted, Kasper Schmeichel`s first `save` came in 29th minute when a Jack Ross header back required the on loan keeper to do some work. With the strong wind spoiling the football there wasn`t much to cheer either fans but the visitors amused themselves with taunts of `going down` and sarcastic chants about the Dunfermline management. Two Daquin crosses in from the right quietened the visitors but their team survived a penalty appeal when Burchill was spilled and then another that failed to get get any takers.

Greg Shields collected a yellow as he stopped Thomson`s progress but Latapy made a miserable job of the Falkirk free kick on the edge of the D. McKenzie gathered the weak low shot as it found a hole in the defensive wall.

Not a great first half. Surely with cup places at stake the second half had to be better. Jim Hamilton and Calum Woods came of the bench for the second half and Freddie Daquin and Scott Muirhead were withdrawn. The match definitely needed a goal but it came at the wrong end just under three minutes into the second half. The Dunfermline defence failed to clear the ball in a melee on the right side of their six yard box. McKenzie made a good attempt to spread himself and blocked the route to goal but the ball broke back to Steven THOMSON who drilled the ball through the legs of defenders to find the far side of the Pars net. The visiting supporters spilled out of their stand with several dancing around their heroes in celebration in the penalty box.

As the weather turn to foul with driving rain, Latapy made room on the left side and chipped the ball on to the roof of the net. Another Falkirk goal was not far away and they doubled their lead in 56th minute. Thomson`s pass in from the right found Alan Gow and he played a 1-2 with Latapy that took him into the Pars penalty box on the right. Alan GOW`s shot at an angle from 15 yards went under McKenzie and into the net. This time the Falkirk fans were kept in their stand by a row of Fife Constabulary but they invented a celebration with a conga through the lower half of the stand.

The home support were extremely quiet but a 66th minute did lift their hopes. Jim Hamilton turned the ball to Burchill and he neatly laid the ball off to Crawford but Schmeichel and Milne squeezed him out. Greg Shields hit wide with a powerful drive from 35 yards.

The sun peeped out again but still the Pars failed to reciprocate. McManus swung over a ball that was too strong for Crawford. Darren Young had a pop at goal from the right but the shot from the edge of the box sailed high and wide left. A 78th minute shot from McManus came came off the crossbar and then the Falkirk keeper held a powerful Crawford drive.

Pedro MOUTINHO polished off a bad season for the Pars hitting home a 90th minute goal from 22 yards.� As the weather again turned wild and wet the sound of the final whistle was no great disappointment.

The Falkirk fans left in high spirits celebrating their first maximum points against the Pars since season 1980-81 and it was the first season that Dunfermline failed to score a goal against the Bairns since 1987-88.