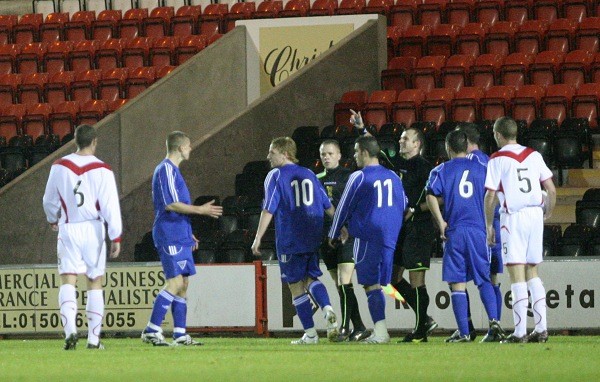 For the Challenge Cup Quarter Final the Pars began with only six of the team that started at Dundee last Saturday. Sean Murdoch back in goals and starts for Scott Muirhead and Iain Williamson. Tam McManus and Stephen Simmons came in as Paul Gallacher, Sol Bamba, Darren Young, Stevie Crawford and Jim Hamilton took a rest.

Airdrie kicked off and immediately had the Pars under pressure. Yet another new pairing in central defence with Woods and Labonte, and it was tested within the first minute with Allan Russell and Ricky Waddell failing to take an easy chance.

Dunfermline`s best effort in the early exchanges was a 35 yards lob from Tam McManus in the fourth minute but his enterprising attempt landed on the wrong side of the roof of the net. Disappointingly for Scott Muirhead, he was caught in a tackle and had to be subbed by Darren Young after just six and a half minutes.

The game was not igniting in any way and only an off target shot by Simmons and a low drive at Robertson from McManus were worthy of any further note before the 20 minute mark.

Sean Murdoch was made to hold a header from Bryan Prunty and then in 25th minute a Ricky Waddell cross was headed back by Prunty for Allan Russell to drive low on target but again Murdoch dealt with that with relative ease.

There was a let off for Airdrie in 27th minute when Murdoch`s long through ball was chased by Kevin McDonald and Mark Burchill. As the ball bounced Burchy nipped in behind the defender who then contrived to play the ball back to his keeper from the edge of his penalty box. The ball broke off Burchill and the Lanarkshire men got away with the slackness.

The rain got heavier but at least the visitors forced two corners, the second after Glass`s cross from level with the six yard box created panic in the Airdrie defence and Stephen McKeown hammered the ball into the empty stand behind. Airdrie spurned a good chance as he connected with a cross field ball but fortunately Glass was there to block.

The second half started with shots at both ends going narrowly wide of the left goalposts. Darren Young popped a shot after 40 seconds and then another 40 later Simmons was robbed and Waddell let go from 25 yards.

The opening and much needed goal duly arrived 54th minute when a swift break sent McManus deep into the left side of the Airdrie box and his cross was neatly finished by Mark BURCHILL tucking the ball into the bottom right from eight yards. Three minutes later Tam tried one on his own and the shot just curled outside the left post.

There was great effort to get the McManus name and the striker created space in 62 minutes to fire a good shot from 25 yards out that Robertson held. There was then another let off for the Diamonds when McManus was put through one on one with the keeper but he took it too far wide and his shot was out before it hit the defender at the near post.

Airdrie were not for giving up and their fans roared them on after Murdoch could only parried a 69th minute rocket of a shot from Russell and then see the subsequent chance from Graeme Holmes taken by the keeper dropping to his right. Murdoch remained the busier of the keepers until Simmons sweeping pass to McManus on the right of goal was well held by the beige shirted stopper in 78 minutes.

BURCHILL was to increase the lead two minutes later however heading in a Glass corner from the right as Robertson remained rooted to his line.

With seven minutes remaining John McCulloch subbed for Iain Williamson, so make his first team debut and his defensive qualities were to be tested in the closing minutes after Calum Woods was red carded when he and Stephen McKeown squared up to each other forehead to forehead. Darren Young was yellow carded as he pushed away the Airdrie player who was also shown red.