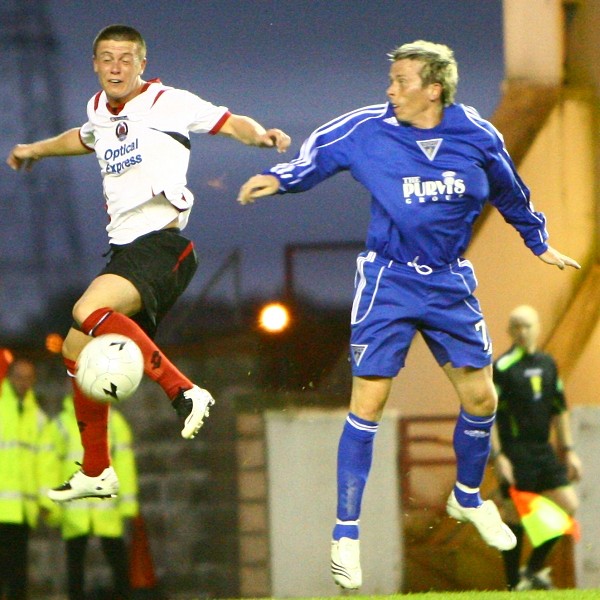 Six changes from Sunday for the Challenge Cup tie at Broadwood. Sean Murdoch got another start in goals, Mark Burchill, Stephen Simmons, Tam McManus and Bobby Ryan returned to the starting line and with Sol Bamba away on international duty Aaron Labonte came in. Clyde were unchanged from the side that faced Dundee on Saturday.

Dunfermline kicked off playing north to south in a sparsely populated stadium but within 20 seconds a weak pass back by Labonte played Murdoch into trouble and he had to be out quickly to clear the ball into the West stand. The visitors first showing came in fourth minute with Tam McManus working well to get in a good position on the edge of the Clyde area.Ā Ā He laid the ball back to Bobby Ryan but the Irishman blasted the ball over the crossbar.

Next McManus supplied Burchill at the edge of the six yard box but his flick was not to beat keeper David Hutton. The purple shirted stopper took that easily but then McManus was wide left to cross and again Burchill couldn`t produce anything to trouble Hutton.

In the eighth minute two corners were fired into the six yard box by Bobby Ryan and despite the efforts of the Pars strikers nothing resulted to bother the defence.

The chances then all came the way of Clyde. Dougie Imrie broke through the centre of the defence and drove a 12th minute shot at goal from 16 yards that Sean Murdoch did really well to stop with his legs. Next minute a Ryan back pass landed in the path of Imrie and yet again Murdoch had to show his worth.

The Pars looked vulnerable at a Clyde corner when Higgins shot from close in to be blocked by Stephen Glass just off his goal line. Joe Cardle smacked the ball against the left goalpost before the Fifers could respond.

Dunfermline`s fourth corner was won in 20th minute but that delivery was headed over the bar by Stephen Simmons. Five minutes later Neil McGregor lofted down the middle but David McGowan couldn`t beat Murdoch and that was a let off. For all their pressure the Bully Wee were punished on the counterattack.

Tam McManus`s swift break down the right and fine cross placed a dangerous ball into the six yard box where Mark BURCHILL turned it into the net. The 26th minute goal gave Dunfermline a much needed confidence boost and play continued towards the Clyde goal. Simmons headed over the bar and then Ryan, having got deep inside the right side of the box, tried to find Burchill when Crawford was better placed for a cut back.

A long ball from Wilson saw Burchill racing into the Clyde box and when he went down in the challenge from Higgins there was to be no penalty.

McGregor had a great chance to snatch an equaliser in the 44th minute. The ball appeared to surprise him as it rolled down his chest but he failed to really connect for what would have been a certainty. Dunfermline retained their advantage at the interval but Stephen Kenny would have some strong words for his side when they took the breather.

Clyde were worth a goal in the first half and grabbed their just desserts with the first attack of the second half. Michael McGowan worked hard to keep the ball in play and Masterton hammered a low ball on target from 20 yards that Murdoch parried but the loose ball was collected by Ruari MacLENNAN to stick away with less than 40 seconds on the stopwatch.

The Pars came close to an immediate reply but when Burchill slid in at a free kick to Scott Wilson`s head the ball slipped beyond the far post. The most eager team remained Clyde although after a run from Morrison, a 54th minute shot from McManus was deflected into the sidenetting by Hutton. Tam protested when the corner was not given but Owen Morrison forced a goalĀ to restore the lead just three minutes later.

The Irishman worked his route down the left wing, fooling every challenger as unusually he took it to their right in each tackle before releasing a shot from an acute angle. The shot took a deflection off a Clyde player, McGREGOR for an own goal.

In 65th minute Willie Collum gave a very strange decision after Dougie Imrie crashed a ball from the left angle of his own six yard box that his own keeper David Hutton did really well to hold. The save was very necessary but the referee gave an indirect free kick on the edge of the six yard box to the amazement of all 799 in the ground. Scoring at these situations are rare and when Morrison poked the ball to Burchill his effort was blocked out.

Five minutes later Masterton hit a 30 yard free kick at Simmons in the Pars box but in 74th minute Mark BURCHILL fired home his second and the Pars third of the night. Bobby Ryan was the provider cutting back a good ball from the right that the striker, with much style, swept into the top right corner of the net.

Six minutes from the end Murdoch denied Higgins from 25 yards.Ā The home side pressed with two corners from the left and from the second substitute Kevin Bradley`s glancing headerĀ hit the far post. Murdoch turned around in relief to gather the ball off his post. Clyde produced a spirited final push but to no avail.

In fact it was the Pars who altered the scoreline taking advantage of gaps at the back for McManus to get down the right to find Burchill at the far side of the box. Instead of shooting for his hattrick he set it up for Owen MORRISON to net.

Dunfermline went through to the next round with a degree of comfort but had last year`s beaten finalists taken their first half chances it could have been a lot closer.