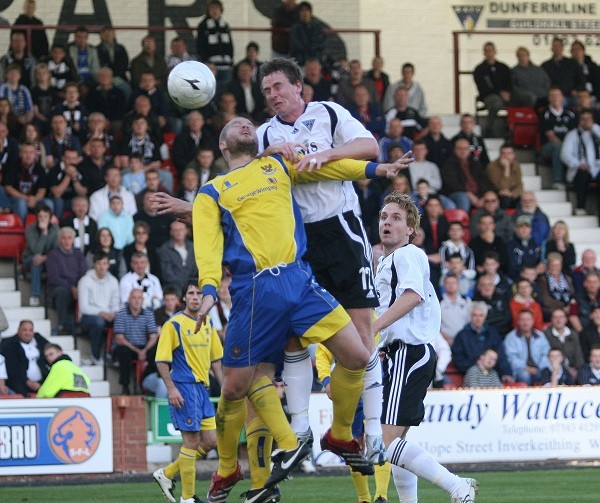 After the disappointment of Gothenburg everyone hoped that the Pars would be able to put that behind them and concentrate on keeping on track their attempts to get back into the SPL at the first time of asking. With Greg Shields and Scott Morrison incurring injuries in the Ullevi, the injury list continues to grow and selection that bit tighter. Morrison was suspended for Sunday`s match anyway but Shields hamstring injury probably puts him out for a number of weeks.

For the visit of St Johnstone the only changes from Thursday night was Scott Thomson and Calum Woods for the injured duo. For the visitors Kenny Deuchar, on loan from Gretna, started upfront but without Goran Stanic out with a groin strain. The Saints kicked off after a minute`s silence as the East End Park crowd paid their respects to Willie Cunningham who died on Thursday.

From the start it was all Dunfermline with Kevin Harper the first to excite the crowd and then Thomson getting deep inside the opposition box before cutting back for Stevie Crawford. The striker`s shot from 15 yards was blocked but in 9th minute he supplied Owen Morrison with an equally good chance but with the keeper beaten Steve Anderson cleared off the line.

Four minutes later a promising break from St Johnstone saw Deuchar swiftly switch the ball right for Quinn and fortunately he melted his effort from 18 yards wide right. Owen Morrison sent a 30 yard free kick wide of the left post and then when Paul Sheerin got an opportunity from a free at the other end his ball into the six yard box only saw his forwards penalised for pushing.

A 19th minute corner flighted in from the right by Sheerin found the head of Anderson and Scott Wilson dived in to divert the net bound header over his crossbar. Next Harper played in a cross that was nicked off Crawford as he turned to shoot and then Owen Coyle`s men cleared a neat ball in from the left by Thomson. Dunfermline continued to pressurise and Harper`s next cross forced another corner on the left but still nothing tested Alan Main in the St Johnstone goal.

It was the 31st minute before it looked like Dunfermline had scored. Harper received a through ball that he carried past two defenders and into the D at the top of the box before shooting inches wide of the left goalpost. The Pars were then denied a penalty when Darren Young was tripped in the box as he was winding up for a shot.

Two more chances came the way of Hamilton. The first a cut back from Crawford to Harper was centred but the big striker sent the ball over the bar and then he headed a Harper cross downwards but into the arms of Main.

Scott Thomson pulled up in 42 minutes to be replaced by Stephen Simmons. Glass moved to full back and Simmons joined Young in centre midfield. Bamba`s challenge on Deuchar in the final minute of the half was not to win them a penalty and although Dunfermline had the better and the majority of the chances in the opening 45, at the break it remained no score.

Crawford and Hamilton took the restart as Dunfermline resumed attacking the goal at the McCathie Stand end. Scott Wilson was extremely close with his header on the end of a Harper cross that dropped inches wide of the left goalpost after only 90 seconds of the second half.

Young produced a sweet pass to send Morrison down the left and he rounded his man to release a left footed shot that Main tipped around his left hand post. St Johnstone failed to clear at the corner kick and Kevin Harper got a crack at goal from 15 yards on the angle but fired into the crowd.

It would have been controversial had the Pars and Morrison in particular taken a 61st minute chance after the north side linesman raised and quickly lowered his yellow and orange flag. It was one way traffic for a lengthy spell but still Dunfermline could not find the net.

A challenge on Morrison won a free kick on the edge of the box, Harper`s ball aimed at Bamba deflected behind and from the corner Harper centred the returned ball but neither Crawford nor Bamba could get in a shot. In 65 minutes Main saved Simmons well struck shot off his feet and then Young had a shot that cleared the bar.

It would have been rough justice had Dunfermline lost a goal at this stage but in 70th minute sub David Weatherston raced down the right to send in a cross that Bamba headed behind for a corner. Stevie Crawford had the crowd roaring for a shot a minute later but he got injured in the attempt and after treatment continued. The break had calmed the storm a bit for the visitors and Lawrie popped up on the right to sail an inviting ball across the face of the Pars goal but thankfully too far ahead of Deuchar.

In 80th minute Harper slung another ball in from the right, Simmons challenged for it, Crawford laid in back for Young just eight yards out but he was closed out before a shot could be squeezed in. St Johnstone substitutes began make a difference as they fought for their starting places and Andy Jackson gave Gallacher a test with a driven ball from 25 yards and then pushed Dunfermline back into their own half.

Lawrie fed Harper a great ball that took him into the Pars box but his shot was thwarted before in 91st minute Jackson nipped in as Wilson tried to see the ball out at his left byeline. His cut back wasĀ put on a plateĀ for Paul Sheerin to slip home easily, but the former Caley Thistle man tried to burst the net from 13 yards and blasted off target. A real let off but it would have been rough justice.

No goals then but a better gutsier performance from Dunfermline. Service in from the wings was much better and many chances did come. The point pleased St Johnstone Manager Owen Coyle, pleased with his second successive shut out.Ā He left happy with his side`s efforts and what positives there were to take out of the game. Like his counterpart, Stephen Kenny, he was at pains to stress that the season is played over 36 matches.