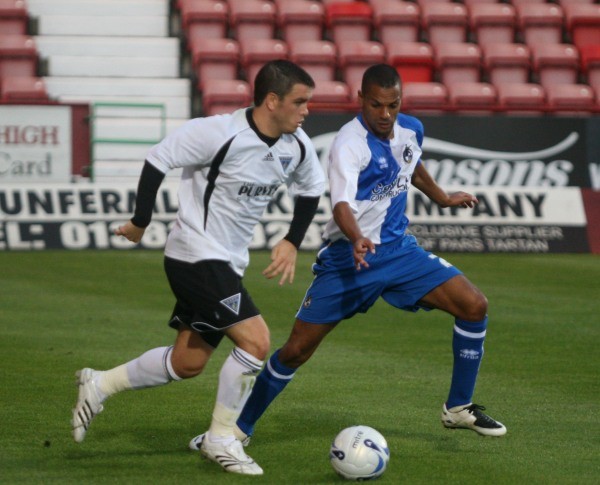 
Another shake up in the starting line up for this the third Pars pre season friendly. Roddy McKenzie back between the sticks and a first showing for Scott Morrison and Tam McManus. Injury kept out Scott Wilson and new signing Kevin Harper.

The team changes ends so that the Pars had to defend with the bright evening sun in their eyes and it was the home side that got the game under way. Dunfermline started well enjoying good possession and stringing passes together. A 7th minute Stephen Simmons ball in from right was behind Stevie Crawford but his heeled attempt was enough to be registered as a shot off target. Bristol`s first shot three minutes later was even more off target though, Chris Carruthers hoisting the ball high over the crossbar from 15 yards out. Back at the other end the same Rovers player delayed his clearance and was charged down by Scott Thomson and the ball squared nicely for Tam McMANUS to stick past Steve Phillips from six yards. The 17th minute goal gave Dunfermline the lead but it was to last only 60 seconds.

A backheeler from Richard Walker deceived the defence and Rickie LAMBERT broke through to slot the ball past McKenzie from the edge of his box.

Phil McGuire had a header wide right but the next near thing was for the visitors when Sammy Igoe was allowed an unchallenged run down the right after accepting a fine switched ball from Lambert. The subsequent cross was inviting but fortunately Greg Shields got the touch to clear.

Bristol were definitely beginning to get to grips with the game. In 29 minutes Shields again came to the rescue blocking a Lewis Haldane shot from the left but still needing the alertness of McKenzie to turn it around his post. Lambert next beat Scott Morrison to gain a shooting position but he was woefully low and wide of the far post.

Dunfermline replied in 36 minutes with an effort from 30 yards from McManus and it just ran wide of the left post. McManus won a corner two minutes later. A short one from Glass to Shields set up Tam with a shot but that was blocked and the resultant corner was headed wide by Simmons.

A second goal did come the Pars way and it was a straight forward through ball from Simmons, picking out McMANUS ten yards out from goal. He turned his defender Byron Anthony and drilled the shot home off the base of the left goalpost. Both sides committed a substitute after the break; McManus being replaced by Hamilton and Igoe by Pipe and it was the Rovers sub who was early into the fray sending over a cross that McGuire had to hook away from the edge of his six yard box.

Bristol kept up the pressure and a prod into the box was collected by Disley only for McKenzie to be adjudged to have pulled him down as he went to his left in an attempt to get around the Pars keeper. WALKER made no mistake with the 50th minute penalty sticking it right as McKenzie went the opposite way. The visitors had other efforts from Walker and then Lambert and began to look much more comfortable. The home support grew more frustrated. The substitution on the hour of Crawford and Muirhead for Burchill and Williamson brought a fresh injection of effort but a stoppage for an injury to the latter took the sting out of that.

Bristol sub Jacobson almost sneaked a quick goal taking a snap shot from distance that McKenzie turned around his right hand post. Then from the corner on the left Lambert had a glancing header that was powered narrowly wide of the right post.

Mark Burchill had a chance in 75 minutes but could not beat Phillips. A stinging shot by Burchill at a free kick three minutes from full time was saved by Phillips and a 89th minute Williamson cross did reach Woods at the far post but a defender blocked the shot.. Rovers go on to face the mighty Blue Brazil while Nottingham Forest will be the next visitors in 48 hours time.