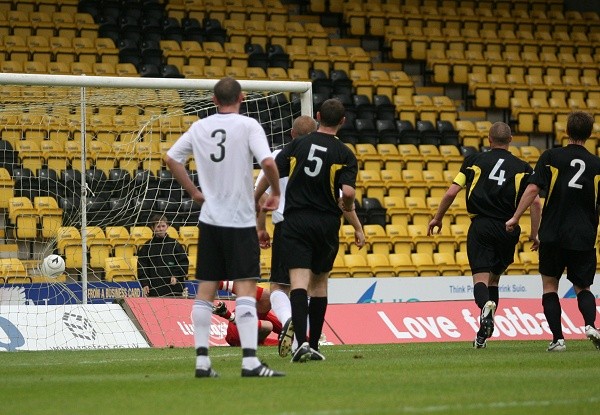 Pars travelled to Livingston for the Sunday afternoon fixture in the SFL hoping for a change in fortunes. Thursday`s striking partnership of Jim Hamilton and Mark Burchill found themselves on the bench as Stephen Kenny went with Stevie Crawford and Tam McManus. With on loan Paul Gallacher not being registered in time, Sean Murdoch continued in goals and Scott Morrison continued for the injured Scott Thomson. Newly appointed goalkeeping coach, Neil Inglis was on the bench for Dunfermline.

The teams came out to a very sparsely populated stadium but the drums were there booming out from the south east corner. The teams changed ends before kick off and the Pars went into their huddle before Lee Matthews and Graham Dorrans got the match underway attacking the McArthur Glen end.

The Lions were the first to test the goalies; Lee Matthews winning the challenge against Scott Wilson to slip the ball to Joe Hamill and Murdoch had to drop to his right to save a well struck shot after just 90 seconds.

It was the seventh minute before the Pars created much of a threat. Then two successive corners from Harper, one from either side pressurised Livi but keeper Mariusz Liberda cleared the greatest danger from a Wilson header to McManus over his crossbar. At the second Livi broke fast and Scott Morrison was called to quash the counterattack on the edge of his own box.

In 17th minute Scott Wilson was forced into heading over his own crossbar after Hamill cut back the ball for Scott Mitchell to fire into the Pars six yard box. the home side won a second corner when the first rebounded off Harper but Livingston failed to capitalise on the opportunities.

Jim Hamilton replaced Tam McManus after just 26 minutes, Tam leaving the field and going straight up the tunnel holding the left side of his side and went off for an X ray for a suspected broken rib. Ten minutes later the sub had two chances to open the scoring. Firstly Harper sent in Shields to the right byeline but Mitchell was quickly in the block Hamilton`s effort and then from Owen Morrison`s return Hammy sent the ball wide left of target.

Another DA corner in 43rd minute brought some hope, this time Scott Morrison picked out Hamilton but the ball came back out right for Morrison to melt one on target but unluckily that was blocked. Livingston failed to clear and there was controversy as Bamba was brought down in the centre on the18 yard line by James McPake. To the Pars fans and players the foul was inside the box but Referee Chris Boyle awarded a free kick outside the box.

After much protestation including a lecture for Stephen Simmons, Chris Boyle paced back the ten yards but Jim Hamilton shot the ball against the wall before the referee`s whistle and earned himself a yellow card. When the setpiece was eventually taken Hammy pierced the wall but the Polish keeper Liberda saved with his feet. Crawford following in blasted the ball over the crossbar.

The Pars fans barracked Boyle and his fellow match officials, Jeff Banks and Bobby Madden with boos at the break and they left the field to loud cries of "You don`t know what your doing".

The second half saw no immediate change in the style of play. It was an even contest with Livingston with the home side threatening first when Lee Matthews broke down the left and squared neatly for Jason Kennedy but he skied his shot into the empty stand.

Hamilton again had a good chance for the Pars when a long looping pass dropped into the inside left channel but James McPake slid in bravely to prevent the striker`s shot seeing the target. On the hour Nick Phinn was welcomed on to the park as he replaced Stephen Simmons and it was a good determined run from the sub that set up Owen Morrison with a shot that the red stripped keeper saved on his knees.

In 65 minutes Darren Young played a ball through the middle that Crawford latched on to but blasted high over the top from the edge of the Livi box. that was to be his last kick of the ball as Mark Burchill then came on, Dunfermline`s fourth striker of the Sunday afternoon.

Burchill raced on to a nice pass from midfield played through by Owen Morrison but unfortunately shot narrowly over Liberda`s crossbar. At the other end Liam Fox forced a good save out of Murdoch and Livingston enjoyed some pressure with a couple of corners. That caused few problems but when Mitchell`s direct ball sent Craig in on the top of the box Bamba tangled with the sub, he tumbled, a penalty was awarded and Bamba was dismissed for a second yellow card.

As if that wasn`t bad enough Dave MACKAY stepped up and hammered the ball into the left side of the net. Eight minutes remained for the Fifers to rescue the match. In 89th minute Owen MORRISON grasped the opportunity sending a 35 yard free kick through the Livi wall and into the net.

This heralded an exciting finish with Murdoch saving a fine shot from Liam Fox and then Shields almost getting on the end of a Scott Morrison corner in from the right. In the end it finished one goal and one point each.

You could not fault the effort put into this game by Stephen Kenny`s team they tried like bears but the Lions just would not lie down. The point saves the Pars from their worst league start since season 1991-92 but they have still a lot to do.