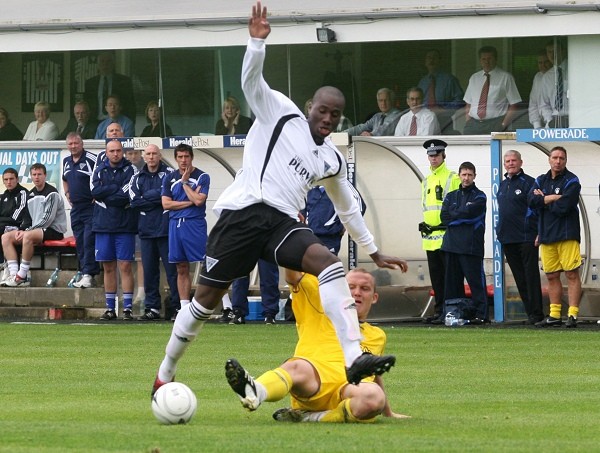 There were three changes from the side that lost the opening fixture last Saturday. Phil McGuire was out suspended, Scott Wilson had a calf injury and Stephen Simmons dropped to the bench. In came Sol Bamba, Stevie Crawford and, for the first time since April 2005, Scott Thomson.

For Jim McInally`s Morton, Kieran McAnespie and Kevin Finlayson were out and Brian Graham and Dean Keenan replaced them. The Pars kicked off attacking the East Stand and in the third minute Crawford shot a Harper cross at goal but Peter Weatherson got in a telling block.

Newly promoted Morton were under the cosh with the early Pars pressure and their first real attempt at goal was a Brian Graham belter from 25 yards that Greg Shields defended and then at the other end two Pars corners came closest when Stewart Greacen just edged Sol Bamba to the ball in the six yard box. Morton began to win more possession with former Pars player Chris Templeman trying especially hard to convert some of that possession into creating an opening. It was the 2004-05 season when a Dunfermline player scored the first league goal of the season at East End Park (Andy Tod v Dundee United) and yet again the visitors were the ones celebrating first. In 21 minutes Morton full back Peter WEATHERSON found the way. Having won the ball he evaded the challenge of Thomson to release a shot that dropped stunningly into the net.

The travelling support erupted into song and that was only briefly paused to welcome yet another Morton free when Bamba and Templeman got entangled. From 25 yards out Jamie Stevenson hit the free kick into the wall and then another set piece allowed Weatherson a shot from 35 yards out low to the keeper`s right but the red shirted McKenzie dropped on his side to save. Stephen Kenny`s side came back with Shields popping up on the left side of the Morton penalty box to cut back a great 34th minute ball for Crawford. Stevie let rip and felled Keenan and Lee Robinson smothered the loose ball ahead of Mark Burchill.

Dunfermline began to look slightly more in control but their passing let them down at times and Morton found themselves presented with the ball all too often. Granted they were defending in depth but the home team who were booed off the park at the break were going to have to do better in the second half. 
Sol Bamba tried to inject some much needed urgence into the situation with a 47th minute solo beating off the challenges of Templeman and McAlister before Weatherson robbed the ball off him on the edge of the Morton box.

Six minutes later the Morton fans were back on song when Chris Millar got away from Bamba and evaded the challenge of Scott Muirhead to fire in an effort that went narrowly wide right. In reply Dunfermline had a header over the bar from Burchill who was on the end of a Harper cross in from the left corner flag. McManus drove a 30 yard shot wide before Stephen Kenny replaced Mark Burchill with Owen Morrrison in 57th minute. Harper went back to the right side and McManus assumed a much more involved role as striker. He immediately played a neat back flick that set himself up for a pop from 20 yards but unluckily that was blocked out.

As the rain pelted down the Pars play prompted cries of "you`re not very good" from the support behind McKenzie`s goal and had Templeman been able to return McAlister`s ball then there could have been more evidence of that. A 66th minute Stevenson corner from the right was headed wide by Weatherson and for the time being Dunfermline lacked bite. In 75th minute Graham directed a header at McKenzie but at the other end Robinson was having a break. Jim Hamilton entered the fray replacing Crawford and then Simmons for Young. With 80 minutes come and gone time was running out for the Pars when Robinson stepped forward to pluck Harper`s cross out of the air before it could reach Hamilton.

A good opportunity to salvage something was presented to sub Stephen Simmons. He broke into the left side of the Morton box and centred for McManus but his header failed to get the right direction on it and in a scramble with a host of yellow stripped Morton defenders he too failed to trouble the keeper..

In the 90th minute a floated ball from Muirhead was headed down from Hamilton to Simmons but Robinson was out sharply to save the day. Things could only get better but then Stephen Glass collected another yellow card and Dunfermline finished with just ten men. It finished with another defeat and the Pars rooted to the foot of another league table.