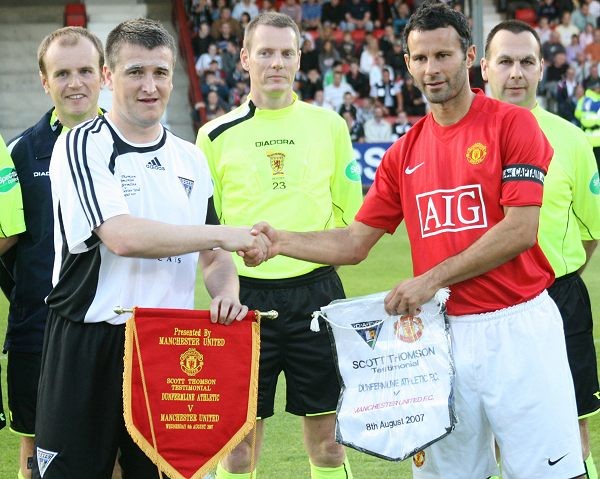 There was a fantastic buzz about East End Park from long before kick off as the people of Dunfermline prepared for the visit of English Premiership champions Manchester United. The match was sold out 36 hours before kick off, the first time the stadium had sold out since becoming all seater and Dunfermline`s largest attendance since season 1998-99. The match was transmitted live by MUTV with Lou Macari summarising in the gantry above the North Stand.

Sir Alex Ferguson paid tribute to his old club by bringing north an all star side including Wayne Rooney, Paul Scholes, Ryan Giggs and new signing Owen Hargeaves. Stephen Kenny used the night to start players who had not featured at Hamilton on Saturday and it was big chance to impress against the toughest opponents. Club Captain Scott Thomson entered the pitch through a guard of honour formed by the players of both sides and Stevie Crawford and Jim Hamilton kick off with Dunfermline defending the goal at the McCathie Stand end. Defending was very much a full time job as Paul Scholes proved that he was back to match fitness, Owen Hargeaves made his pitch for a place in the starting line up and Rooney and Giggs enjoyed the pace and the ability to pick their passes.

The match was never ever a contest with the spectators accepting that right away and applauding the familiar faces from television in a golf championship style with sections putting their hands together whenever the Manchester United stars came near them.


First danger was created by the home side with a Nick Phinn drive from outside the box after 70 seconds deflected for a corner but United got Morrison cross away with ease. The eagerly awaited display of class first appeared in eight minutes with Wes Brown sending Darren Fletcher speeding down the right and Rooney was wide with his half connected shot.

Next minute a big fright came the Fifers way when Sol Bamba let in Rooney but Scott Thomson and Bamba were back to put off the England striker and Sean Murdoch was out to collect when really Wayne should have scored.

In 11th minute Phinn again showed good control winning possession back from Scholes to win a corner when his shot was blocked. Owen Morrison`s delivery was defended out as far as Stephen Simmons and he combined cleverly with Jim Hamilton before the big midfielder rocketed the ball into the sidenetting from an angle on the right.

The opponents were caught offside a few times before midway through the first half a ball through the middle was missed by both Bamba and finally Thomson as Chris EAGLES latched on to Ryan Giggs pass and fired passed the helpless Murdoch. Rooney was through on the right three minutes later but this time the young keeper touched away what looked like a certain second goal. Bamba too redeemed himself for his earlier slip up making an impressive interception to deny a Giggs ball into the Dunfermline box.

At the other end Phinn and Morrson continued to be the greatest threat with Nick feeding Owen on the left side of the United box but unluckily the Irishman`s shot whizzed wide left. But in 36 minutes Ryan GIGGS demonstrated how to finish fixing on to Rooney`s defence splitting pass to set up goal two.

The match was unusually quite for the size of the crowd but Darren Fletcher attempt in 43 minutes that was inches wide of Murdoch`s right hand post raised the ooohs. The first half had past with United patiently building up lay but relying heavily on through balls. For the Pars Sol Bamba displayed some of the fine tackles that made him such a start last season.

With a raft of Pars substitutes at half time it took the new line up a little while to settle and they were glad to see Murdoch hold an early Wayne Rooney shot on target. In 49 minutes Tam McManus`s swift progress straight towards goal was halted 25 yards out and from the free kick Kevin Harper tried to find Bamba on the left side of the box but Referee Kenny Clark blew up for the United wall`s encroachment and from the retake Scott Thomson lifted the ball over the Reds wall for Crawford to run in and fire a great shot at goal that tested the Polish keeper.

Two minutes later Eagles should have scored from a Fletcher cross but blasted over the top. Another seven minutes past before Eagles broke through the middle to send the ball wide this time. When Owen Hargeaves burst through the centre in 64 minutes Sean Murdoch came out and caught him. A penalty and a red card challenge but of course in the circumstances young Sean stayed on to face Wayne ROONEY who like on Sunday placed the spot kick to the keeper`s right and it was 3-0 to Man U. The Pars made another three substitution Murdoch finding himself `sent off` by his own Manager and it was birthday boy Roddy McKenzie who took over and was immediately called upon to make fine one handed save to thwart Rooney. The home fans were brought some excitement at the other end when a Crawford pass put in McManus but Kuszczak saved the well struck effort.

As the final ten minutes beckoned the English champions tried some silky stuff but the Pars defence held firm until a mistake in the opposition half by Tam McManus. He passed back a perfect ball to ROONEY letting him race at goal from the edge of the centre circle and place the ball inside the left goalpost from the edge of the box for an 88th minute fourth.

Scott Thomson was substituted by Jim Hamilton in the 90th minute and was accorded a standing ovation. No need to ask which team was Manchester United but this was a real privelidge for players and fans alike to see such quality grace the East End surface. The large crowd filtered out to Queen`s "Don`t stop me now".