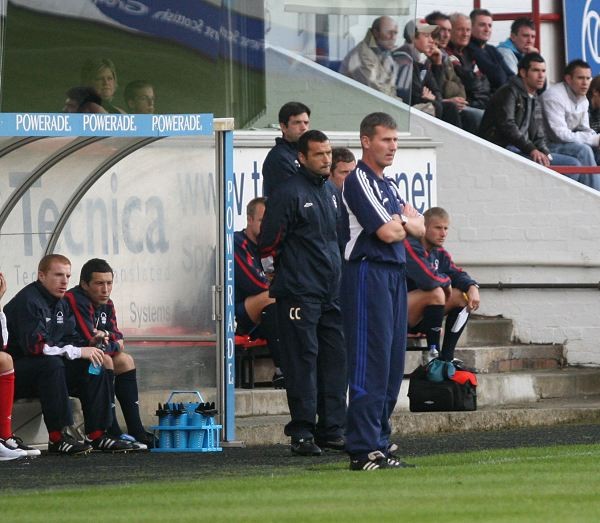 Scott Wilson and Kevin Harper returned for the Pars. Mark Burchill started as did Nick Phinn. Scott Thomson, Stevie Crawford and Owen Morrison were on the bench alongside Sol Bamba. Colin Calderwood made eight changes from the Forest side that won 3-1 at Rugby Park on Tuesday night the most unpopular seeing Neil Lennon dropped to the bench.

Forest won the toss and with the sun behind a cloud elected to attack the McCathie Stand end. Dunfermline kicked off but were quickly defending with McKenzie deployed right away. The visitors forced a corner on the right after 60 seconds and were very unlucky to see Julian Bennett`s powered down header at the far post just kept out by McKenzie. For the Pars Stephen Glass came close from an early free kick from 30 yards but Forest enjoyed a fair amount of pressure for the first quarter of an hour. McKenzie had to sprint out to dive at the feet of Emile Sinclair and then when Grant Holt burst through on the left the Pars keeper was happy to concede another corner. Wes Morgan`s header at the corner was well defended but there was another quick fright when a break on the right was cut back for Lewis McGugan to fire in a shot from 18 yards that flew wide to the right of target. The Fifers fought to get back into the game and an 18th minute move from Simmons through Burchill and Glass set up McManus with a good chance that was saved by Dale Roberts. Four minutes later the East End Park side took the lead. McManus fed the ball out right to Harper whose cross was defended only as far as Glass on the edge of the box. His return was ably directed down into the bottom right of the Forest goal off the head of Mark BURCHILL.

Two minutes later Glass launched a rocket of a shot that was blocked by Brendan Maloney and then with 25 minutes gone the visitors got an equaliser. Holt burst through on the left side of the box, his shot was deflected off the outstretched boot of Wilson but only into the path of Emile SINCLAIR who had no trouble netting since McKenzie had already committed himself to the first shot.

Burchill was rightly aggrieved when he was pushed away from a Harper cross on the half hour and the keeper collected. McManus got in a shot after a nice pass from Glass but the keeper saved and then it was back to the other end.

Bennett managed to travel down the left to square in a ball across the six yard box but there were no takers. Commons had a shot saved and then Holt sent the all flying over the crossbar. As half time approached another McManus attempt from 20 yards skimmed beyond the left goalpost. Scott Thomson and Calum Woods replaced Greg Shields and Phil McGuire for the restart and Forest fielded Matt Lockwood in place of Maloney and Scott Dobie for Holt.

Just six minutes into the second period McKenzie pulled off a wonder save from Dobie as he looked to have diverted a McGugan delivery from the right. With the ball appearing to be destined for the far right of the goal the Pars keeper leapt to his left to somehow keep the ball out.

In 53 minutes a Muirhead break then check inside set the ex Don up for a crack at goal from 20 yards but the shot was inches wide of the right post. Bamba and Crawford came on for Burchill and Simmons prior to Muirhead receiving a McManus pass to test the keeper yet again. Forest replied with Sinclair sending substitute Arron Davies away down the left and his cross went zooming through the box with just a touch required.

Nick Phinn produced a screamer of a shot in 71 minutes that was unlucky to zap past the left goalpost. When Iain Williamson ran on to take the place of Kevin Harper eight minutes later he must have been puzzled by the welcome of boos but when he turned around discovered that the `warm` East End welcome was for Neil Lennon.

Stevie Crawford crashed a shot wide while at the other end Dobie forced another great save out of McKenzie before the same Forest player headed into the stand from the corner. The match looked destined to remain level but 90 seconds from the end a fine solo effort from Owen MORRISON heralded the winner. He made space for himself before despatching a fine shot from 20 yards that found the left side of the net.

This was a better test for Stephen Kenny`s men. They remain undefeated in five pre season friendlies and despite only notching two goals did create a considerable number of shooting chances. Bring on the Accies!