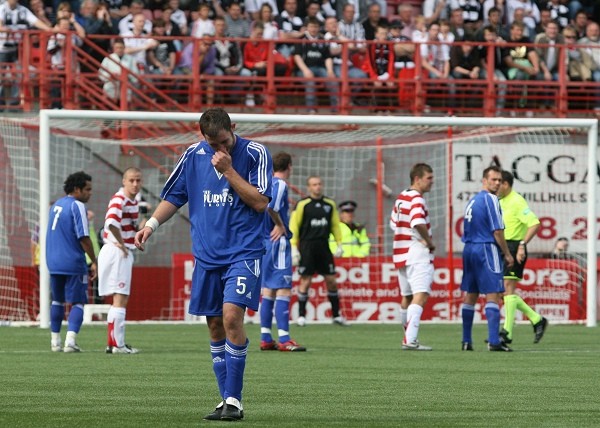 Five of the side that featured in Dunfermline`s last competitive action at Hampden started at Hamilton and it was the new look Tam McManus that got the new season underway. Dunfermline attacked the goal in front of the very vocal and jovial travelling support.

Four minutes and twenty seconds into the match though Accies scored with their first attack of the game. A swift break down the left by Mark Gilhaney who turned inside Greg Shields produced cross that Stuart TAYLOR headed home for his debut goal from eight yards. The home side followed that up with a Richard Offlong shot from the edge of the box that McKenzie held with ease. At the other end Tam McManus swept a seventh minute shot wide right but this was not the kind of start that Dunfermline needed.

Four minutes later Scott Wilson was forward for a Shields free kick lofted in from the right touchline. The crossed ball was not clearly taken by either side but McManus latched on to it to shoot and when a deflection took it to Mark Burchill he was desperately unlucky to turn the ball over the crossbar

Next Offlong found McArthur with a ball in from the right side of the box and McKenzie was forced to turn the header over the crossbar. That was defended off Scott Wilson`s head before a simple long ball up the park from McKenzie was not read by Chris Swailes and Mark BURCHILL nipped in between the centre half and Bryn Halliwell to steal a goal. Back on level terms Dunfermline pressed. McManus shot one at the keeper that Halliwell took after a bounce back off his chest and then chased another high ball that Halliwell grabbed ahead of him.

Hamilton were keeping McKenzie alerted principally through Richard Offlong but thankfully his potentially dangerous attempts came to nothing.

After a swift move from McManus to Muirhead on the left wing and centred to Young, a fierce shot was deflected for the first of three corners. These successive corners were punctuated with a looping Kevin Harper shot that was very close as it went wide right.

A 41st minute free kick just outside the Accies box on the right side was sent into the six yard box by Stephen Glass with Bryn Halliwell injuring himself as he punched the ball clear. The former Pars keeper recovered and was kept busy as the Pars kept up the pressure on the Hamilton goal but it was the home side that almost grabbed a half time advantage.

A square ball across his back four was intercepted by the lively Offlong and Dunfermline were fortunate that his shooting did not match as he contrived to shoot wide from 16 yards when through on McKenzie. The second half was 78 seconds old when an Offlong ball into the box caught out Phil McGuire and he brought down Taylor as the Accies player set his sights on goal. Dougie McDonald showed the Pars defender his red card and to crown it OFFLONG sent the ball into the right side of the net from the penalty spot. Reduced to a three man defence the visitors lived dangerously as their hosts tried hard to cash in quickly on their one man advantage. Fifteen minutes of the second half had passed before Dunfermline mounted an attack. Darren Young charged down Mark McLaughlin but despite the assistance of McManus and Harper Halliwell was not to be tested. Gilhaney was allowed two crosses from the left that caused some concern and had Offlong not timed his leap wrong there might well have been further pain for the Pars.

At the midway stage in the half Tam McManus and Stephen Simmons were withdrawn to be replaced by Stevie Crawford and Owen Morrison. There was a glimmer of hope as Young got himself into a shooting position but from 25 yards was outside the right post.

Next Harper and Crawford combined to get a ball in for Young but his effort as he controlled the ball running away from goal was off target. Kevin Harper followed that with an individual effort getting close to the keeper on the right byeline but Halliwell saved.

Seven minutes from the end a Neill free kick was received by sub Brian Wake on the top of the box and his shot was destined for the right side of McKenzie`s goal until Wilson deflected it for a corner. Hamilton kept up the pressure with a Elebert header from a subsequent corner.

Jim Hamilton came on with three minutes remaining but it was the club of that name that looked more like scoring, Shields doing really well to block a Gilhaney effort from 15 yards but there was to be no change to the scoreline or result.

Nobody said it would be easy. On this showing it certainly won`t!

Picture Gallery for this match