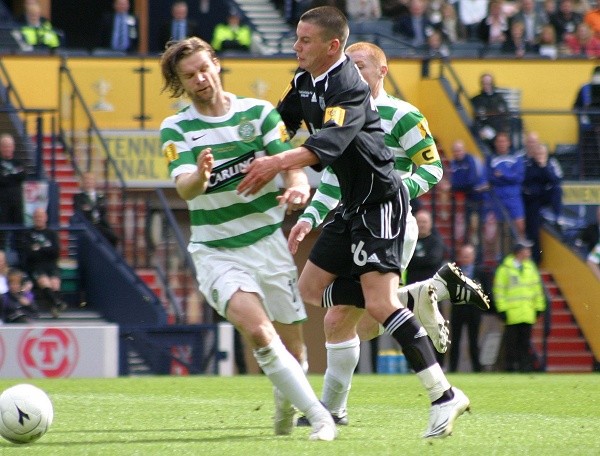 How strange it was that the team relegated from the SPL and their supporters travelled to Hampden Park for the showpiece of the Scottish football season, the Tennents Scottish Cup final.

52 points may have separated the clubs when the line was drawn on the league season but the Pars unbelievable cup form gave them much optimism that champions Celtic could be the final victim of Stephen Kenny`s side. Kenny was keen to rewrite the history books; to have cup victories recorded on colour television even though it was still a black and white success that he sought. His selection raised the usual eyebrows bringing in Scott Morrison for his first match since before the semi final. Scott Muirhead was pushed further forward and Mark Burchill and Scott Wilson returned to the team in the other changes from the side that disposed of Hibs in the semi final replay.

Celtic made two changes from their semi final side; Jean-Joel Perrier Doumbie and Kenny Miller being handed starting places in preference to Gary Caldwell and Derek Riordan. Prior to kick off Jim Leishman and Rod Stewart paraded the prized trophy to the fans and at that stage the Fifers support was certainly ahead on the flag waving. As the teams emerged to the deafening din of the National Stadium`s PA system flares and fireworks rose from the far side of the pitch. The Pars grouped for a pre kick off team picture as the large T symbol that covered the centre circle was carried away.

The captains met and took the toss with the match officials before both sides went into a huddle.

The teams changed ends before Miller and Vennegoor of Hesselink kicked the game off. de Vries was the first keeper to take a touch clearing a first minute pass back.

A Nakamura corner on two minutes was ably fisted clear. Within the minute a Muirhead clearance gave Jim McIntyre an opening as he ran on to the ball. A great diagonal run by Mark Burchill gave McIntyre the opportunity to play the former Celtic striker into the penalty box but his left footed shot from 12 yards was low and wide of the right post.

In 8th minute Paul Hartley squeezed out Burchill as he threatened to break into the box on to another good Muirhead pass. Celtic pressed and the Pars defence was relieved to see Nakamura push the ball too far ahead of him and out for a goal kick. Five minutes later Kenny Miller evaded the offside trap and Wilson tracked him back close enough to allow de Vries to come diving out at the striker`s feet.

Celtic then survived a narrow escape when McIntyre dispossessed McManus on the right edge of the penalty box and yet again the defence had to put in a telling tackle to deny Burchill. Celtic were the first side to put the ball in the net but fortunately Hartley fouled de Vries as he went for it and although the Celtic crowd erupted to greet Nakamura`s touch in Kenny Clark was in no doubt that the big Dutch keeper had been held down.

Clark then deemed that Lee Naylor had pushed Burchill as he ran on to long through ball. The 25th minute free kick was awarded in a central position 35 yards out. Hammill and Morrison stood over the ball as the defensive wall was formed but it was the latter who took the strike that skimmed off the net as it headed towards the ball boys.

On the half hour Kenny Miller created the best chance of the match so far. Spinning to deceive Scott Wilson he sent in a wicked delivery that Jan Vennegoor of Hesselink headed wide from eight yards. Dunfermline responded playing the ball across the face of the Celtic box from Hammill on the right to Muirhead and then Young laying off for Morrison but still there was no way through.

The first yellow card was shown to Aiden McGeady for a nasty tackle on Greg Shields and after the resulting free kick was sent in by Hammill it was Scott Wilson who returned it for Morrison to tee up Burchill with a header but still Boruc was not tested. Burchill was showing supreme effort but was punished for his over enthusiastic tackle on Perrier Doumbe in 36 minutes.

Three minutes from the break de Vries held well from an inswinging Nakamura corner from the right. The first half performance gave the Dunfermline fans great heart and it was their end that was on song as the first 45 minutes expired having just attacked their first corner of the final and then seen Scott Morrison drive a yard wide on the whistle.

The second half started promisingly for the underdogs. McIntyre forcing a corner in 90 seconds and Young winning another with a deflection on his shot from Boruc`s punched clearance. Celtic woke up a bit and caused some good defending and a McGeady break on the left setting up Miller for diving header on 50 minutes that de Vries did well to hold.

Six minutes later an Adam Hammill break that included a cheeky lift of the ball over Neil Lennon, was blocked by Steven Pressley earning him a yellow card and allowing the Pars to flight in a free kick that Souleymane Bamba came close to turning in at the far post. Craig Beattie came on for Kenny Miller as the Hoops looked to turn the pressure off themselves and on to the Pars.

On the hour McIntyre`s hard work created a shot for Young but a defender took the sting out of the shot and Boruc gathered. At the other end Gordon Strachan got the attacking play he was seeking win Lee Naylor speeding in from the left, playing the ball off Vennegoor of Hesselink before driving a vicious shot from 16 yards that de Vries saved.

Neil Lennon`s substitution in 66th minute stunned the Celtic faithful and it was sad really to see him storm straight up the tunnel without acknowledging the support. The Lennon final had ended.

Bamba`s 71st minute tackle kept Celtic out and then Stevie Crawford was introduced for Scott Morrison just as Burchill almost robbed a pass back off Boruc. Stevie`s third Scottish Cup final in four seasons could it be third time lucky?

Crawford laid the ball back for captain Shields to swing over a lengthy ball to the far post where McIntyre rose above Pressley but his header was destined for the sidenetting. Bamba again made a wonderful headed clearance in 77 minutes to deny Vennegoor of Hesselink getting on the end of a Nakamura cross.

Craig Beattie then looked as though he was going to spoil Dunfermline`s afternoon. With ten minutes left his driving run in from the left set him up for a powerful shot that skimmed across the face of the goal. Still Dunfermline took it back to Celtic and a free kick 40 yards out was lifted into the Celtic box by Hammill but no one could get get in the header that would have given the already loud Pars support even more to shout about.

Instead it was the Celtic support who erupted in 85 minutes when Jean-Joel PERRIER DOUMBE started and finished a move that broke the deadlock. He pushed the ball wide right before nipping in front of Shields to send the deflected cross into the far corner of the net despite the efforts of de Vries and Bamba on the line.

The 19 year old Iain Williamson came on for Mark Burchill but as the minutes drifted away Celtic with the lead played with confidence and held out for what was certainly not one of their most comfortable wins of the season. Hard lines Pars; they fought well and gave their fans plenty of optimism for so long. Darren Young was named Tennents Man of the Match. No historic victory then for the brave runners up. Until the next time then.