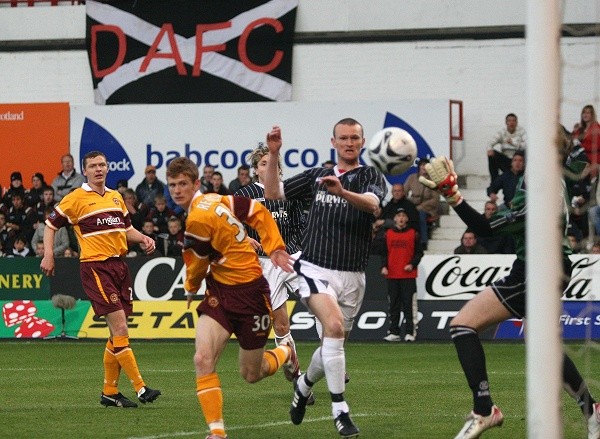 For the first time since taking over at East End Park, Stephen Kenny named an unchanged starting eleven. Phil McGuire was available after suspension but there was no room for him, not even on the bench. Motherwell had� David Clarkson back to lead the attack and Paul Quinn replaced the injured Danny Murphy.

Scott McDonald kicked off for the visitors playing towards a very small travelling support in the East Stand. Hammill enjoyed a fair bit of space in the opening minutes and the sizeable Pars support were hopeful that they were going to get a real Adam Hammill Show.

In the sixth minute that show got off to the best possible starts. Scott Muirhead burst through into the Well half on the left side. He was chopped down as he released the ball to Tam McManus allowing Hammill to receive the ball wide left. He shuffled his way into the penalty area deceiving Martyn Corrigan with his step overs and getting a cross in that McIntyre challenged for. The ball was defended poorly and Jim O`BRIEN drilled the ball into the net from the angle of the six yard box.

It took only five more visit before that lead was doubled.� Stephen Glass� floated over an inviting ball from a free kick on the right 40 yards out and Scott WILSON timed his run beautifully to get in front of Reynolds and head into the right side of the Steelmen`s net from 15 yards.

McDonald warned the Pars just four minutes later with a run that evaded a number of Pars defenders to thread a cross through the six yard box that Darren Smith narrowly failed to turn into de Vries` net.

Hammill thumped another ball into the `Well six yard box from the left side but it was Muirhead in 24 minutes who forced Graeme Smith to work with a shot from 30 yards that was on target but the keeper held at the second attempt. Next a long clearance fro Wilson was weakly played back to his keeper by Reynolds but Smith was out to thwart McManus`s efforts to steal in.

Pressure was maintained and a corner was won on the right. Glass sent that in but it was defended as far as Hammill who again required the attention of two defenders to crowd him out. McManus had a swift break towards the right corner flag and delivered a great ball square for McIntyre but the Pars striker just could not get his head to the ball.

In 36th minute Scott McDonald was presented with Motherwell`s best chance of the match, this far when Krisztian Vadocz laced a neat ball through. The Aussie was just twelve yards out when he produced a fine left footed shot that beat de Vries and slipped outside the right goalpost.

As the interval neared Dunfermline turned up the heat on `Well yet again. Shields and Wilson were forward to try their luck at another corner and Bamba appeared to be pushed away at the next corner as it was swung over from the right by Glass.

It had been a great first half for the Fifers but at the break Maurice Malpas would be re-grouping his team in the hope that something could be recovered in the second half.

Before the first minute of the second 45 had past, Graeme Smith had to tip a dipping McManus free kick from 30 yards over his crossbar. There was a fright for the Dunfermline defence in 51 minutes when Bamba scrambled to get himself into position to collect a lengthy clearance at a Pars free kick. The central defender slipped as he went to power the ball away with a header meaning that McDonald was presented with possession and he knocked the ball into the empty area ahead of the Pars penalty box. Fortunately Shields was quickly in to sweep away the danger.

The third goal that would make the second half much more comfortable came from the penalty spot in 58 minutes. A long ball from de Vries was controlled by McManus and he prodded the ball on for Jim McIntyre to burst through at the top of the `Well area and he went down in the challenge from Reynolds. Referee Dougie McDonald point to the spot and Stephen GLASS hung on to the ball as several players fancied their chances. The on loan Hibee sent the ball on to the right post with a left footed shot and the ball broke into the net off the upright.

Gary Mason and Greg Shields pushed up the right side and it was Hammill who eventually took the shooting chance but was too high. Then as the match entered the final quarter Mark Reynolds handled the ball as McIntyre threatened to get in one on one with Smith. As last man he had no complaint� when Dougie McDonald raised the red card and the Lanarkshire side were reduced to ten men.

The match looked as though it had seen all its drama but four minutes from time sub Ross McCormack worked his way into the Pars box and was tumbled under the challenge from Scott Wilson. The referee pointed to the penalty spot and showed Wilson the red card. McDONALD took the spot kick giving de Vries no chance.

The red card had hardly settled in Dougie McDonald`s pocket when Scott McDonald chopped down Scott Muirhead and Motherwell were reduced to nine. Dunfermline took full advantage of the disarray in the opposition ranks. A swift move saw Glass switch the ball wide for Mark Burchill and he turned the ball across from the byeline on the left. Sub Jim HAMILTON rose to head the ball back across goal for number four.

A very satisfactory win but with St Mirren facing Motherwell on Saturday it is perhaps no good news that they will be without McDonald, Reynolds and the injured Paterson. Scott Wilson will be a big miss at Inverness on Saturday, maybe just as well Phil McGuire was rested.