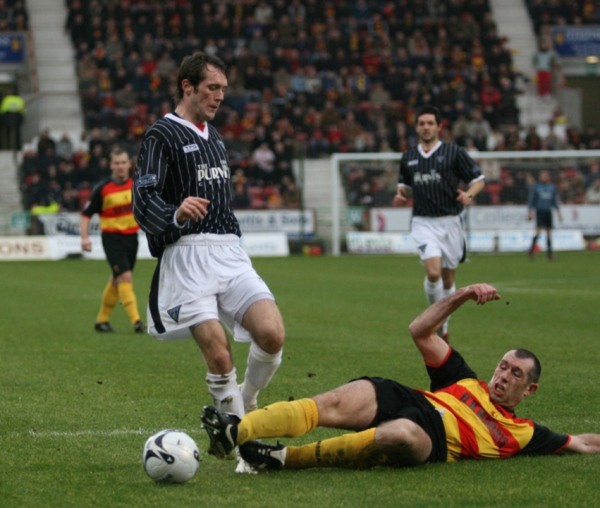 Both teams made changes because of players being cup tied.Ā Stephen Glass sat out the game for Dunfermline and Alan Archibald for Thistle.Ā Ā Darren Young failed to reach fitness in time for consideration and Greg Shields (hamstring) and Mark Burchill (groin) remained sidelined for the Pars.

Scott Morrison replaced Stephen Glass and Stephen Kenny chose to leave Stevie Crawford on the bench with Owen Morrison drafted back into the starting line up. Thistle were missing the injured Simon Donnelly but former Par Derek Young made the starting line up and Pat Keogh came in for Archibald.

After a five minute delay to the kick off,Ā theĀ ParsĀ kicked off attacking the goal at the McCathie Stand end but withĀ the 2297 strongĀ travelling support encouraging on the opposition at their backs. Visiting Manager Dick Campbell was later to say that he wished the match had been delayed for a further three as the home side got off to a flying start.

Owen Morrison gathered an overstruck pass on the left touchline just inside the Partick half, raced down the wing and after cutting inside an opponent delivered a fine ball into the box.Ā Stephen SIMMONS timed his run to perfection to meet the ball withĀ a glancing header that sent the ball beyond Kenny Arthur and into the goal at the right post with less than four minutes on the clock.

The Fifers had another opportunity to grab a goal on the quarter hour when they were awarded a free kick on the right corner of the penalty box for a challenge on Jim O`Brien.Ā Unfortunately Scott Morrison had far too much on the ball and it sailed out beyond the right post.Ā

Thistle then rallied winning a free kick in a central area 40 yards out after Simmons and Mason squeezed out Allan Russell.Ā Jimmy Gibson`s shot from the setpiece was deflected left for a corner and even though that failed to trouble the Pars defence, Darren Brady pushed up toĀ volley into the Thistle support from 30 yards.

Further Thistle pressure came in 20 minutes with Dorus de Vries having to race out to the edge of his area to clear away from Jimmy Gibson with a sliding tackle. Four minutes later it was the Thistle defence whoĀ struggled to contain the Fifers. Scott Morrison pushed up, playingĀ in Hammill and then Hamilton before he got the ball back for an attempt on goal from 16 yards but Thistle blocked that.Ā Owen Morrison retrieved the ball and travelled across field before chipping in a ball that escaped out for a goal kick as Arthur felled Hammill in a challenge.Ā

Greg Ross won the ball on the right to set up Adam Hammill with a speedy break up the wing but he hung on too long and his shot came to nothing. In 32nd minute Owen Morrison switched play with a beautiful cross park pass that allowed Hammill to force his way forward and whack a low ball from the right through the six yard box that was deflected behind for a corner.

The home support were claiming for a penalty in 37th minute when Jim O`Brien threatened to latch on to Scott Boyd`s weak header back on a long through ball. Keeper Kenny Arthur came out and O`Brien was spilled on the right side of the penalty box but clearly took the ball in the progress.

Two minutes from the break Simmons ghosted in to meet a Scott Morrison cross from the left but this time his header went wide of the right post. Dunfermline finished the half with two corners, Hamilton`s header from the first sneaking outside the left post.

It was a very good first half display from the Pars with Owen Morrison and Jim O`Brien proving particularly difficult for the Maryhill side. Only one goal in it though and the cup tie was only half way.

Thistle started briskly but suffered a set back when they lost Barry Smith after just four minutes with a hamstring injury. Adam Strachan was introduced meaning that DerekYoung moved to right midfield and Billy Gibson assuming the right back job.

Owen Morrison took the ball on a run, receiving the roll out from de Vries and ending up with a shot from eght yards that was deflected away from goal. In 57th minute O`Brien was shouldered out by Keogh at the right byeline and two minutes later Owen Morrison should have increased the lead. Simmons in midfield prodded the ball to Hammill in a central position 40 yards out. His release to the Irishman set him up nicely but the shot that came after a check,Ā bounced back off the right post.

On 63 minutes Thistle forced two corners after a difficult cross was turned behind. Hamilton headed the first behind again then Scott Wilson had to head clear.Ā The pressure was piled on with another two Jags corners but Hamilton blocked at the first and the defence came out on top at the next.

As the game entered the final quarter it was all Thistle but they still failed to get any real shot at de Vries` goal. A Billy Gibson cross from the right had the ball pinballing around the home box. A 72nd minute free kick from Jimmy Gibson was headed out but Darren Brady drove in the clearance and de Vries had to save the deflected shot.

Jamie McCunnie replaced the tiring Owen Morrison and the bite seemed to be taken off Partick`s thrust. In 77 minutes O`Brien squared the ball just twelve yards out but the central defence did enough to prevent Hammill a shot.

The on loan Liverpool lad took a pass from Morrison to travel the length of the park but when reaching the 18 yard line looked to shoot when O`Brien and Hamilton were better options. The shot earned a corner as it went wide of the right post and it seemed that Dunfermline just could not grab a second goal.

With Stephen McConalogue replacing Young the sub almost had the golden first touch in 83 minutes but Phil McGuire made the telling interception. Then four minutes from time Stephen Simmons headed Dunfermline`s long awaited second goal. The work was all done by O`Brien as he jinked in on the right side of the box.Ā His initial cross was blocked but he met the ball at the byeline and SIMMONS was on the end of the cross to find the net off the crossbar.

Disappointingly both O`Brien and Simmons received yellow cards for their celebration and gesturesĀ in front of the Thistle support. The Pars are therefore through to join Hibs in the draw on Thursday night for the Tennents Scottish Cup Semi Final but they will be without their goalscorer since Stephen Simmons has already received one yellow card in this season`s Scottish Cup.

The draw for the semi-finals of the Tennent`s Scottish Cup will take place on Thursday, 1 March at 6.50 pm. It will be shown live on BBC Scotland and Sky Sports. The semi-finals are due at Hampden Park on 14 and 15 April, with the final on 26 May.