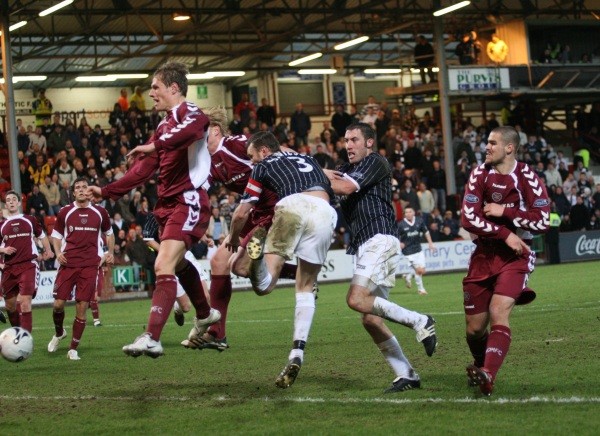 There wasĀ a different look to the Pars side that faced Hearts for the Cup tie. Greg Shields was out with a torn hamstring and Scott Muirhead with a knee injury, bothĀ sustained in the match at Tannadice, Stephen Glass was Cup tied and Mark Burchill started in preference to Jim Hamilton. Adam Hammill was in for his first Dunfermline start and the team was set up to attack with pace. Hearts made five changes from the side that started at Ibrox the previous week and there was no surpriseĀ that Michal Pospisal returned given his goal scoring record against the Pars.Ā Scotland keeper, Craig Gordon was on the bench.

Dunfermline kicked off but it was soon the Cup holders attacking the goal at the McCathie Stand.Ā Hearts forced three corners within the first two minutes and there were loud but unwarranted appeals for a penalty from the large travelling support when Mikoliunas went down in the box at Scott Wilson`s challenge.

Dunfermline`s first threat was from Phil McGuire as Hammill lofted over a free kickĀ from the left in ninth minute but he couldn`t get close enough to it to trouble Steven Banks. Five minutes later Greg Ross played Stephen Simmons in on the right side of the box but the Pars midfielder was squeezed out just eight yards from goal.

Though Hearts had started strongly Dunfermline began to edge their way into the game. Ā Jim O`Brien forced a corner off Andrew Driver and when Scott Morrison delivered it in from the right Burchill met it but his header went over the crossbar.

The cup tie was fairly even with goalmouth action limited but the temperature rose in 29 minutes when Driver bulldozed Ross on the halfway line. Neil McCann and Phil McGuire got involved as tempers were fuelled.Ā Referee McCurry yellow carded Driver before Scott Wilson launched the free kick into the Hearts box. Morrison lofted the defended ball back into the Hearts area but Banks came out to prevent Burchill taking control.

As half time approached it was quite clear that the Fifers had knocked the Edinburgh side off their stride.Ā Hearts were misplacing passes and getting caught in possession whilst Dunfermline were looking more confident by the minute. A 42nd minute free kick for Kingston`s rough challenge on O`Brien set up another free kick midway inside the Jambos half that Morrison sent in to Wilson`s feet but the captain for the day just couldn`t get a good connection on the chance.Ā

Burchill was then caught offside when it looked like he had sprung the trap and as play quickly switched to the opposite end Hearts were given a free kick in a central position just 25 yards out. Kingston`s shot was low and the ballĀ ricocheted out for a corner that the Pars survived before the half time whistle was blown.

Hearts were out waiting to kick off as Dunfermline arrived back late from the break and within 40 seconds Elliot had crossed from the left for Pospisal to rise and head on target but de Vries held easily.

The Pars then mounted an assault on the Hearts goal. A free kickĀ awarded when Kingston stopped McGuire set up another chance but Simmons and McGuire crashed into each other on the edge of the six yard box. Hammill however was given a chance from 40 yards out and his high looping shot severely tested Banks as the ball dipped in on his goaline.

The England U19 internationalist next produced two fine balls in from the left.Ā The first was defended out but he collected and almost found Stevie Crawford at the far post but the ball broke off the back Wallace, got tangled up asĀ Stevie tried to turn the ball inĀ and the Jambos survived.

The Cup holders responded and could have scored three in the space of three minutes.Ā McGuire had a fantastic headed clearance from Elliot, then de Vries pulled off a great save from Mikoliunas.Ā Hearts piled on the pressure and within seconds de Vries had to produce a wonder save to stop a Pospisal header from ten yards.

At the other end a Hammill free kick on the left side of the Hearts penalty area created danger but Wilson could not lose the attentions of Zaliukas and it was the Hearts defender who had the Jambos next chance.Ā A headed effort was wonderfully saved by de Vries - the Dutch keeper was certainly keeping all Dunfermline`s cup hopes alive!

Hammill fired a free kick narrowly over the crossbar and after Simmons had forced the second of two corners on the left Hearts almost got punished on the counterattack but Gary Mason chased back to the rescue. In 72nd minute Hammill`s driving playĀ created a brilliant chance for Crawford but the striker was just not close enough to convert.

Substitute Edgaras Jankauskas had an opportunity within minutes of coming on but his header was a great disappointment to the Edinburgh supporters who were growing increasingly frustrated.

An 82nd minute throw in on the right was flicked on by Hamilton and McIntyre to Hammill but his shot went well wide left. Given the Pars poor Tynecastle record it was worth pushing for the winner.Ā Owen Morrison came on for Jim O`Brien but not until after Bednar had chipped de Vries and seen his shot go over off the top of the crossbar.

The three added minutes saw efforts from Hammill and Hamilton but it looked like nothing could prevent the replay. That was until Marius Zaliukas was adjusted to have fouled Jim Hamilton. With ten seconds of the additional time remaining an Owen MorrisonĀ free kick on the far side was fed to Hammill who directed in one final cross.Ā It was met by Scott WILSON at the far post and from close in, he headed down and into the net.Ā The scenes of joy from the Dunfermline players and fans would have brought a tear to a glass eye.Ā The game resumed and immediately Mike McCurry blew for full time, cue more elation.

It had been a cracker of a cup tie and all references to a replay at Tynecastle on Wednesday 14th February had to be rapidly erased from many of the match reports sitting waiting to be posted. Well done and well deserved Dunfermline. Who`s next?