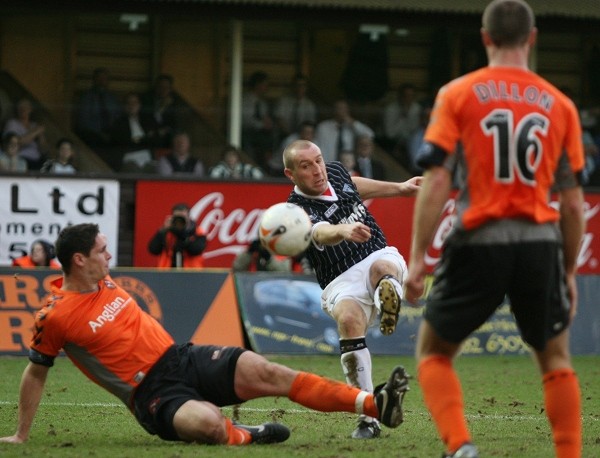 Sunshine greeted Dunfermline to Tannadice for the important SPL match against United but it was what happened after sunset that was going to matter.Ā Following the acquistion of Stephen Glass on loan from Hibs, the 30 year old was slotted in at left back and Scott Morrison dropped out. Stephen Simmons and Scott Muirhead were brought in to the team meaning Bobby Ryan and Greg Ross were relegated to the bench. Craig Levein had Noel Hunt, David McCracken and Stuart Duff back for the home side as they started 4-5-1.

The Pars kicked off attacking the goal at the east end but it The Arabs who had the first chance in the sixth minute.Ā A through ball from Jon Daly broke off Phil McGuire and Collin Samuel ran on to the ball taking it inside the box before firing on target but straight at de Vries and the keeper manage to block.

Next minute a Stuart Duff left footed volley from all of 25 yards was parried by de Vries on his line before he could hold it. There was a blow for the ParsĀ when skipper Greg Shields had to come off after just 12 minutes.Ā He was injured by Phil McGuire in a challenge on Jon Daly and had to be replaced by Greg Ross, Scott Wilson took over the armband.

de Vries made a really good save in 17th minute when a cross from the right travelled through the Pars box to allow the Trinidad and Tobago internationalist a good effort on target.Ā The visitors first chance came in 18 minutes when Simmons was on the end of a fine Glass free kick in from the right. However, under challenge from McCracken, Simmy tumbled to the deck as he went for the ball and a corner was all they could take from it.

United had the ball in the net on the half hour when Hunt beat Muirhead at the corner flag and lofted in a good delivery. de Vries failed to hold as Jon Daly headed down but the big Dubliner was penalised for his challenge. O`Brien swpt over a useful ball from the right touchline three minutes later and despite the attempts of Duff and McCracken to stop him, Hamilton turned to launch a shot from 12 yards but unfortunately over the crossbar.

de Vries had to be alert to another dangerous ball in just lifted into his penalty area by Hunt and the big Dutchman was quickly out to bravely deny Daly.Ā Scott Muirhead was substituted two minutes from the break after he sustained a knock, making way for Adam Hammill.

It was not the exciting first half that we were hoping for from Dunfermline but new man, Stephen Glass did look good, his deliveries from set pieces and from open play providing the kind of service the strikeforce is looking for.

The second half began with United again creating an early chance. Glass`s push on Samuel earned United a free kick on the right and when Duff swept the ball over McCracken headed over the crossbar from eight yards.Ā A loose pass back from Glass gave the home side their first corner of the match in 49 minutes and the ball was sent through the Pars box before eventually de Vries took cotrol of the ball.

A McGuire challenge on Daly had the home crowd looking for a penalty but that would have been the wrong decision. McCracken headed another effort that de Vries was not troubled with but Dunfermline were finding it hard to find a route of any sort through the home defence.

United`s corner in 57th minute was well held by de Vries undr his crossbar with Lee Wilkie only successful in bundling Hunt into the net. At the other end the Pars second corner of the day was taken over on the right by Glass and he came close, hitting the near post. Duff took the next corner and Daly headed narrowly over the bar from ten yards.

Midway through the half Hamilton switched the ball left for Hammill but Lee Wilkie intercepted the cross, conceding a corner on the left but the defence easily dealt with O`Brien`s inswinger. In 69th minute a short taken free kick let Glass turn the ball across the goalmouth.Ā Simmons got a touch but not enough and then Scott Wilson`s attempt ended up with Stillie.

The home support were on their feet in 73 minutes appealing for a penalty but it was their own sub, Craig Conway who sent Jon Daly sprawling in the box.Ā When Ross earned a yellow card five minutes later Kalvenes floted in the free ick from the left and United came extremely close to breaking the deadlock with a David Robertson header that was inches outside the right goalpost.

Injury to Stephen Simmons denied Stephen Kenny the chance to refresh his frontline.Ā Jamie McCunnie came on in midfield as the clock ran down.

Persistence by Sean Dillon on the left edge of the box set up Wilkie for a crack at goal from 20 yards but he was woefully wide to the right of target. The Fifers just couldn`t get into any position to win this game and the final whistle must have been a relief to the neutrals.

St Mirren lost 2-0 at home to Aberdeen so the gap between them and the Pars is now eight points.Ā Dunfermline`s eighth league match without a goal, equalling the club record from 1987-88.Ā Maybe next time we`ll get a goal!