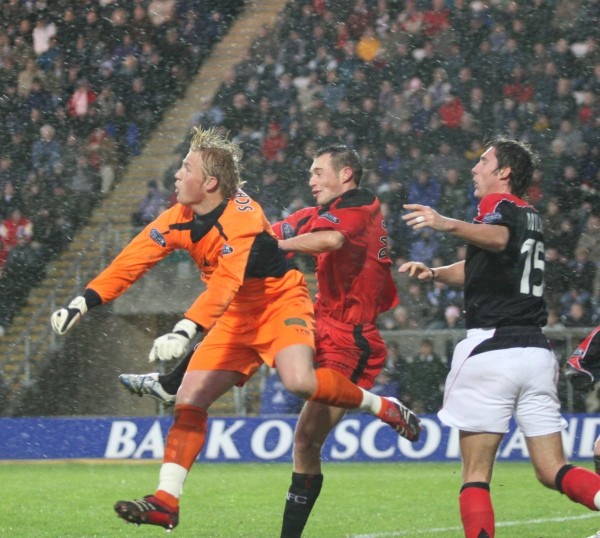 With his international clearance secured overnight, Bobby Ryan went straight into the team to make his debut for Dunfermline in this local derby against Falkirk. He replaced the suspended Jim Hamilton.

The 27-year-old winger completed a move from Shelbourne on Friday to re-unite Limerick-born Ryan was reunited with his former Bohemians boss Stephen Kenny at East End Park after the Pars club agreed a fee.

The other change from the successful side that knocked Rangers out of the Scottish Cup on Sunday was also enforced through suspension, Greg Shields returning to take the place of Phil McGuire.

Falkirk`s only change was the introduction ofĀ 20 year-oldĀ goalkeeper Kaspar Schmeichel on loan from Manchester City; the Dane with the famous father replaced Dutchman, Jeroen Lambers. It was the home side that kicked off playing into the rain and wind but the Pars were soon on the offensive with both Owen and Scott Morrison trying to feed the twin strike force of Crawford and O`Brien.

It was Owen who placed a 4th minute free kick on the head of Greg Shields for the first chance of the afternoon that the Pars skipper headed narrowly wide right. Dunfermline continued to benefit from the wind and pressed forward. O`Brien was next to try and beat the keeper, collecting a defended ball but shooting wide right.

Two Dunfermline corners demonstrated how difficult it was going to be to defend in the blustery conditions. In 15 minutes Owen Morrison lobbed in another free kick but Kaspar Schmeichel held easily.

The Bairns tried hard to work the ball into the Pars box but they had opposition from the wind as well as from the Fifers defence. High balls were just blown back towards the Falkirk half but despite conditions the home side did manage to peg the Pars back.

From the 21st free kick that earned Scott Morrison a yellow card, Latapy droveĀ a low difficult ball that was well stopped but it broke for Kenny Milne and you feared the worst from the fierce shot but Alan Gow got in the road on the net bound shot.Ā Two minutes later Shields headed another dangerous looking shot behind for a corner on the right.Ā Fortuntately that was to end up in the arms of McKenzie.

Dunfermline`s fourth corner of the game inĀ 32nd minute caused Schmeichel to fist away Scott Morrison`s tricky delivery but it was the Pars who were to have the greatest escape just seven minutes later.Ā Gow looked like shooting but it was Liam Craig who fired the ball across theĀ face of the goalĀ to be deflected for a corner.

A fine move in 42 minutes from O`Brien to Young fed Crawford but that was blocked out and then in the second minute of added time Crawford was again through but the Danish keeper was well out to save Stevie`s shot with his legs.Ā A great chance and a great stop from the keeper.

A blow for the Pars was the calf injury to Scott Wilson that saw him limp off after 42 minutes and into the doubtful for next week category.Ā His departure meant Jamie McCunnie returned for his first game sinceĀ being injured at Tynecastle on 28thĀ October.Ā Darren Young went to centre half and the sub assumed a central midfield role.

The half time music suggested that "we ain`t seen nothing yet" and as Dunfermline kicked off into the driving rain everyone was hoping that the conditions were not going to be the only winner.Ā Freddie Daquin came on for Owen Morrison as the Pars restarted.

Falkirk were greatly assisted by the wind in 51 minutes with Craig running on to a through ball that Roddy McKenzie took sliding on his side to collect. Next Cregg and Latapy exchanged passes down the right.Ā Cregg made ground into the Pars box before cutting back for Latapy to send a shot into theĀ hands of McKenzie.

Just as Falkirk had done remarkably well when playing into the wind, the Fifers were able to take the game deep into the opposition half.Ā Falkirk`s 64th minute free kick sent the ball invitingly through the Pars penalty box but Craig was penalised for pushing Ross.

At the other end Scott Morrison`s corner was again punched away by Schmeichel and play was quickly back in front of McKenzie.Ā Cregg and Gow combined well and Gow was in on the left side but his pass was overstruck and Falkirk failed to get a shot in. Young did really well to fend off gow in 70th minute and then McKenzie was down bravely to take Latapy`s cross in from the right.

Stephen Simmons had a good chance just 12 minutes from time when Ross`s delivery was teed up off Crawford but the effort hit the right goalpost.Ā Liam Craig then beat two men and threatened to hurt the visitors.Ā Had he chosen to let Latapy shoot, it might have but he chose to shoot from the edge of the box and the attempt was well wide right.

In 88 minutes Latapy put through Lima forcing another fine save out of McKenzie.Ā The Pars finished the game pressing Falkirk but at no time did they give the on loan keeper a chance to show his quality.

Just when it looked like a point had been bagged, right on 90 minutes Craig picked out Alan GOW on the left side of the Pars box and the much sought after striker slotted the ball in at an angle under Roddy McKenzie.Ā There were apppeals for offside but that made no difference.Ā For the 1190 Pars fans behind the goal it was sheer disaster and many immediately headed for the exits.

Another game without a goal from the Pars, their sixth in succession in the SPL and still stuck well adrift in twelfth place.