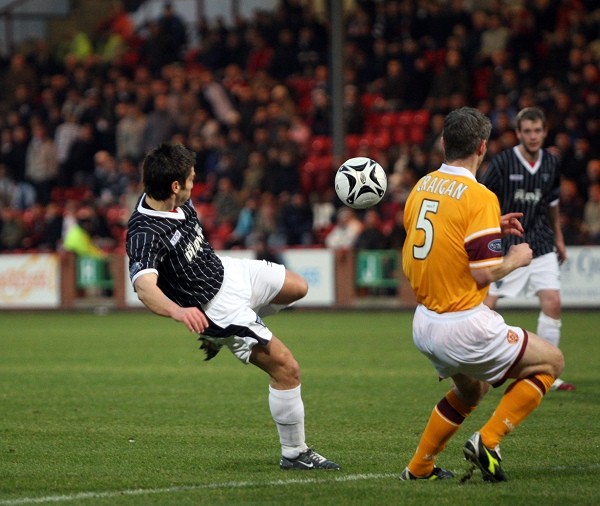 Without the suspended Stevie Crawford Dunfermline welcomed back Mark Burchill. Freddie Daquin was preferred to Greg Ross in the only other change made by Stephen Kenny. Motherwell too, had men out suspended. Jim Paterson and David Clarkson were not available so Paul Quinn came into the starting line up in an otherwise unchanged team from the one that took three points at Rugby Park three days before.

Gary Mason and Jim Hamilton kicked off for the home side attacking the goal in front of the empty East Stand. After just 40 seconds a Sol Bamba shot high into that stand bringing cheers from the home support and those were even greater in the third minute when Scott Muirhead`s break down the left led to a cross that Freddie Daquin directed on target from an acute angleĀ on the right only to be stopped by the feet of Motherwell keeper Graeme Smith.

Daquin rounded Quinn in 11th minute and centred a good ball into the Well six yard box but with no takers. Bamba gathered the clearance however and laced the ball left for Mason to run on to in the left side of the opposition penalty box.Ā His delivery was destined for Greg Shields head until a Motherwell head intercepted.Ā The follow up came from Burchill and his effort from 20 yards rattled the crossbar.Ā No goal but East End Park roared like it had never before this season.

Just four minutes later in 16 minutes, Phil McGuire got a glancng header onto a corner from the left but Martyn Corrigan blocked and Jim Hamilton popped a shot but was off target.Ā It was looking rosy for the Pars and even when Marc Fitzpatrick threatened to walk through the centre of the Fifers defence a strong tackle from Scott Wilson set up Darren Young to break and then feed Scott Muirhead.Ā Graeme Smith had to dive bravely at the feet of Burchill as Muirhead drove a low ball into the six yard area.

Mark Burchill was yellow carded for apparently telling referee Mike Ritchie for protesting too much for not receiving a penalty decision in 25th minute when theball appeared to come off Darren Smith`s hand. Then completely against the run of play Motherwell took the lead. Only one long range shot from on loan striker Callum Elliott had been anywhere near de Vries` goal untilĀ in a simple move Quinn placed the ball at the feet of Marc FITZPATRICK and he slipped the ball past de Vries from the left side of the box just ten yards out.

Even more almost went wrong three minutes later but when Smith was clean through de Vries came out to pull off a fine save. The home supporters euphoria of the opening twenty minutes began to subside as the effects of their pre match tipples wore off in tandem with the pressure from the Pars attack.

Mark Burchill restored the hopes with a 35th minute shot that narrowly cleared the crossbar and landed on the roof of the net. Not much came the Pars way again until the final minute of the half when a neat forward pass from Bamba put Shields in on the right side of the box but his well cut back cross was easily defended.

Owen Morrison made way for Freddie Daquin just before the interval as the Frenchman limped off with what looked like a hamstring problem.

The home fans were back off their seats after only 85 seconds of the second half as Burchill`s advances into the `Well penalty box produced a low shot that seem directed to slip in bottom left but instead the ball trundled agonisingly wide of the left goalpost.

In 51st minute Young swung in a useful ball from the left but Jim Hamilton headed wide left from ten yards out.Ā Next Morrison put Bamba up the right and the big man delivered with a great cross that put the defence under pressure. Muirhead cut back for BurchillĀ but with the Dunfermline fans roaring in anticipation could only win a corner.

After 58 minutes aĀ Fitzpatrick belter atĀ Motherwell`s firstĀ corner of the afternoon was deflected wide off the boot of McGuire and Dunfermline`s defence continued to hold firmĀ as theirĀ opponents fell foul of the offside trap. The Pars should have got the equaliser in 64 minutes when a Mason free kick from the left touchline was headed back into the six yard box by Wilson but Scott Muirhead failed to direct his shot on target and so the Steelmen survived.

Five minutes later Greg Ross came on for Bamba, Morrison switched to the left midfield, Muirhead dropped back and Young was pushed up into midfield. A Foran challenge on Mason earned him a yellow card and then Wilson and McGuire quickly saw yellow as well as they took out their growing frustrations on the Motherwell players.

With tensions running high, the visitors did their talking with their feet and in 79 minutes increased their lead as Foran played Scott McDONALD down the left wing.Ā The Aussie cut into the box and evaded the attempts by both Shields and McGuire to prevent him slotting the ball past de Vries from 15 yards.

Any hope of a Pars recovery went out the window with the red carding of Jim Hamilton ten minutes from time for elbowing Stephen Craigan on the edge of the Motherwell penalty box.Ā de Vries saved another fromĀ McDonald in 88 minutes but the game petered out with no sign of Dunfermline scoring.

Yet another match with plenty of effort but nothing at all to show for it.Ā Athletic paid dearly for not taking their first half chances and lost the game for the simple reason that they just couldn`t score. That is now 290 SPL minutes without scoring.