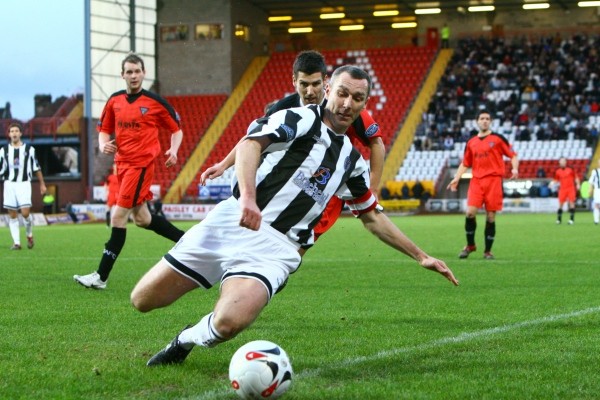 Dunfermline had Phil McGuire, Darren Young and Mark Burchill back to take the places of Aaron Labonte, Scott Morrison and Freddie Daquin.Ā St Mirren madeĀ three changes as wellĀ meaning they were without John Sutton and Garry Brady and veteran Andy Millen only made the bench.

Every one of the Dunfermline players applauded theĀ travelling supportĀ as they came out and after Greg Shields returned from the toss up, the side went into a pre kick off huddle.Ā The home sideĀ kicked off at St Mirren Park attacking the goal at the away end and it was them who pushed up more in the opening ten minutes.Ā With McGuire in the centre of the defence alongside Scott Wilson there was nothing to trouble Dorus de Vries and the linesman`s offside decisions certainly reduced the danger.

It was 12th minute before there was any serious threat to the scoreline and it was Dunfermline who almost did it.Ā Stephen Simmons accepted the ball from a throw in on the right midway inside their opponents half, turned Richard Brittain and then stepped inside Simon Lappin before unleashing a low drive that Bullock spilled at the feet of Scott Muirhead but he failed to turn the ball in from six yards.

After Darren Young at left back found it hard to keep his feet he was dispossessed by Mark Corcoran and when Wilson stopped him Saints were awarded a free kick 35 yards out.Ā Fortunately 19th minute setpiece was sent over the crossbar by Kirk Broadfoot.

Three minutes later the home side came very close with Alex Burke hitting the base of de Vries` left hand post after Reid had played in Corcoran and then he in turn evaded McGuire`s challenge to tee up the 15 yard shot for the former Kilmarnock striker. The Pars headed over from a Muirhead corner from the right but were then put under the cosh by Gus Macpherson`s side.

A shot was well blocked from a St Mirren corner from the right but then in 28 minutes a goal looked a certainty when Lappin got in on the left side but somehow Muirhead did enough to prevent van Zanten from turning the ball in from inside the six yard box. Next de Vries under pressure from Broadfoot, dropped a Lapin free kick on the top of his six yard box, the loose ball was scrambled away and had Burke got to it he would have been offside.

Mark Burchill took some pressure of his own defence chipping a Muirhead free kick back through the penalty box but there was not a Pars player there to take advantage. As half time approached play got progressively bogged down in the Pars half. Bullock`s poor handling gifted Dunfermline a corner but Shields was forced to head wide right. de Vries held a deflected effort from Reid as Saints yet again looked like the more likely to score.

The rain was pelting down in the closing minutes and both teams were happy to get off the park. If the much sought after change in Dunfermline`s SPL fortunes was going to change then things were going to have to be much more positive in the second half.Ā Mark Burchill would be missing from that though as he limped off to be replaced by Jim Hamilton in the second minute of added time.

Hammy and Craw kicked off the second half but the Fifers soon found themselves breaking down St Mirren`s progress into their half.Ā Dunfermline were finding it hard to be creative but then Greg Ross produced a 50th minute cross from the right was headed on by Hamilton and Crawford from six yards scooped the ball on to the roof of the net.

Four minutes later, Billy Mehmet was next to attempt to break the deadlock severely testing de Vries from a Corcoran cut back from the right byeline.Ā The big Dutchmen did really well to hold in the extremely wet conditions.

St Mirren continued to be more threatening as the half went on and it was the visiting defence that was the busier. John Potter despatched a Reid corner wide right and even when Wilson pumped a free kick into the Saints box the defences`s clearance merely set up Corcoran for a sprint up the left, the pace of which Shields struggled to cover. Fortunately Wilson was back to slide in and stifle the attack.

Dunfermline chances were few and in 70th minute a back pass gave themĀ a goodĀ chance but Bullock got away the ball before Ross could catch him out. Two Pars corners in the next minute raised the hopes of an away win.Ā Firstly Hamilton`s header was cleared away and then from the resulting corner Shields almost scored although it looked more like his back that the ball broke off. Saints survived but so too did Dunfermline after a free kick, that earned McGuire a booking,Ā was floated over from the left.

The game could still have gone either way and in 82nd minute Hamilton came close heading a Ross cross narrowly over the bar. A 87th minute Simmons corner from the left was all too easily headed clearĀ but then two more corners came and went as the travelling support behind the goal egged their side on.

No late drama however even after Muirhead was deep down the left to thread a nice ball in for Crawford but the defence were in first.Ā Simmons tested Bullock with another fine shot from distance but it was all to end goalless.Ā Kenny`s team looked much more physical and fitter, more determined and more together but somewhere they are going to find some invention.