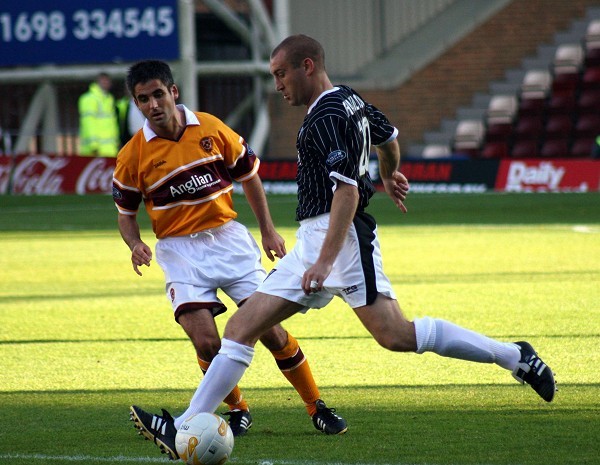 Motherwell impressed with their 5-0 trouncing of Kilmarnock last time out. Maybe that was a good sign since how many times in the past have Dunfermline faced a team seeking their first win since who knows when, and then done their opponents a good turn by letting them break their duck. Not unexpectedly Maurice Malpas started with the same eleven while Jim Leishman made four changes.


In the absence of Dorus de Vries, Roddy McKenzie was back between the sticks after a break of seven matches. Freddie Daquin, Aaron Labonte and Scott Muirhead came into the side with Owen Morrison out injured. Greg Ross and Souleymane Bamba were relegated to the bench.


It was the sixth minute before the visitors succeeded in getting the ball into the home penalty box. Jim Hamilton`s early delivery sending Muirhead scuppering down the left to perfectly flight a cross in that unfortunately did not have such a perfect finish. Daquin took the ball out of defence and he too went on a long run down his side of the park but Jim Paterson ended the foray 18 yards out.


The first real chance for either side was carved out by Scott McDonald in 12 minutes. Leaving Shields in his wake he created room to shoot from the edge of the area and the ball went inches wide of the right post. Next a Craigan cross evaded Foran as he rose on the far side before the Pars won their first, but fruitless, corner of the game.


Labonte looked as though he had cleverly intercepted a pass to Calum Elliot but the Well man forced him square and was awarded a soft free kick as he squeezed between Labonte and Wilson. Brian Kerr sent the 19th minute effort high over the crossbar from 20 yards out.


The match was lacking goalmouth incidents and the next McKenzie saw of action was to peel a McDonald cross off the head of Steven McGarry at the edge of his own six yard box. Motherwell turned up the pressure and on the half hour Mark Reynolds caused Woods to clear off his line when Kerr`s corner from the left was dropped by McKenzie under pressure from Craigan and Elliot was presented with a great chance.


It continued to go the Steelmen`s way with Shields booting away a Foran shot only to see the Irishman return a fine ball that Elliot headed over the bar. Foran tried a longer range shot from the left side but McKenzie was right in line to hold with ease. The Pars keeper then had a good diving save from Elliot after McDonald had released a neat ball to send him in on the right side of the box. Elliot again and Paterson were to get in shots before referee Dougie McDonald blew the half time whistle.


The game restarted with Dunfermline still in search of their first away goal of the season but unfortunately `Well picked up from where they left off. Some of the home support thought that Scott McDonald had hit the net in 47 minutes with a powered effort from the right side 18 yards out but it was thankfully the outside of the sidenetting that bulged. Two minutes later he did succeed but an offside flag had been raised.


Daquin had a good attempt from a Muirhead corner five minutes into the second half but the home defence came out on top to clear comfortably. Sol Bamba replaced Scott Wilson who was clearly in some discomfort through injury and play continued to be controlled by the home team.Â


On the hour they got the goal that you had to feel was coming for some time but somewhat controversially. A Jim Paterson corner from the right caused McKenzie to pull off a good save turning the ball round his right hand post with some assistance. The ball came close to crossing the line but maybe not fully so Reynolds sent it back in for Scott McDONALD to cream home as the Pars defence appeared to freeze. The Assistant Referee was on the far side and possibly could not see the position of the ball; the goal stood.


Foran had the ball in the net three minutes later but this time the linesman ruled in the Pars favour adjudging him to be in an offside position as the ball pinged about the Pars box.


Then after 639 minutes of away football this season Dunfermline struck back. A nice passing movement, keeping the ball on the deck from Daquin to Hamilton played Stevie CRAWFORD through to
drive the ball into the bottom right of the Motherwell goal. All square with twenty minutes remaining.


For the first time in the match the Fifers tails were up and they were unlucky as Hamilton turned his chance into the hands of keeper Colin Meldrum and then Bamba found himself free to pop a shot from 30 yards out that fell the wrong side of the right post.


As the match slipped into the final ten minutes, two Dunfermline corners brought the travelling support to their feet but Meldrum`s goal was barely threatened. Just when things were looking more promising for Leishman`s troops it all went badly wrong. Substitute David CLARKSON latched on to a through ball and turned Greg Shields on the edge of the box before firing passed McKenzie into the bottom right.


Keith Lasley looked like he might have got a third in the 90th minute but McKenzie pulled off a great save but even after the two added minutes the three points were all left in Lanarkshire and Dunfermline sink to 11th place saved from worse only by the inferior goal difference of Craig Brewster`s Dundee United.