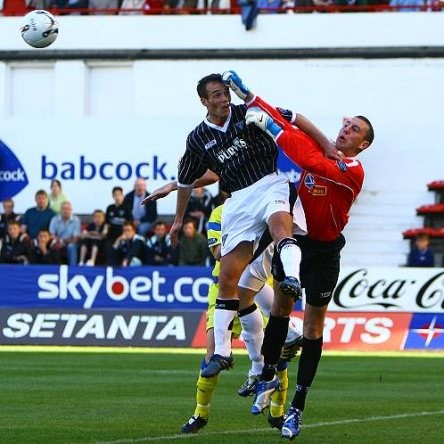 Dunfermline were afforded the luxury of four unforced changes from the side that faced Aberdeen two weeks ago. Out went Greg Ross, Souleymane Bamba, Jamie McCunnie and Andy Tod to make way for Stephen Simmons, Calum Woods, Stevie Crawford and Jim Hamilton. Kilmarnock brought in David Fernandez and Gary Wales in place of Colin Nish and Peter Leven.

Bright sunshine greeted Stevie Crawford back to East End Park as Kilmarnock kicked off attacking the Norrie McCathie Stand end. The opening play seemed to be all in the direction of De Vries with an early corner raising appeals for a Killie penalty as Aaron Labonte took the ball away. Dunfermline did force a corner but the optimism of the home support was soon to be deflated.

With just under ten minutes gone an Allan Johnson pass to the top of the Pars penalty box picked out Danny INVINCIBLE who drilled the ball past De Vries to net into the far left of the goal.

Kilmarnock carved out another good chance with Grant Murray racing down the right in 17th minute to cut back an inviting pass that slipped through the penalty box without a Kilmarnock touch. Dunfermline were finding it difficult to get a grip of the game with the visitors quite comfortable to break down anything coming their way.

A 24th minute driving run from Labonte was the most positive play so far from the Pars but after beating two players his lay off to Crawford was fired too powerfully across the Kilmarnock box and the chance was gone. Four minutes later Morrison made ground down the left and then cut into the penalty box before trying to pick out Darren Young. His captain could only feed the ball back to Gary Mason who drove a strong effort narrowly over the crossbar from 23 yards out.

The Fifers kept up the pressure with a 35 yard free kick chipped into a dangerous area by Morrison but Simmons` challenge was brushed aside and when the ball came back out Calum Woods tried to launch a shot on goal from distance but the defence was quickly out to block.

At the other end a Garry Hay cross was headed down by David Fernandez, a corner resulted but again De Vries held easily. Play was quickly back at the Killie end with an Owen Morrison cross being headed at Graeme Smith by Simmons. A late McGuire tackle on Naismith 22 yards out handed Killie another good opportunity but Gary Wales swung the ball over the five man wall and the Dunfermline crossbar.

Scott Wilson neatly headed away a fine Naismith cross from the left but with the next attack Dunfermline got the equaliser they badly needed. Morrison who had enjoyed space on the left created the chance, gaining ground before flighting a ball to the far side of the Killie six yard box. Stephen Simmons rose to head the ball beyond the red shirted keeper and Darren YOUNG ran in at the far post to convert.

Minutes later the Pars captain was presented with another good chance after Labonte had cut a nice pass into the D at the top of the box but the shot went wide left.

Crawford and Young restarted the game with Dunfermline replacing Calum Woods with Greg Ross. An early chance came Crawford`s way as he raced on to a through ball but Graeme Smith was quickly out to blast a clearance which broke fortunately for him off one of his own defenders.

A fine individual effort from Gary WALES in the seventh minute of the half put Kilmarnock back into the lead. Displaying fine skills the Killie no.10 sent Scott Wilson the wrong way to round him and hammer home into the bottom right from 22 yards out.

Wilson denied Naismith with next attack sustaining an injury in his challenge that earned the Killie man a yellow card. The management decided a change was needed and Freddie Daquin came on for Stephen Simmons.

Immediately the right side was deployed and a chance broke to Crawford that had the McCathie Stand rising to their feet but Smith got across his goal to catch the shot that was deflected off one of his defenders.

Pars corners ensued and the home support began to be a force although Labonte had to be at his very best to take the ball off Invincible after he fed off Fernandez to break on goal. Daquin dispossessed Hay to go on a run up the right but he ran out of space. Hamilton won a corner and Morrison`s delivery was thrashed at goal by Daquin but the defence blocked.

The 73rd minute brought the much sought after equaliser when Owen Morrison popped up on the right to send over a testing ball to the far post. Two Dunfermline went for it and the ball broke kindly to Gary MASON who slotted home from six yards. Jim Jeffries replaced Fernandez with former Par Colin Nish and with ten minutes remaining and Young was back in a defensive role to stop Wales` run on goal. At 2-2 the game was still wide open but the dream was to be lived out. With 84 minutes on the clock in his return debut Stevie CRAWFORD cemented his adoration in the hearts of the East End faithful. Collecting the ball on the left wing he rounded both Gordon Greer and Grant Murray before sticking a right footed finish under Smith from eight yards. What a match twice behind and then finding a road to victory. The legend that was Stevie Crawford returned to the present tense in dramatic fashion and the home fans will take much more of this.