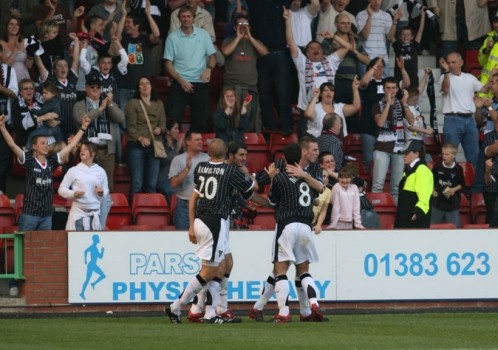 For the first St Mirren visit to East End Park in five years Dunfermline made four changes from the team knocked out of the CIS Insurance Cup in midweek. Stevie Crawford returns along with Calum Woods, Greg Ross and Owen Morrison. Freddie Daquin, Aaron Labonte and Phil McGuire were injured and Stephen Simmons found himself on the bench.

St Mirren in their red away strip, kicked off playing towards the McCathie Stand end and they controlled much of the opening minutes. The opposition fans made loud appeals when Bamba`s tackle on Kean upended their striker on the edge of the box but the referee Craig Mackay saw nothing illegal in the challenge.

The whistler saw nothing wrong either at the other end after Morrison picked out Darren Young and he in turn threaded the ball into the penalty box for Stevie Crawford to try a shot at goal. Craw`s protestations that the block had been made by a St Mirren hand made no difference to Mackay`s judgement.

The next minute as play switched to the other end Souleymane Bamba and Greg Shields failed to clear a fairly harmless looking ball on the top of their penalty area and John SUTTON stepped in to fire a low shot into the bottom right of the Pars net. The early set back did not spring an immediate reaction from the Fifers. It was another six minutes before Young`s break found Morrison and his cross was headed weakly down for Tony Bullock to collect as he adjusted his position to his right. Bamba picked out Ross deep right and the Pars man did well to evade the defenders on the right side of the box before centring a good ball to the feet of Jim Hamilton 15 yards out but his touch was not good enough to control the ball for a shot and the Paisley men scrambled the ball away.

There were jeers from the home support as the Pars seemed afraid to venture forward and even time to admired the turning leaves on the trees in the cemetery, glowing in the bright September sunshine. A 26th minute tackle by Scott Wilson on Stewart Kean gave Kirk Broadfoot a chance to fire in from a free kick 30 yards out in a central position but he was wide of the mark.

Further boos from the home support were stifled five minutes later when Crawford fed Morrison on the left but the Irishman`s ball into the box was behind Craw and despite the passback to the keeper putting Bullock under pressure the Pars striker could not get in for the kill. Dunfermline began to enjoy more possession but the creativeness was missing and the East End faithful were beginning to vent their displeasure.

David Van Zanten got around two men on the right to despatch a speculative ball into the six yard box causing de Vries to take out the cross. A Simon Lappin free kick from the left in 40th minute was not cleanly defended and Sutton got in a shot that he looped high over the crossbar.

The jeers and whistles at the half time whistle reflected it was a disappointing first half from Jim Leishman`s side and one had to hope that the gaffer had some words of wisdom to dispense at half time.

Mason and Crawford got the second half underway and memories of the awful first half were quickly erased as Darren YOUNG sent the ball out right and then met Jim Hamilton`s return to hammer home from the right of centre 20 yards out. Twelve seconds from the kick off!

The explosive start continued with two great chances for Stevie Crawford. The first in 49th minute he shot wide right from 8 yards after he had sent Morrison into the left side of the Saints box and then met the return. Next minute Crawford blasted a Hamilton knock on high over the crossbar.

Not to be outdone Hamilton then had a headed chance blocked from a corner and next he sent a screamer of a shot across the face of goal. The home support were in full song and suddenly from the despair of half time there was vociferous backing for homesters. A 56th minute free kick was whipped in by Owen Morrison but neither Bamba or Young could get a connection.

The defence had to be alert too as Sutton`s lay off to Garry Brady ended up with the ball rocketing past de Vries` left hand post. Before the hour Scott Wilson had to go off and with Scott Muirhead being the substitute, Greg Shields linked up with Bamba in the centre of defence, Greg Ross dropped back to full back and Owen Morrison went to the right side of midfield.

Dunfermline continued to press with Crawford`s dink of a header not smart enough to fool Bullock and then Hamilton heading wide right. At the other end Van Zanten forced de Vries to save but a 69th minute free kick again raised the temperature of the match. After a lengthy deliberation over what to do at the setpiece 30 yards out, the six players dispersed to leave Mason to touch the ball to Hamilton who withdrew from his anticipated shot to switch the right for Ross to send into the six yard box. The defence were not to be fooled and cleared but the fans erupted as Bamba and Broadfoot tussled in the six yard box. It is debatable just how much big Bamba understood of the lengthy talking to but it was maybe a relief that the colour of the card was yellow after pushing the St Mirren player in the face.

The turnaround was complete when CRAWFORD was gifted a chance in 74 minutes and he made no mistake taking the ball in to just eight yards out before sending his right footed finish past Bullock. The fans favourite had to thank Owen Morrison for creating the supply since it was the man that St Mirren rejected pre season, who forced David Van Zanten into throwing it straight to the Pars hitman.

Calum Woods powered in a shot that the St Mirren defender knew little about and Andy Tod entered the fray replacing Hamilton and almost getting a result with his first touch as he headed the ball out of the keeper`s hands.

It was nail-biting to the end however with Greg Shields being yellow carded in the fourth added minute and keeper Tony Bullock going up for the final, unsuccessful, fling.

After one of the worst halves of the season what a transformation the second one was. It was a great team effort in the end but they must have changed all eleven at half time. Of course Stevie Crawford was yet again the Man of the Match and there was no time to watch the cemetery in the second 45. There will be plenty there who would wish that they could have witnessed this tremendous comeback.