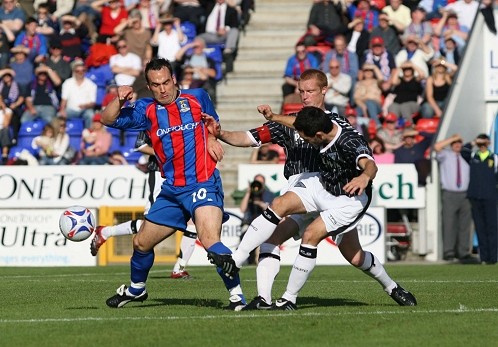 Sunshine welcomed Dunfermline Athletic and their far travelled fans to perfectly prepared Tulloch Caledonian Stadium on the south side of the Kessock Bridge. Jim Leishman went with the same eleven that started (well at least in the second half) of the match against St Mirren the previous Saturday.

Inverness brought in Richie Hart for Ian Black as they made one change as they sought their first SPL home win of the season.


Crawford and Mason got the match underway and the same routine that created the opening Pars goal after just 13 seconds of the second half against St Mirren was tried. Darren Young touched it back to Greg Shields, Jim Hamilton headed square for Young but he was closed down and ball was pushed through for Greg Ross to cross into the six yard box. Darren Dods headed behind and the visitors had at least won a corner within the first twenty seconds.

Owen Morrison`s delivery was cleared but Young sent the ball wide right again and the Irishman sent a left footed ball over that Ross hammered wide from the edge of the box.

Caley worked their way into the game and had three good chances in 6th minute. Scott Wilson closed down Graham Bayne 15 yards out but the ball broke kindly for Craig Dargo to drive in an effort from 23 yards. That was successfully blocked but then Richie Hart powered in another shot that seemed to surprise de Vries and the Pars were relieved to see the ball rebound off the Dutchman`s chest for a corner. When that came in from the left Dods was able to get in a shot at the far side of the six yard box but thankfully he was well wide of target.

Dods caused his own defence some difficulty with Morrison`s next corner this time from the left but his defence cleared after Hamilton was allowed to send the ball into the danger area. Played switched fast to the other end with Dargo testing de Vries again in 16th minute.


At the midway stage of the first half Inverness were awarded a free kick given against Scott Wilson for his challenge on Dargo. Barry Wilson touched the ball to Hart who tried to convert from 35 yards but his attempt ended up nearer the corner flag than the goals. Next Darren Young took advantage of a spill on the right side to break away and try a long range effort at the target but Dods blocked the shot possibly using a hand in the process.

Roy McBain kept de Vries in the match forcing a save out of him in 27th minute before two Pars corners from the right came to nothing as Morrison failed to place the ball into any of the preferred areas. The visitors lived dangerously as they allowed Grant Munro to break through on the right and feed the ball to John Rankin. Fortunately for the Pars his final ball to Dargo was too strong and de Vries was able to gather at his ease.


Caley continued to fail in the final third with Ross Tokely firing well wide when he was set up from Dargo`s move through Barry Wilson. Bamba had a header back to de Vries that put the heart in the mouth for a second and next he read well Hart`s backheeler to clear. Bayne shot wide from a good position in 39 minutes before Dunfermline forced the first real save that Caley stopper Mark Brown had to make.

Young sent over a ball from the right that Crawford played back into the path of Ross but his effort in this pinball move went straight to Brown. de Vries was kept involved with McBain popping in yet another shot from outside the box and the Highlanders finished the half with the best attempt so far with Graham Bayne narrowly sending Hart`s cross to the outside of the left goalpost.

The fans hoped that the news that Motherwell were three up against Kilmarnock at half time might make the second half a bit more competitive. Five minutes after the restart Crawford took the ball deep into the right of the Caley penalty box but his cutback had no takers.

Morrison`s hustling in 53rd minute allowed Crawford to accept a shooting chance but his shot from the edge of the box on the right side went high and left. Three minutes later Wilson`s cross from the right teed up Tokely but de Vries dropping to his right, held the shot.

Scott Muirhead came on for Morrison and very quickly carried out the wish of the bench shooting a powerful strike on target but unfortunately beaten away. Freddie Daquin followed on in 65 minutes to replace Greg Ross.

Inverness tried to change things too with Rory McAllister going on for Dargo and the sub raised appeals for penalty for Scott Wilson`s 71st minute brush with him but it would have been a fairly weak decision. Andy Tod who had replaced Hamilton in 74 minutes soon had a chance to head at goal. Shields short ball to Daquin was taken around the defender and sent into the centre of the Caley Thistle but only a corner was the outcome.

Inverness sub McAllister blasted a chance over de Vries`s crossbar as the game tried to step up a gear with both sets of fans unhappy to settle for a draw.

Ross Tokely`s push on Andy Tod gave the Pars an opportunity from a free kick wide left midway inside the Caley Thistle half. Souleymane Bamba and Scott Wilson both went up for the setpiece but when Muirhead`s delivery was headed clear this set up Rankin for the break. Calum Woods dithered on the clearance as he faced his own goal and the Caley player was through on goal. A big let off thankfully though as the shot was sent wide left.

The Fifers were forced to defend doggedly as Caley and their crowd rallied. de Vries looked to have saved the day with a tremendous save from Bayne but with 90 minutes on the clock a corner on the left looked safely defended until Ross TOKELY drove low into the bottom left of the Pars goal. There was a deflection off Muirhead from the shot to make it a slippery and sickening winner.

This was a match devoid of style and flair but that`s nine matches now against Caley Thistle and no wins. Really disappointing for the Pars to lose in such a fashion but the soon they learn to score away from home the better.