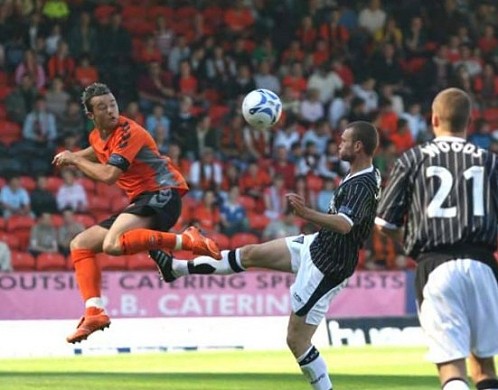 Dundee United kicked off towards the sparsely populated Shed end and forced a corner on the right after only 40 seconds when Souleymane Bamba blocked out Collin Samuel`s cross. When Barry Robson sent over an inswinger Roddy McKenzie`s first involvement was an easy clutch in the centre of his area.

In 6th minute Stephen Simmons and Alan Archibald clashed. Referee Mike Tumilty immediately stopped play, Simmons lay face down and required treatment while the United player went off to be stitched up. Both teams were temporarily down to ten men as Simmons too went off to receive a stitch as well.

Two minutes later a Robson free kick slipped through the Dunfermline defence causing McKenzie to save a Samuel effort from 7 yards. Simmons and Archibald returned on 13 minutes when Scott Wilson received a yellow card when Noel Hunt fell over the defenders outstretched leg. From the free kick Christian Kalvenes was allowed a volley on the right side but fortunately the defence shut out his attempt from 8 yards.

Things had been favouring United but in 18th minute Dunfermline were awarded a penalty as Archibald got the finest of touches on Mark Burchill as he went away from goal on the right side of the United penalty box. Burchy pick himself and the ball up and took the spot kick. Derek Stillie went to his right, the ball went to his left but broke out off the outside of the right post.

Simmons had to leave the field as it was clear his earlier injury was affecting him so Darren Young came on for his frst involvement at any level in the 2006-07 season. It was Bamba to the rescue though as Roddy McKenzie`s punch on a looping Barry Robson header went back towards goal but the long black legs were there to blast the ball clear.

Bamba was on the ball sending an overhead kick from 14 yards over the crossbar at Dunfermline`s first corner of the match in 31st minute. At the other end a Wilson slip let in Samuel to cut back from the left and well placed, Stuart Duff blasted his 20 yard shot high and left.

In 38th minute both Darren Young and Phil McGuire were yellow carded, Young for dissent and McGuire for his challenge. An injury to Scott Muirhead meant Aaron Labonte came on as sub and the Pars injury worries continued to grow. In time added on at the end of the half there were United appeals for a penalty as both their attackers tumbled as the ball came into the box.

The second half was six minutes old before any goalmouth incident and when Duff advanced down the right to flash the ball low into the six yard box McKenzie was down well to save. Play continued around McKenzie with having to block out a Hunt effort from close in and then Scott Wilson putting in a tremendous tackle three yards out to deny Kalvenes of a certainty in 54th minute.

Labonte headed away a Duff free kick and then had to concede a corner when Samuel tried to round him. The home support rallied and their mood certainly expectant but the Pars held out resolutely. Wilson deflected a Mark Kerr shot for a 59th minute corner that Robson took short and fired high and left.

The 63rd minute brought the Pars first effort of the second half when Young was on the end of a McCunnie sweep into the far left of the box but Stillie had an easy job to gather the header. Further worries came when Mason brought down Hunt on the edge of the Pars penalty box but Robson`s lofty ball into the danger area was too big and Dunfermline could move up the park again.

The Pars had successfully taken the sting out of United`s second half push. Bamba had a run right into the opposition penalty box that Stillie stopped and Burchill and Mason fed in crosses that unfortunately the defence won. Mason`s 76th minute clearance was latched on to by Burchill and he drove a shot wide from the edge of the box.

Six minutes from time Stillie clutched a Burchill cross from deep left as McCunnie closed in at the far post. United through on two subs with Duff an Cameron being replaced by Robb and Conway. An 88th minute free kick for Young`s challenge on Samuel almost snatched the winner but Roddy McKenzie was well over to spectacularly tip Barry Robson`s 30 yarder round his post. Robb excited the home support beating two players on the left and flashing a shot through the Pars six yard box. No score at the end and probably a fair outcome.

There was a fine performance from the Fifers defence with McGuire again a star; Darren Young`s arrival in midfield certainly gave them more options but the inability to create chances in addition to the woodwork prevented any more than one point from this visit to Dundee.