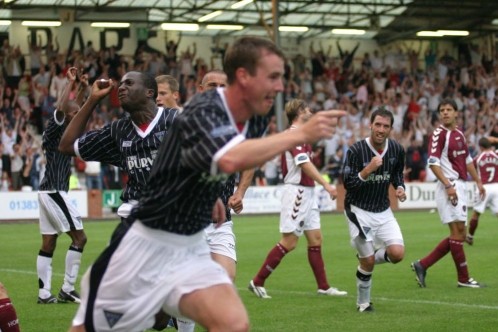 Dunfermline kicked off the new season against Scottish Cup holders, Hearts, a team that had tremendous success last term culminating in qualification for the Champions League. The first fixture could not have been much stiffer then but there was new hope for the Fifers given that they start the campaign with the most changed side in the SPL.

Muirhead for Campbell was the only change from the side that faced West Brom in midweek meaning last season`s top scorer Mark Burchill was on the bench. Only four of the team that started against Inverness Caley Thistle in the final match of last season were in the starting line up.

Hearts made four changes from the team that won their Champions League match 3-0 at Murrayfield on Wednesday. Fyssas, Pospisal, Mikoliunas and Brellier came in for Petras, Cesnauskis, Tall and Jankauskas.

Stephen Simmonds and Freddie Daquin took the kick off attacking the Cowdenbeath end and on 60 seconds Daquin was closed down on the edge of the Hearts after he pounced on to a nice defence splitting pass from Scott Muirhead. Play continued in the direction of Craig Gordon with a free kick on the left side finding Scott Wilson`s head but Pospisal turned the ball behind for the first corner of the match.

Mason fired the loose ball from the defended corner into the packed East Stand but Noel Whelan lay injured and his match finished in the fifth minute heralding the substitution of Andy Tod. Dunfermline were doing all the pressing and in tenth minute there were loud appeals for a penalty as Souleymane Bamba`s challenge appeared to be played off the right hand of Christophe Berra.

Daquin was through on the right and when his shot rebounded back to Simmons the desperate challenge of Berra diverted the ball away from Gordon for a corner. In the 15th minute a Hearts break down the left put the visitors one up as the say, well against the run of play. A Michal Pospisal run to the byeline teased Roddy McKenzie out of his goal and he was retreating when the Hearts no.11 crossed for Roman BEDNAR to score at the near post with a simple toe into the line of the ball. The goal gave Hearts the composure they had been lacking and they began to look like the team of last season. Six minutes after going ahead Fyssas fed Pospisal and he opened up the defence just like the move that created the first goal but this time Bamba was close enough to Bednar to prevent a repeat.

It was a fairly physical affair with free kicks, tumbles and heated words between referee and several players in particular Andy Tod and Phil McGuire. Referee Winters eventually reached for his yellow card and booked one player a side in the 33rd minute. Bruno Agiuar was first in the book for his challenge on McGuire and then Toddy saw yellow for his over enthusiasm inside the opposition box.

Aguiar tested McKenzie with a well struck connection from 25 yards out on the right side but the Pars keeper fisted away to his right with a stylish save. The orange shirted keeper easily clutched the 30 yard free kick sent in from Aguiar in the 40th minute after Bamba had fouled Bednar.

Two minutes from half time Hearts won two quick corners but the defence held firm and the half time whistle brought on an end to an exciting opening 45 in which Dunfermline gave Hearts plenty to worry about. But it was the Edinburgh side who went in on top since it was they who finished and it was hard to recall an incident where Gordon had much to do.

The half was only a minute old when Scott Muirhead went down injured and despite several opportunities for the Pars to put the ball out to allow treatment play continued and Hearts nearly took advantage of the ten men. The Jambos had a glorious chance in 51st minute when Bednar sent Neilson down the right and he produced a great chance that Neil McCann met six yards out and McKenzie was relieved to see the ball rebound off the underside of the bar.

Next Andy Tod headed narrowly wide as he took the touch on from Simmons and the Pars fans were given hope as more corners came the Fifers way. The dark sky meant the deployment of floodlights despite lighting up time being many hours away and Bamba was the Pars shining light as his fine tackle prevented Mikoluinas`s progress into the right side of the home box.

The longer it went the more one wondered where a Dunfermline goal might come from. Tod and Daquin were getting no joy out of Berra and Pressley but from a fairly innocuous throw in Daquin clipped over a ball that Simmons got enough on to to force Gordon to concede a corner on the right. Scott Muirhead had plenty of practice at these and with this 62nd minute corner, his ball into the six yard box sneaked through to SIMMONS at the far post and he turned it passed a most ineffective Aguiar on the post. Shields stuck the ball behind for a corner as Aguiar sped into the penalty box and Bednar worryingly got a fine glancing header on McCann`s corner that fortunately cleared the crossbar. Mark Burchill came on for Freddie Daquin in 72 minutes but the Frenchman really should have put the Pars ahead with his side into a 2-1 lead with his last contribution after he broke through 35 yards out with only the keeper to beat. Freddie dragged the ball right as Gordon came out but he took the ball too far wide and allowed four Hearts men back and instead of picked out Andy Tod with his cross it ended up in Craig Gordon`s hands.

Pressley stopped Simmons to concede a free kick 25 yards out and Calum Woods fired a wicked drive on target but Gordon unconventionally fisted away. Next it was Dunfermline`s turn to defend a free kick on the edge of the box when a crude tackle by Bamba on Cesnauskas just 20 yards out let Aguiar send the ball over the five man wall and on to the crossbar. POSPISAL was quickest to react and turned the ball across goal to the far right post where the ball slipped in as Berra arrived to usher it over. The Pars players protested strongly since in their view Berra touched the ball in an offside position. Scott Wilson collected a yellow card in the protests proved futile.

Worse followed two minutes later as Andy Tod collected his second yellow card of the afternoon and the Pars were down to ten men. Bamba was moved forward and McGuire dropped back into defence as the Pars pushed for an equaliser. Craig Robertson then obviously said something untoward to the fourth official Ian Frickleton and he got a closer look at the red card Toddy had just seen!

Hearts kept coming forward but the Pars held out without looking like salvaging a point. The four added minutes came and went and it was three points for Hearts. The Pars can take a lot from the game since they showed plenty to seriously concern all those pundits who have installed them as favourites to be in the SFL next season.