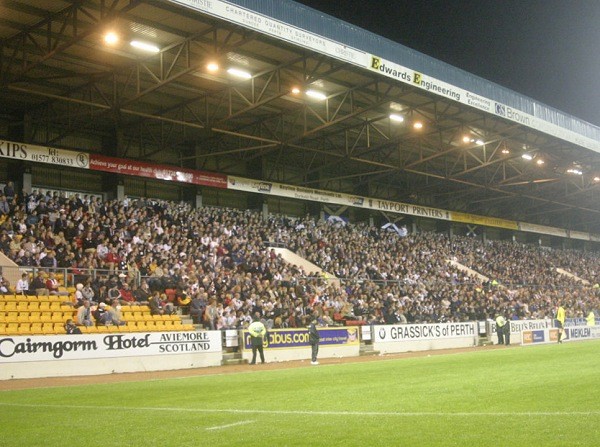 
The Icelandic amateurs made up of car mechanics, plumbers and students showed true Viking style plundering the Pars at Perth with two goals in the last seven minutes to qualify for the next round. After Gary Dempsey put the Fifers ahead in 72nd minute the fans, and possibly the players’ heads, started thinking of Friday’s draw.

Now however the CIS Insurance Cup draw on Saturday is the only hat that Dunfermline`s name would going to be in this week.

It is over 34 years since a 3-2 win over Anderlecht ended Dunfermline`s last European challenge. The Pars first home match in Europe since January 1970 had to grace McDiarmid Park since the Icelandic opposition did not fancy the, UEFA approved, East End Park artificial surface.

At 2-2 from the first leg in Reykjavik it would seem with two away goals as though the tie was firmly in Dunfermline`s favour but all 700 supporters who had travelled to Iceland two weeks ago before knew that this opposition was capable of quick counterattacks and the tie was certainly not over before the second leg kicked off.

There was no Barry Nicholson out with a groin strain so Derek Young took his place. In two other changes from the side that played in Iceland`s National Stadium, Andy Tod and Richie Byrne were left on the bench with Craig Brewster and Darren Young preferred in the starting line up. The Hafnarfjordur team made one change from two weeks ago preferring the pony tailed Jon Stefansson in the place of Armann Björnsson.

The fans, cars and buses were still streaming into the Perth ground as FH Hafnarfjordur kicked off after a five minute delay that was sadly insufficient to let all of the travelling support into the ground. Traffic was queued back on the M90 to Bridge of Earn but the Tayside Police did their best holding sideroads to let the football traffic through.

Just like in the first leg Dunfermline had the better of the opening play. Craig Brewster’s 20 yards shot was deflected wide left for a corner. Andrius Skerla was up for it but could not get close enough but two minutes later he was on the end of another Gary Dempsey corner from the right this time but his good header from 8 yards went narrowly past the left goalpost.

The Icelanders looked in no hurry to get the goal that they needed to progress and Dunfermline continued to take the game to them. Noel Hunt playing wider on the right than of recent, played a quick ball off Greg Shields before trying a shot that was blocked.

FH won their first corner in 19th minute but the low effort in from the left was easily taken by Shields who sent Hunt scurrying up the right. Having beaten off the challenge of captain Heimer Guðjónsson was through on goal but his touch as he reached the penalty box was too much and he lost possession to the defence.

Emil Hallfreðsson who had severely tested Shields in the First Leg reproduced some of those skills to round the full back in 26th minute but his cross was beaten away off the back of Skerla.

On the half hour two more shots were off target at the visitors end. Firstly Darren Young went wide from 25 yards then Dempsey hit one over the crossbar from 30 yards out. The `home` support were being patient and almost had a goal to cheer ten minutes from the interval. Dempsey floated a ball in from the right; Brewster seemed to take two defenders away to leave the ball to drop at Hunt`s feet but the striker delayed the shot and the keeper was forced into his first real save.

Half time arrived still goalless. The Pars had not thrown numbers up as they played with some caution but they had forced the Hafnarfjordur keeper into few saves.

The same pattern continued for the first ten minutes of the second half. Brewster`s header from a 47th minute corner was gathered by the keeper and then when Darren Young`s pass through penalty box from the left was returned off Shields head Mason laid the ball back for Brewster but again a defender dived in to block.

From nowhere Hallfreðsson fired in a 30 yard shot that rattled down off the crossbar and fortunately stayed in play. The visitors were getting more possession, putting more men forward and managing to keep the play in the Pars half a bit more.

Stillie had to be outstretched to turn a Balfour Bett shot from 35 yards out around the post for a corner on the right which was wasted like their first. Hallfreðsson dispossessed Derek Young and after play through Bett and Borgvardt was through but Scott Wilson stepped in to clear.

The visitors kept up the pressure with Hallfreðsson shooting wide right after Borgvardt`s ball had come back off Skerla in 64th minute. Having ridden all the Icelanders attacks Dunfermline then did get back into the match. Shields tried to pick out Hunt in the box and when the ball was cleared Darren Young collected it 25 yards out, controlled it, put it on to his left foot and launched in a shot that the keeper had to save diving to his left.

From looking susceptible to going behind the Pars took the lead. Shields produced one of his characteristic overlaps down the right and swung over a cross that dropped in the centre of the goalmouth about seven yards out. Brewster, Hunt and Dempsey all looked likely to challenge for it but as the ball fell down behind the leaping players it was DEMPSEY who was first to react and he drove it home with his right foot. 1-0

One ahead and only 18 minutes to go. FH would have to score twice to win the tie now and the Pars were certainly starting to play with their tails up. Derek Young had a chance and then Brewster drove a ball across the box that Mason touched on to Hunt but he went wide with the shot.

The clock was going down but with just seven minutes to go FH scored an equaliser. Scott Thomson was left concussed as the players went for a high ball into the box and the ball went forward and left. Ármann Smári BJORNSSON looked offside as he turned the ball in at the post but the Hungarian linesman raced back to the middle and the goal stood. 1-1

Nipper was stretchered off to be replaced by Richie Byrne. Simon Donnelly was also brought on during the stoppage replacing Derek Young; it was now into 85th minute.

FH pushed forward and the Fifers looked in for a nervy ending. A corner was conceded on the right in 90th minute and for the first time Hallfreðsson got some height and distance on his delivery. The ball found its way as far as centre back Tommy NEILSEN who netted from the crowd of players in the centre of the box.

There looked like there was a hand had used somewhere but again the officials saw nothing wrong. The goal stood and the Pars had just the three added minutes to retain their place in the competition. Andy Tod came on for Gary Mason but the tie was out of reach.

The final whistle sealed the exit. A sad end to a tie that could so easily have gone the other way had luck been better. The team was booed off while the visitors were applauded off by a stunned home support. It was simply a matter of scoring one more goal than the Pars. But for two Icelandic goals Gary Dempsey would have been a hero.

So ended Dunfermline Athletic’s involvement in the 2004-2005 UEFA Cup but the Pars fans who made the trip to Iceland will have great memories from the trip not just for the travel complications but also an excellent two days in Reykjavik which was experiencing its second warmest time ever.