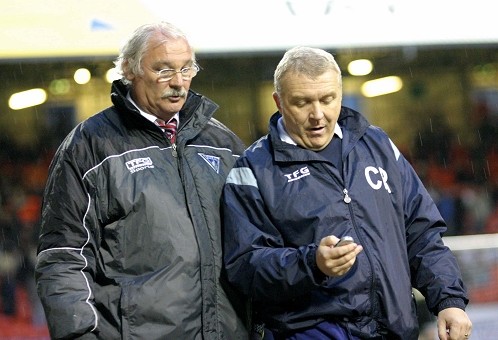 
The Arabs home was fairly deserted as £10 admission wasn`t enough to attract many to Tannadice for this United`s final match of the 2005-06 season. The travelling support was healthy but obviously some home fans did not have the stomach for another defeat in their five match sequence. In fact it was their poorest home attendance in a decade.

Jim Leishman made one change from the side that won at Motherwell, Noel Hunt coming in for the injured club captain, Scott Thomson. Craig Brewster made four changes from the side that lost 2-0 to Falkirk. Youngsters Greg Cameron and Garry Kenneth came in along with the return of the double strikeforce of Jim McIntyre and David Fernandez.

Greg Ross and Mark Burchill got the game underway defending the Dens Park end and although the Pars had the early pressure a Craig Samson punched clearance in the third minute sent Stuart Duff away up the right side to deliver a good ball to the head of McIntyre but fortunately he was wide to right of target.

In sixth minute United pushed forward with Samuel striking the ball wide right to Fernandez. His centre was right to the centre of the six yard box and Allan McGregor picked up from where he left off on Saturday with a fine save at short range off the head of Samuel.

Brewster`s men were in control with every Pars attack petering out. The diminutive Stuart Abbot threaded a pass to Samuel on the quarter hour that was fired on target but McGregor dived to his right to hold with ease. It was midway through the half before Dunfermline gave Craig Samson a testing shot. Bartosz Tarachulski flicked on the ball for Mark Burchill to beat the offside trap but not the keeper with a left footed shot from 10 yards out an angle from the left.

Craig Samson caused his defence some concern in 26 minutes with a one handed stop after Mason`s ball to Burchill was laced into the box and there was a frantic scramble as the defence beat Daquin to the loose ball. Next minute Daquin who had threatened a good ball in from the right all night eventually produced it and Noel Hunt rose 15 yards out to head at goal but his effort dropped wide right. United still looked dangerous and the Pars defence had no time to relax. A corner on the right was knocked out as far as Garry Kenneth but his 29th minute shot was wildly high. The game was sadly lacking goalmouth action and the only further Pars shot worthy of note was an Iain Campbell drive from 20 yards that was deflected for a corner on the left.

At some points the previous night`s World Professional Snooker final seemed to rival this game for its action packed excitement.

The match resumed slowly with United much more interested in raising the game. In 50th minute Ross Gardiner released a fine rocket of a shot from all of 35 yards that raised the home support to their feet in anticipation but they sank back down as the shot narrowly flew wide to right of the Pars goal.

One minute later Charlie Mulgrew had another long shot that went wide left from 25 yards before the Pars created their first real chance of the half. Mason fed Labonte on the right and he drove over towards Freddie Daquin who didn`t really connect well enough and the ball trundled outside the left goalpost.

As it started to pelt down, there was a short chant of support from the Pars fans but the singing in the rain was short lived. United continued to look more likely to score and in 64 minutes were denied a good penalty appeal after Mulgrew`s perseverance on the left side of the box eventually produced a cross into the six yard box. David Fernandez was pulled back as he shot and as a result fired the ball over the bar. McGregor punched away a fierce Mulgrew free kick from 30 yards out before Scott Muirhead came on for Bartosz Tarachulski. Daquin had a shot from distance that went over the bar and then Mason pushed the ball through for Burchill to fire at Craig Samson.

McIntyre fired a good opportunity over McGregor`s crossbar before the appearance on the park of a black cat changed the Pars fortunes. The feline pace impressed the crowd and only minutes later Freddie DAQUIN pounced on a loose ball on the right side of the penalty area and he whacked home into the top corner with his left foot from 12 yards.

United came close to an equaliser three minutes from time when yet another Mulgrew corner from the left slipped through to Fernandez at the far side of the six yard box and his screamer of a shot went across the face of goal and beyond the left post.

That kind of summed up United`s luck. In the end Dunfermline completed Brewster`s misery making it six successive defeats and three successive SPL wins for the first time since December 2003. A win`s a win but there should have been some embarrassment in going back along the A90 with the three points.