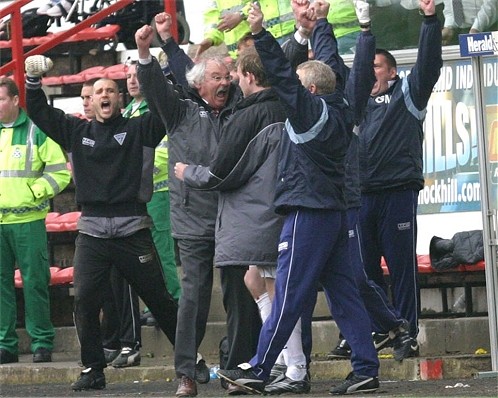 
Jamie McCunnie and Nick Phinn dropped out from the team that drew at Falkirk. Bartosz Tarachulski and Greg Ross came into the side that was looking to kill off Livingston`s SPL lifeline. Livingston who arrived late because of delays on the Forth Road Bridge went with the same team that won the three points from Dundee United the previous week.

Livi kicked off at fourteen minutes past three and they pegged the Pars back in the opening four minutes during which Noel Whelan shot over the crossbar and Allan Walker headed in an attempt that was also wide of target.

Dunfermline came forward with Thomson and Tarachulski carving out a cross from the left that Livi had to be on to quickly to deny Gary Mason.

The match had started with more signs of urgency being shown by the men from West Lothian. The contest was fierce but Dunfermline conceded a penalty in the ninth minute when Greg Ross out on the left side of the Pars box tugged Wes Hoolahan as he tried to get past him. Referee Stuart Dougal judged that the infringement warranted a spot kick and he pointed to the spot. Captain Richard BRITTAIN stepped up and sent a right footed shot coolly past Allan McGregor who had wrongly chosen to go to his right.

A 14th minute corner was won on the left after a strong run down the wing by Muirhead. The former Dons man took the corner himself but when the cross came in Tarachulski headed over from eight yards. Hunt and Burchill tried find a way through the Livi left but the promising move broke down when Labonte`s return to Hunt was not controlled.

Livingston were winning more possession and their passes seemed more accurate than those of the home team. When Dunfermline went forward there were plenty Livi men back to take care of anything Dunfermline were trying.

Tarachulski`s 26th minute never-say-die drive into the penalty area and to the byeline failed to provide a telling pass that would have picked out an awaiting team mate. A free kick for Dave Mackay`s clumsy challenge on Scott Muirhead that earned him the first yellow card of the match on the half hour.

Scott Thomson`s delivery was headed away but only as Scott Wilson who tried a shot and the ball then fell for Hunt who drive a low shot in from 25 yards but the ball fizzed just wide of the left goalpost. Another period of intense pressure could not provide a shooting chance despite the many interchanges, most of which involved Greg Ross.

Muirhead looked to have set up Tarachulski with a simple square pass but the big no.7 could not turn and shoot. Muirhead had a shot that Roddy Mackenzie held with ease and Mark Burchill was put through the middle but again the defence was strong. Drama however in 38 minutes when Stuart Dougal awarded his second penalty of the afternoon.

Bartosz Tarachulski`s flick on header sent Burchill into the centre of the Livi box and as he burst through Harald Pinxten and Roddy Mackenzie squashed the Pars striker out. BURCHILL took the responsibility wand sent the ball into the left of the net for the equaliser.

The goal gave Dunfermline momentum and there followed a number of Pars opportunities that could have given the home team a half time lead.

Scott Thomson`s right footed free kick in from the right was met by a flying header from Scott Wilson but his attempt from six yards went wide left. Two minutes from half time a Hunt cross dropped for Muirhead but his shot from 15 yards was really well saved by McKenzie. From the resulting corner Greg Shields headed right where Burchill connected but sent the ball straight back through the six yard box.

One further opportunity followed before the break but when Burchill set up Ross the keeper again came to the rescue.

The Pars restarted the match, attacking the McCathie Stand end and Hunt was in for an early shot. Things were looking good for Dunfermline and there certainly a lot more optimism coming from the home support. Allan McGregor`s first involvement of the second half was a 51st minute goal kick but Livi then won more possession to pin the Pars back yet McGregor still was given nothing to do.

Aaron Labonte`s dispossession of Brittain just inside the Pars box heralded a break up the right and an interchange involving Burchill and Hunt that was crossed in search of Tarachulski. Livi`s defence were in first but the ball broke for Muirhead to try a shot but again the keeper was not tested.

McGregor should have had something to save on the hour when Hoolahan`s counterattack was punctuated by a fine square ball to the unmarked Healy on the edge of the box but his shot was sent wide right. Three minutes later however it was a different story; from a quickly taken throw in on the right Colin HEALY controlled and then produced a cracking right footed shot from 25 yards out that crept in low at McGregor`s left hand post. Livi 2-1 up with 63 minutes gone!

Livi continued to respond to the rallying call of their noisy support. Brittain drove the ball into the box and a corner on the right allowed Hoolahan to take a quick one to Healy but this time the defence closed him out.

With 17 minutes left Freddie Daquin was brought on for Scott Muirhead as Dunfermline stared an extremely bad result in the face. Noel Hunt switched to the left and he soon created a chance with a pass in to Tarachulski permitted Scott Thomson a shot that Mackay blocked at the Pars skipper`s feet.

A throw in on the right followed but when Tarachulski knocked it down for Daquin the shot was wildly left. The equaliser that was so desperately sought came in 78 minutes. On the right side Labonte won possession and then with a switch from Greg Shields to Gary Mason a long ball was laced through for Tarachulski. The big striker latched on to it and his shot fell back into a central position of the box from where Mark BURCHILL converted with a cool finish.

Six minutes later a Thomson free kick from the left picked out BURCHILL on the right side of the Livi six yard box. His delicate header forced the ball across the face of the Livi goal and over the line.  Noel Hunt followed up as the ball was cleared out at the left goalpost but the goal was given for Burchy`s header. 3-2 and East End Park went mad, that is except for the 1000 away fans crammed into the North East Stand. Every Pars fan was on his/her feet and although there was a moment of apprehension as Stuart Dougal consulted his North stand side Assistant, Willie Dishington, the celebrations were renewed when the referee pointed to the centre circle. Dishington decreed that the ball from Burchill had crossed the line before the ball hit the hand of Noel Hunt. Noel was later to unsuccessfully claim the goal since he felt the ball was not over the line until he headed it in, albeit the ball hit his hand as well as his head. Dunfermline resumed in attacking mode and could have scored more. Hunt provided Burchill in 85 but he shot wide right and a minute into stoppage time Hunt put Greg Ross through but he failed to hit the target. There was no way back for the Lions and when Stuart Dougal`s final whistle went many of John Robertson`s men sank to the ground. Yes Livingston were heading for Division One since even if they win every match, because of their vastly inferior goal difference, they cannot overtake the Pars or Falkirk.

It was one of the most exciting games that East End Park had seen in recent years, one in which it looked as though things were heading in the wrong direction but oh how the fans, players and management enjoyed the three points and the future assured in the SPL. Well done to Leish, Robbo and players.