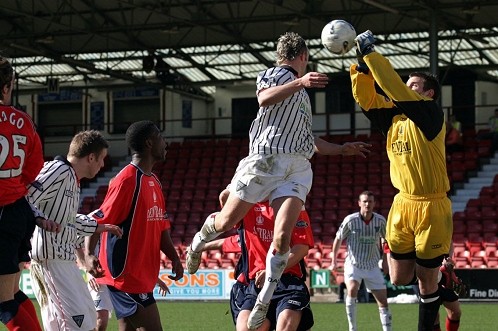 
Mark Burchill and Noel Hunt were back and that meant Simon Donnelly and Andy Tod dropped out from the eleven that started at Ibrox. Lee Makel was out through injury so Jamie McCunnie came into midfield. Falkirk made two changes, Kenny Milne and Daniel McBreen replacing Pedro Moutinho and Mark Twaddle.

The away stand was approaching 90% occupancy as the teams lined up for this local derby. With both teams winning away from home in the previous two matches of this SPL season the fans were full of anticipation as McCunnie and Burchill got things moving with Dunfermline attacking the goal

Falkirk took the early initiative after winning possession and Liam Craig drove forward sending in a ball that Scott Wilson skied clear only as far as Patrick Clegg who released a belter of a shot after only 90 seconds. The shot was stopped by Greg Shields who knew all about the pace of it as he was knocked to the ground.

Dunfermline replied and forced a corner on the left but despite the ball staying around the penalty box the closest thing was a Scott Muirhead cross that Ross and Hunt, 8 yards out, just could not convert. In 12 minutes Noel Hunt brought some magic to the play, beating Milne and then Karl Dodd as he broke towards the byeline. Unfortunately his delivery did not match the break and Dodd cut out the lay off to Muirhead.

Jack Ross hooked away a Burchill header and then from a Muirhead corner from the right Scott Thomson took a shot on the volley that was held by keeper Mark Howard. The yellow shirted stopper was stood down as Tiago Rodriguez blocked a powerful Burchill shot from the left side of the Falkirk penalty box with just 16 minutes gone.

It was all Dunfermline until Craig won a 19th minute corner on the left. The Pars defence coped as Craig got a second chance to swing over the ball. The next time the ball was crossed into the Pars box though it sailed passed Allan McGregor into the left sidenet. Falkirk had opened play up with Patrick Clegg picking out Jack ROSS on the right and his 22nd minute delivery from outside the penalty box simply soared into the net. The Bairns lead might have doubled very quickly. A through ball from Steven Thomson sent Gow and McBreen deep into the heart of the Fifers half but Gow didn`t get enough on the ball to send his partner away allowing Scott Thomson to step in and break down a dangerous move.

Dunfermline were pinned back as their opponents confidence grew. The ball bounced around the Pars six yard box as the defence lived dangerously. A 34th minute free kick taken by Greg Shields launched the ball up field and then a Muirhead free kick sent the ball into the Falkirk box but at no point did the lofty Bairns back four look worried.

A 37th minute corner on the right was fisted away by Howard as Hunt missed Muirhead`s ball into the six yard box. Falkirk countered fast but Gow was offside when another through ball looked like send him through on McGregor.

The 41st minute offered Falkirk another fine chance to score. Milne was chased to the byeline by Greg Ross but the Falkirk no. 15 managed to cross from the left and Ross latched on to the ball driving it square into the centre of the box and as the ball became a pinball Dunfermline survived. Kenny Milne headed the ball on to the crossbar as Dunfermline continued to be pressurised and the home side were happier to hear the half time whistle.

After the interval Dunfermline looked like they understood just how important defeat would be. As it stood Falkirk would leapfrog the Pars into tenth place in the league, but right away Greg Ross fed a ball into the Falkirk box unfortunately Howard was out to save at the feet of Burchill. Three minutes later in 50th minute a deep free kick from Scott Thomson was launched into the Falkirk box and the ball sat up nicely for Mark BURCHILL to drill a fantastic shot passed the flying Howard. A group of twenty policemen surrounded the loyal home support in the North West Stand as the touchpaper on this match ignited. It was definitely game on as both sets of fans and benches urged the sides on. The tussle produced no shots at goal until two arrived in 67th minute - one at either end. A fine move from Burchill through Ross was met by Hunt on the edge of the box and he turned the ball towards goal but was just wide to the right. Then play switched quickly as Alan Gow twisted and turned on the top of the Dunfermline D, fending off Shields and Wilson to send his shot narrowly wide right.

Competition was fierce and Milne`s crashing drive on to McGregor`s crossbar rallied the travelling support into fever pitch. Latapy smashed in a Craig cross that cannoned to safety off Milne. In 78 minutes Bartosz Tarachulski replaced Noel Hunt and Burchill was down by Lecsinel as he raced through the centre. A yellow card was shown and Muirhead fired over the free kick but dogged defending held out.

Falkirk threatened too, as they sprang back with McGregor touching away a fine cross and then it was back to the other end in front of the McCathie Stand. When Tarachulski tumbled with a defender on the edge of the box, Muirhead swung in the ball that was defended only out to Labonte and when he returned it Greg Ross headed into the keepers arms.

Inside the last ten minutes both sides were searching for the elusive winner. It seemed Burchill might have found the way accepting the ball from Labonte to rocket a shot in from the edge of the box that was deflected wide of the left post for a corner. When the corner was taken by Muirhead, Thomson unluckily could not turn that it.

Tarachulski collected a yellow as he tangled with Rodriguez and despite encouragement from the terracing for a winner the match ended level. Satisfactory one would think when news of Livingston`s 2-1 defeat at Motherwell became apparent.