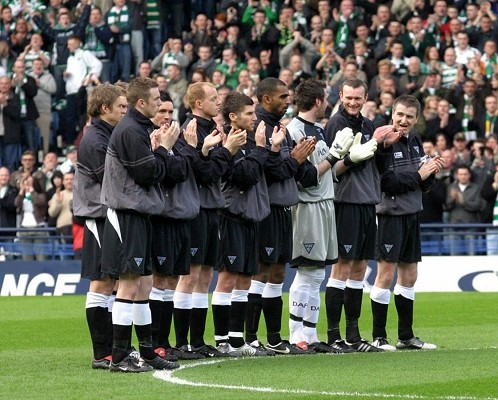 
For Celtic and Dunfermline Athletic it was their first ever meeting in the Final of the Scottish League Cup; Celtic in their 26th and the Pars in their third. Most of the world had written off the Fifers as rank outsiders especially after their disastrous 8-1 defeat at the hands of the opposition just four weeks previously at East End Park. It appeared that Celtic just had to turn up for what would be an appropriate tribute to the late Jimmy Johnstone.

Dunfermline made three changes from the team that defeated Aberdeen. Scott Muirhead was cup tied, Noel Hunt suffered a back strain getting out of his bed on Tuesday morning so he was replaced by Andy Campbell. Starting his first ever match for the Fifers, Frederic Daquin was preferred to Derek Young while Gordon Strachan made only one change replacing the cup tied Mark Wilson with Ross Wallace.

The Pars fans responded to the Skids "Into the Valley" as the Hampden build up reached its climax. The west end of the stadium was awash with black and white chequered flags and the atmosphere was fantastic. The CIS Insurance Cup sat on a pedestal at the end of the tunnel as Jim Leishman led his side out with Sammy the Tammy going mental with a flag. As the teams lined up facing the crowd, birthday boy Scott Wilson waved to a face in the stand. Leishman was so busy taking everything in he almost missed out on the handshaking with the opposition. Celtic players all in white, wore number seven on their tops and shorts.

A minute of rapturous applause prefaced the game as everyone in the stadium joined in the tribute to Celtic legend Jimmy Johnstone. The wee man who scored 130 goals in his 515 appearances for the Hoops was a tremendous entertainer on both on the park and on water. His 23 Scotland caps meant that he was loved by everyone with an interest in football. Everyone hoped that this Final would be a fitting tribute of open attacking football.

After the huddle Celtic stripped off to their traditional hoops and it was the Glasgow side that got the match underway as the sun broke through. Scott Wilson conceded an early corner with a misdirected headed clearance but the Pars survived and there was an early indication of how the Pars wanted to play as Mark Burchill broke fast but could not get through the back three. Lining up 4-5-1 there was no doubt that Burchill was going to be ploughing a lone furrow.

Nakamura`s fourth minute free kick in from the right was not cleanly taken by Allan McGregor but his defence mopped up. A minute later Stillian Petrov burst into the box shaking off Gary Mason but McGregor was able to gather. An 8th minute corner on the right allowed Shunsuke Zakamura to deliver a dangerous left footed cross that Scott Wilson turned on to his crossbar and again the defence cleared with some desperation.

A 10th minute free kick from 40 yards was easily dealt with by McGregor as Nakamura`s attempt was sent in on target. The grey shirted keeper was called into action again when Ross Wallace kept Aaron Labonte in his wake to end with a shot on target. Daquin won a corner for the Pars that took the pressure off his defence but unfortunately Makel could not create any danger. An 18th minute shot from Shaun Maloney was deflected wide for a corner on the right.

Celtic were enjoying the vast bulk of possession but their corner kicks were thus far not finding a route through the Dunfermline defence. Roy Keane`s challenge on McGregor on the edge of the penalty box was penalised thankfully as the keeper carried the ball out of his area. Leishman ventured on to the edge of the park in the technical area urging his side forward as the match entered its second quarter.

A long ball from Scott Thomson found Mark Burchill on the left. He turned it back for Makel to sweep over right for Daquin on the edge of the Celtic box. He played a one two with Greg Ross before releasing a drive into the right sidenetting. Next Andy Campbell was able to send in a cross that Boruc rushed out to hold.

As the half hour mark approached Lee Makel and Frederic Daquin exchanged passes up the right. The progress was halted but taken up by Labonte and even Greg Shields was up to feed Makel a chance he lofted into the keeper`s arms. A Keane Zurawski one two sent the ball wide for Maloney but his attempts to win a penalty at Labonte`s expense were not bought by Stuart Dougal.

Then McGregor was well out to fist clear a Maloney cross but each time the ball was cleared it was not long before Celtic were back in possession. Balde lost control however letting Gary Mason feed Greg Ross and had he put more on his shot then Boruc`s might have faced a greater test with the shot from the edge of the box.

Ross stole possession off Celtic deep into their penalty area and Burchill was just beaten to the ball as he attempted to turn the ball in at the near post. At the other end Greg Shields prevented Keane with a great stop just when it looked ominous for the Pars. Unfortunately the goal was not far off.

In 42 minutes Nakamura picked out Zurawski 20 yards out on the left. The Japanese players played the ball back to Roy Keane whose chip the Pole ran on to. Allan McGregor came out but failed to hold the ball instead it broke off the back of Aaron Labonte and Maciej ZURAWSKI turned the ball into the Pars net from the left goalline. It was a disappointing way to go behind but there was time to recover.

The music at the interval reminded us that "We can be Heroes, just for one day." Burchill and Makel got the second half underway hoping to be just that but it was soon back in the Dunfermline penalty box. A Celtic free kick and then Zurawski corner meant the Pars were quickly on the defensive.

Dunfermline did come forward with Makel threading through a nice ball for Daquin to run on to but a timely interception by Stephen McManus ended the danger. 52 minutes and back on the edge of the Pars box Petrov slipped the ball left for Maloney, he in turn fed the ball left for Zurawski and McGregor had to pull off another fine save to keep the Celts out.

On the hour Roy Keane pulled up with what looked like a hamstring problem just as he was given a chance to burst into the right side of the Pars box. Dion Dublin came on for the Irishman and a minute later Leishman through on Derek Young in place of Andy Campbell.

In the 64th minute Dublin should have scored after good work from Maloney carved a route in on the left. The Celtic sub had a glorious chance close in but picked out the wrong side of the net. Minutes later Petrov despatched a chance over the crossbar and Nakamura too, sent a free kick high over the bar. Dunfermline were surviving leaving them the opportunity to retrieve the cup.

Scott Thomson tried a spirited run up the left but Big Bobo stepped in to stop that. Petrov skimmed the sidenetting tricking a number of Celtic fans into celebration. That was yet to come after a Scott Wilson check 35 yards out gave Celtic a free kick in a central position. Shaun MALONEY stepped up and his neat right footed shot cleared the four man wall to beat McGregor.

In the 79th minute a fine block from McGregor and then sweep up from Shields prevented a third and from the corner Neil Lennon was presented with a shooting chance that he sent over the bar. More corners followed but it was a long shot from Nakamura in 86 minutes that came closest to the third goal. McGregor stopped it but as the ball rolled goalwards Greg Shields slid the ball away from the advancing Dublin and into the arms of McGregor who scrambled back.

Two minutes into stoppage time however a low Paul Telfer ball in from the right was deflected with a delft right footed connection from the edge of the six yard box by DUBLIN into the net as he got in front of Scott Wilson. With that the Pars fate was well and truly settled.

It was a final that Dunfermline never really looked like winning. No embarrassment but only Frederic Daquin`s first half shot ever endangered the scoreline. The Pars third League Cup Final was to end yet again without a goal to their name. Celtic did enough to lift the trophy, Gordon Strachan`s first but at least this was no mauling and confidence-denter.

For Dunfermline Mark Burchill ran for the whole 90 minutes and in defence Greg Shields and Scott Wilson were absolute pillars. The first goal apart Allan McGregor saved Dunfermline time and again and the team worked hard but it was just not to be their day. The third goal flattered Celtic but the green and white ribbons were firmly on the CIS Insurance Cup long before the end.


STRIP: Away all Black