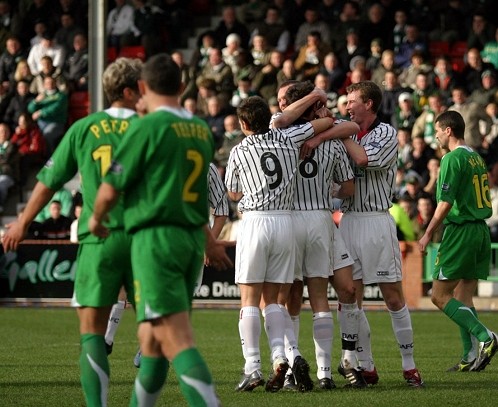 For the visit of top of the table, Celtic Jim Leishman was forced into three changes. Injury to Greg Shields, Noel Hunt and Scott Thomson meant that Yannick Zambernardi, Craig Wilson and Andy Campbell were on from the kick off. Keeper Allan McGregor had recovered from his hip injury but Bryn Halliwell held his place between the sticks. Gordon Strachan`s Celtic side were unchanged from the successful starting XI at Ibrox the previous Sunday.

Maloney and Zurawski got the match underway at two o`clock for the purposes of Setanta with the Pars defending the McCathie stand end. The home side looked comfortable in the opening exchanges but there was just 165 seconds gone when Stilian PETROV deflected a Mark Wilson cross into the Pars net at the near post. The former Dundee United right back took the ball into the left side of the Pars box and got behind Jamie McCunnie to deliver the telling ball from the byeline. In 13th minute Petrov went down looking for a penalty under a tackle from Zambernardi on the left and as the ball broke John Hartson sent the ball looping over the crossbar. A free kick just inside the Dunfermline half allowed play to be taken to the other end. Captain Scott Wilson switched the ball to Zambernardi who launched the ball deep into the right of the Celtic penalty box. Mark Wilson headed behind as Andy Campbell challenged. When Craig Wilson sent over the corner from the right Artur Boruc came out to punch but the ball ended up at the feet of Campbell on the left. The Englishman`s cross perfectly picked out Andy TOD in a central area six yards out and the Fifers were back on level terms. Andy Tod heads in for the Pars after 14 minutes

Five minutes later in 19 minutes Roy Keane`s tackle on Stephen Simmons earned the Pars a free kick on the edge of the Celtic box and Dunfermline fans` expectations began to rise. Mark Burchill took the set piece but with all the target men up curled a shot straight to the yellow shirted keeper.

The rain started pelting down and Pars hopes were also quickly dampened as Celtic again exploited a weakness on the Pars right. Petrov fed Zurawski. His shot was blocked by Bryn Halliwell but John HARTSON was ideally placed to take the opportunity.

Celtic defended a Craig Wilson free kick swung over from the left but Halliwell sprinted out to boot the ball right back deep into the Celtic half where Darren Young latched on to it. Campbell scrambled on to the ball and Scott Wilson`s chip was headed narrowly outside Celtic`s left hand post by Andy TOD.

In 31 minutes Celtic scored a third goal when Hartson played the ball left into the Pars penalty box and Maciej ZURAWSKI sent the ball into the far right of Halliwell`s net. At this stage it was unfortunately all too easy for the team in all green and they were soon to increase their lead.

Gary Mason collected a yellow card for a robust challenge on Petrov and from the free kick the Pars defence looked deep in a Sunday afternoon snooze as a simple long ball picked out ZURAWSKI who took the chance smashing the ball beyond Halliwell at the near post. The half time whistle came as a huge relief to the home team who had struggled after getting back 1-1 after 14 minutes.

Prospects for the second half looked no brighter as the visitors won their first corner of the game within the first minute. Dunfermline did have an early corner themselves but play was soon back under Celtic`s control. A neat Hartson flick sent Roy Keane storming up the right channel but McCunnie came across to mop up.

Mark Wilson swiftly made ground down the left and whizzed the ball through the Pars penalty box with no takers. However the 56th minute saw Hartson, surrounded by three defenders, thread a pass to his right that picked out the unmarked ZURAWSKI who slotted home from 8 yards to complete his hattrick. A 66th minute free kick from Burchill was drilled wide left and with Dunfermline introducing Bartosz Tarachulski and debutee Frederic Daquin the Pars managed a couple of shots that Boruc had to save. Darren Young created a chance evading challenges on the edge of the box to release a shot and Daquin had a go with a chance from the left side of the Celtic box.

In 72 minutes Tarachulski played Daquin wide and his cut back to the edge of the D was struck well but wide right. Two minutes later Celtic struck for a sixth time. A cross swung along the 18 yard line by Zurawski was spectacularly rocketed on the volley into the Pars net off the boot of Shaun MALONEY.

With ten minutes left a swish at a clearance by Tod brought Halliwell quickly out to thwart Dublin from scoring a seventh. The record setting margin of defeat was only two minutes away however. Maloney was buzzing around the area outside the Pars penalty box and when the ball sat up for Neil LENNON 22 yards out he sent it low to Halliwell`s right to complete the Fifers misery. Neil Lennon scores for the first time since December 2001

Lennon was to describe what was just his third Celtic goal since joining the club in 2000 as "one of those JFK moments". His manager just put it down to "great players, playing great." Well more was to come as the great made it eight!

Mark Burchill`s 87th minute free kick was easily held by Boruc but when ZURAWSKI ran on to a long through ball Andy Tod could do nothing to stop the Pole smacking in no.8 in the 88th minute. Halliwell saved from Nakamura at the death but in reality the Pars were well and truly buried long before this.

Dunfermline`s heaviest defeat since losing eight to Ayr United in 1951 and an unenviable SPL record of losing eight goals in a match. This result will be a welcome boost to John Robertson`s Livi and severely dent the confidence for that al important next meeting of the teams at Hampden in four weeks time.