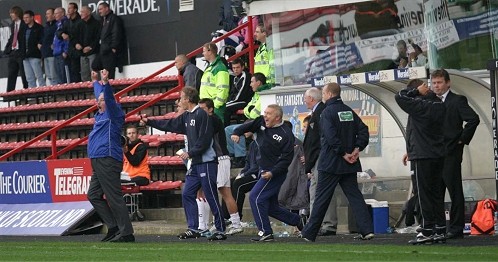 Leishman was forced into making two changes from the side that gave him his first win of the 2005-2006 season at Rugby Park on Tuesday night. Still no Greg Shields, Gary Mason, Mark Burchill or Simon Donnelly. The injured Scott Thomson (neck) was replaced by Andy Tod and although Darren Young made the team sheet he sustained a calf strain during the warm up and was withdrawn before the kick off making room for Greg Ross.

Dundee United made one change from the team that defeated Livingston in their last SPL match versus Livingston; Derek McInnes coming in for ex Killie man Peter Canero.

It was Derek Young and Lee Makel who got the game underway playing towards the half full East Stand but it was United who were first to get into a goal scoring opportunity. Referee Stuart Dougal awarded a free kick just outside the Pars box right side when Yannick Zambernardi challenged Lee Miller. Zambernardi redeemed himself heading clear Barry Robson`s floated delivery.

Next minute Dunfermline came close to notching another early opener when Tarachulski slipped the ball into the path of Derek Young but he clipped the ball over Derek Stillie and the crossbar from six yards. The Pars kept up the pressure with a Horsted ball in from the right after seven minutes that sped through the visitor`s box but Tarachulski just could not convert. Back in front of the McCathie Stand David Fernadez had the ball in the net but the whistle had quite rightly gone for Miller`s flattening of Allan McGregor. Back in possession the Pars won a free kick on the left as Tarachulski was downed by David McCracken. Stillie came out to fist away Makel`s cross and then the United defence blocked a good Greg Ross follow up drive from 25 yards.

United crept into the game as the first quarter neared conclusion, seeing more of the ball but McGregor was dealing easily with the crosses and watching the odd shot well off target. Dunfermline were pegged back and they failed to provide Horsted with passes that could have taken the game away from the Dunfermline half. They might have suffered in 35th minute after Fernandez forced his way through between Wilson and Labonte to shoot from close distance but fortunately over the bar.

The sun came out brightening up East End Park as the game certainly needed something to illuminate it. A Robson run brought a fine save out of McGregor five minutes from the interval but the on loan keeper could do nothing to stop a McCRACKEN header from 8 yards as the defender got on to a Robson free kick swung in from the right a minute later.

United resumed the second half where they had left off and there were hopes that Allan McGregor`s world class save to deny Miller`s header from a Robson free kick in 49 minutes would be a match changing moment. Indeed it looked like it when Liam Horsted beat Mark Wilson on the left side, cut inside beautifully and whistled in a low drive that just slipped wide right.

The Pars support were urging on their team and possession was swinging in their favour. Horsted next skinned Wilson again but Stillie held the shot dropping to his left. The on loan Portsmouth player beat Wilson again to win a corner on the left in the 59th minute. Lee Makel executed a fine delivery and Andy TOD drifted in to head passed his old team mate Derek Stillie. East End was roaring as Horsted ripped Wilson apart yet again and it was looking much better for the Pars. Noel Hunt came on for Derek Young and a 70th minute Ross thunderbolt was deflected for another Pars corner but Makel`s cross was headed wide. Hunt and Ross combined six minutes later to put the Pars into the lead. A late call up to the team Greg ROSS, hammered home from ten yards sending Stillie the wrong way after Hunt, set up by Makel, had worked a route along the United byeline on the right.

Craig Wilson came on for Horsted with eleven minutes remaining and immediately penetrated the opposition defence feeding Hunt before Ross`s shot was deflected for a corner on the left. Hunt met the corner but his header was wide left. The defence then played their part denying United shooting chances and giving Leishman`s men their first SPL victory of the season.

With Livingston picking up a point at Pittodrie the three points from this win over the Tangerines were very important for the Fifers. It took them some time to get the idea of attacking with again Horsted being the secret weapon. Unfortunately for Dunfermline goalkeeper Allan McGregor is not allowed to play against Rangers next Saturday; a real shame because he really turned this match around with his save four minutes into the second half.